LaMar Bunts will help expand the institution’s influence and impact in the world. 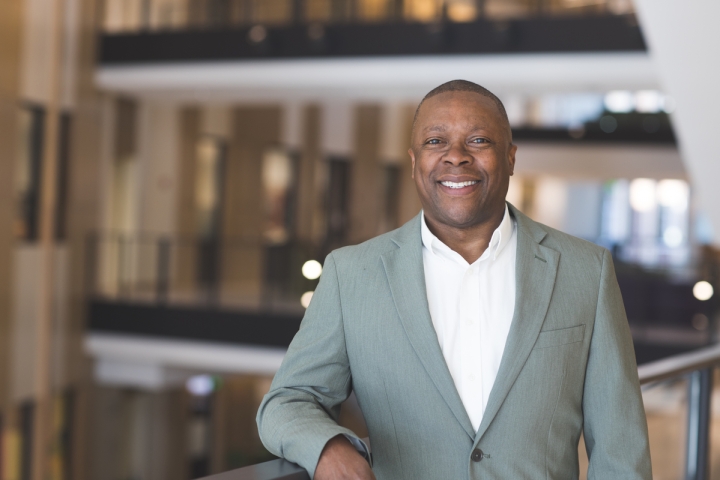 LaMar Bunts is overseeing the launch of the Transformation Office. (Photo by Katie Lenhart)
1/12/2023
More Reading

In a major step toward achieving a top strategic goal for Dartmouth, President Philip J. Hanlon ’77 has announced the appointment of LaMar Bunts as the inaugural chief transformation officer.

Bunts—who comes to Dartmouth from Bitwise Industries, a Fresno, Calif.-based education technology company where he served as chief revenue officer—will lead efforts to amplify Dartmouth’s impact in the higher education landscape. He joined the Dartmouth community on Jan. 1 and will report to President Hanlon and be a member of the president’s senior leadership team.

“LaMar Bunts is the right person to leverage Dartmouth’s strengths and reputation for academic excellence in new ways to new audiences in support of our mission,” says Hanlon. “He is a visionary leader with a track record of helping organizations and startups in the business, education, and nonprofit sectors expand their outlooks. He brings exactly what this role calls for, and I am delighted to welcome him to Hanover.”

LaMar Bunts is the right person to leverage Dartmouth’s strengths and reputation for academic excellence in new ways to new audiences in support of our mission.

Bunts will oversee the launch of the Transformation Office dedicated to expanding Dartmouth’s reach and impact and helping position the institution to compete in the rapidly changing higher education sector, a priority of both the Board of Trustees and Hanlon in the final year of his administration.

The idea is to launch programs that build on Dartmouth’s strengths in creative ways and increase the institution’s financial resilience by finding new sources of revenue. Hanlon points to existing initiatives—including the low-residency Master of Health Care Delivery Science program offered through the Tuck School of Business and the Geisel School of Medicine and Tuck’s Diversity Business Program—as examples of how Dartmouth is already expanding its reach in ways that build on its core mission.

“For the past two years, the board and senior leadership have been taking a hard look at what the future of higher education—and Dartmouth’s place in it—might look like,” says Elizabeth Cahill Lempres ’83, Thayer ’84, chair of the Board of Trustees and a member of the search committee that recommended candidates to Hanlon. “How might we innovate in new arenas while strengthening the education we already provide to undergraduates and graduate and professional school students? Proactively answering this question is critical for Dartmouth’s continuing relevance.”

With a small team that will include a financial analyst and administrative support based in the Class of 1982 Center for Engineering and Computer Science, Bunts says he sees the Transformation Office as “a catalyst that will leverage the resources, teams, and talent that already exist at Dartmouth.”

“What’s exciting to me is that Dartmouth is trying to figure out the future of higher ed in general, but also to develop a model specific to this institution,” he says. “This is a cutting-edge effort that not every institution could take on. There’s deep institutional knowledge here and a large extended network of people who want to be helpful.”

Notably, Bunts says, “Dartmouth has a unique connectivity between its alumni and the institution—it’s one of the strongest networks I’ve ever heard of. It’s just amazing. So that creates a lot of opportunities that are distinctive to Dartmouth.”

Bunts—who majored in economics at Harvard and earned his MBA at Stanford Graduate School of Business—has held senior roles in finance and business operations, including at ITM Software, Silicon Graphics, Dell, and Calbright College, an online college based in California. He also led the international business of the college testing firm ACT. The co-founder and former CEO of the Beanstalk Initiative, a social venture seed-capital company that addresses socioeconomic inequity by connecting young talent with experienced entrepreneurs, he serves on the board of San Francisco’s science museum, The Exploratorium, and has served on the boards of The Barbara Bush Foundation for Family Literacy, BUILD, and Olodum (in Brazil).

Originally from Oakland, Calif., Bunts says the education nonprofit organization A Better Chance helped him attend high school at St. Paul’s School in Concord, N.H., where he developed as an athlete, scholar, and a leader. That experience and the experience of being the first in his family to attend college instilled in him a commitment to giving back.

“My philosophy is that if you help one kid, that could be a leverage point for helping a lot of others,” he says. “I went to some great schools, and I had amazing opportunities after that. I have a lived experience that a lot of my peers at those schools didn’t always understand. I have insights from both sides—a unique experience and opportunity and position. How do I leverage that and pay it forward?”

While it’s too early to preview Transformation Office projects, Bunts says, “In some cases these will be ideas that people at Dartmouth have dreamed of doing but never had the right organization or momentum behind them. In other cases they may be totally fresh, new ideas. We will take into consideration what’s going to be implementable, sustainable, and scalable long term. And one important thing: Not everything we try will work. A lot of times you can learn just from starting and doing. It’s an iterative process. Our plan is to identify a portfolio of things that, if they work well, can compensate for some of the other things we try.”

Dean of the Faculty Elizabeth F. Smith, who served on the search committee, says she has been impressed with Bunts’ ability to bring good ideas to the table from across the institution.

“LaMar Bunts stood out to the search committee for his ability to makes connections among ideas, people, and available resources,” Smith says. “He understands that the goal is to support Dartmouth’s educational and research mission, and ultimately to broaden Dartmouth’s ability to deliver on that mission.”

Matthew Slaughter, the Paul Danos Dean of Tuck, who co-chaired the search committee with Executive Vice President Rick Mills, says, “Change is a constant in higher education and today’s global talent economy more broadly. We at Dartmouth must be nimble and evolve. LaMar brings an exceptional ability to build partnerships across differences that will help realize Dartmouth’s strategic vision.”

The other search committee members were Mary Lou Aleskie, the Howard Gilman ’44 Executive Director of the Hopkins Center for the Arts; Duane Compton, dean of the Geisel School of Medicine; Mitchel Davis, vice president of Information, Technology and Consulting and chief information officer; Tillman Gerngross, a professor of engineering; and Laura Ray, the Myron Tribus Professor of Engineering Innovation at Thayer School of Engineering. The committee was assisted by the search firm Russell Reynolds Associates.