President Hanlon’s goal for his remaining time in office: finish what he started. 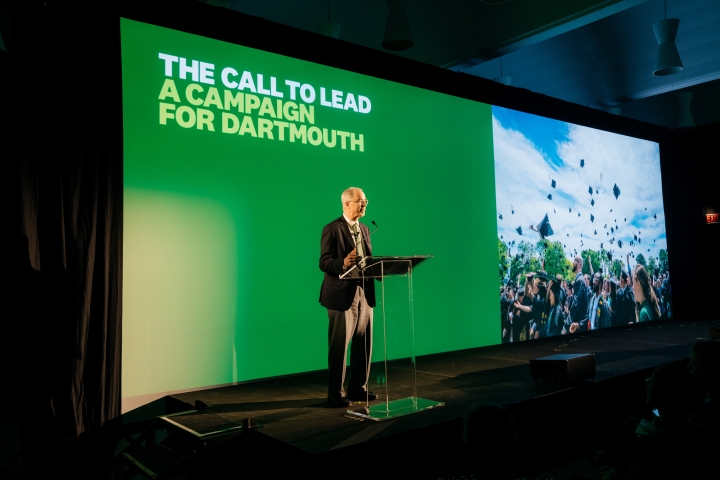 When President Philip J. Hanlon ’77 announced last month that he would step down in June 2023, he received an outpouring of messages of gratitude from faculty, students, staff, and alumni for all that Dartmouth has achieved over the past eight years.

“It’s been heartwarming,” he says. “But we still have some work to do.”

Over the course of the next year and a half, President Hanlon plans to focus his energy on the remaining priorities of his agenda to enhance Dartmouth’s academic enterprise and the student experience, first outlined in two major addresses delivered less than two months into his presidency.

“In November of 2013, I laid out a 10-year vision for the campus. We have done so much of it already,” he says. “I want to focus now on the things that we still have to get across the finish line.”

At the Feb. 21 meeting of the Faculty of Arts and Sciences, Hanlon enumerated five primary objectives for the coming year:

The Call to Lead—the most ambitious comprehensive fundraising campaign in Dartmouth’s history—officially kicked off in 2018. To date, it has raised over $3 billion from more than 90,000 alumni, family, and friends—more than twice what any previous Dartmouth campaign has generated. Over the coming “Year of Gratitude,” Hanlon plans to host events—in Hanover and beyond—to thank all who have contributed.

“We not only want to finish the campaign strong, but we want everyone who has contributed to feel our gratitude,” Hanlon says. “Everyone who gave has made an important contribution to this campus.”

The Call to Lead has supported Dartmouth’s efforts to transform the West End of campus, revitalize Dartmouth’s Arts District, and enhance the student experience through programs such as Dartmouth Peak Performance (DP2), the First-Year Student Enrichment Program (FYSEP), and the E.E. Just Program. It has helped build the institution’s capacity for research and graduate studies by establishing the Guarini School of Graduate and Advanced studies, creating academic clusters aimed at solving problems of global scope, expanding several signature postdoctoral programs, and so much more.

“In many ways the Dartmouth community is beginning to see the impact, with the new buildings that are about to open, for instance,” Hanlon says. “It takes a little longer to get some of the programmatic developments up and running, but people are going to see a lot more in the next few years.”

The campaign’s focus now is on continuing to expand access to the Dartmouth experience through financial aid; investing in a safe, equitable, diverse, and inclusive campus; and launching the Hop renovation and expansion—a cornerstone of Dartmouth’s Arts District. Construction is slated to begin in late 2022.

“The Hop, and the arts, are the heart of creativity at Dartmouth and critical to our liberal arts mission, which is why they are such a central component of the campaign,” Hanlon says.

In November of 2013, I laid out a 10-year vision for the campus. I want to focus now on the things that we still have to get across the finish line.

On the access front, the campaign has raised approximately $400 million for financial aid out of a goal of $500 million. These gifts have allowed Dartmouth to remove loans from financial aid packages for families earning up to $125,000 and waive the parental contribution to educational costs for families earning under $65,000. Most recently, Dartmouth announced a major gift expanding its need-blind admissions policy to include international students.

“Our goal now is to eliminate loans entirely from our undergraduate financial aid packages,” Hanlon says.

While Dartmouth’s recent fundraising success and endowment returns are cause for celebration, Hanlon has said that the funding model for higher education is unsustainable because the costs to provide a high-touch residential education will always grow faster than the traditional revenue base coming from philanthropy, tuition, and federal grants.

For the past year and a half, trustees and senior leaders have been exploring strategic directions that would pave the way for Dartmouth to establish new sources of revenue while better situating the institution within the future landscape of higher education.

These innovative programs—which could, for example, be structured like existing initiatives such as the highly successful low-residency Master of Health Care Delivery Science program offered through a collaboration between the Tuck School of Business and the Geisel School of Medicine, or Tuck’s longstanding Diversity Business Program—will add to Dartmouth’s bottom line, complement the core residential experience, and leverage its reputation in new ways to new audiences, making Dartmouth more broadly accessible to a more diverse population.

“We have a financial, pedagogical, and a moral imperative to pursue these opportunities, and doing so will help Dartmouth lead the direction of higher education well into the 21st century,” Hanlon says. “This is not just my initiative. This is a trustee objective at the highest level.”

The next step is to hire a leader, reporting to the president, whose mandate will be to find ways to explore and move forward with the best of these big ideas while supporting the innovators already working on campus. A search committee is in the process of finding the right person for this role.

A New Model for Arts and Sciences?

Hanlon has asked Dean of the Faculty of Arts and Sciences Elizabeth Smith—in collaboration with appropriate stakeholders and governance committees—to lead a review of the undergraduate college within the administrative structure of Dartmouth. Smith’s mandate is to explore alternative organizational and budgetary models for the Arts and Sciences division, whose budget has long been part of Dartmouth’s centralized operations.

“The primary purpose of this project is to align decision making, priority setting, and resource allocation across all units invested in advancing the core undergraduate mission,” Smith says.

While a decision is unlikely before the end of his tenure, Hanlon expects the review process to help the division better understand if and how it might improve.

“We want Arts and Sciences to feel fully empowered to follow its most creative ideas and most important priorities,” says Hanlon. “It’s about the flow of resources, and also about autonomy and opportunity—being nimble enough to take risks.”

The expansion of the Dartmouth experience to include an increasingly diverse community was the most profound transformation in the institution’s 252-year history. This transformation began 50 years ago, in the 1970s, with the trustees’ historic vote for coeducation, the rededication of Dartmouth to its founding mission of Native education, and the establishment of the first network of Black Dartmouth alumni.

“The recognition of these anniversaries, which symbolize Dartmouth’s decision to open our classrooms to everyone, is an opportunity to reflect on the institution’s past and envision the future that we want,” Hanlon says. “It’s important that we celebrate how far we’ve traveled as an institution and acknowledge the distance we still have to go.”

In the next few months, Dartmouth will release a comprehensive athletics action plan designed to safeguard equity and inclusion in Dartmouth sports.

“Dartmouth is committed to making sure that we are realizing the full potential of all of our student-athletes,” Hanlon says.

A Time of Action

“The next year and a half will be full of action and ambition, because we have important things left to do.”

But Hanlon emphasizes that he will not be working alone.

“I’m so proud of what the Dartmouth community has accomplished in the past eight-and-a-half years,” he says. “It takes all of us to move the institution forward. I feel lucky to have been joined by so many talented, committed, passionate people—students, faculty, staff, and alumni—in doing this work.”