The world-renowned artist returns to Dartmouth this fall for a 10-month residency. 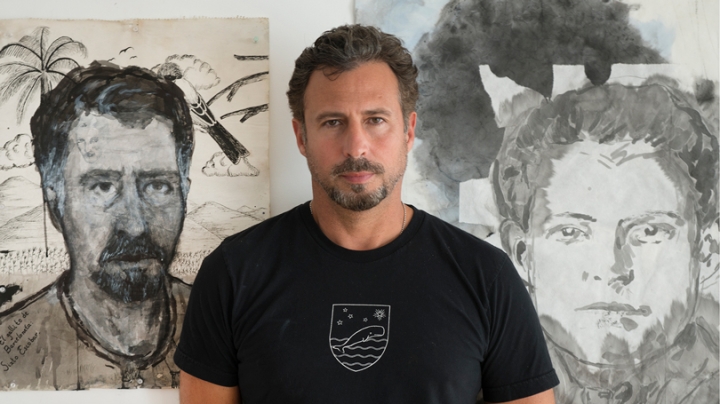 A world-renowned painter and sculptor in whose work, says The Los Angeles Times, “the yearning, aching soul finds its form,” Martínez Celaya is also a physicist who holds patents to several laser devices and has published scientific papers on superconductivity. In addition, he is the author of several books of philosophy, poetry, and art.

His artwork appears in the permanent collections of, among others, the Metropolitan Museum of Art, the Whitney Museum of American Art, and Stockholm’s Moderna Museet—and soon, the Hood Museum of Art.

“The entire arts community at Dartmouth is excited to have Enrique on campus,” says John Stomberg, the Virginia Rice Kelsey 1961s Director of the Hood Museum of Art. “We look forward to enjoying the many contributions that he will make during his stay.”

Martínez Celaya’s 10-month residency begins this fall, but he is already well acquainted with Dartmouth. As a Montgomery Fellow in 2014, he lectured on his art, visited classes, met with students and faculty, and exhibited his installation, Burning as It Were a Lamp, at the Hood.

“I am looking forward to returning to Dartmouth,” he says. “I feel very close to the College and its community, and I appreciate the quality of the students and the faculty. Dartmouth is an exciting place to teach, to learn, and to work.”

Born in Cuba and raised in Spain and Puerto Rico, Martínez Celaya began painting at age 12. He majored in applied and engineering physics at Cornell University, earned a master’s in quantum electronics from the University of California, Berkeley, and began doctoral studies in physics before deciding to pursue art professionally.

He attended the Skowhegan School of Painting and Sculpture and received his master’s of fine arts from the University of California, Santa Barbara. He was tenured faculty at Pomona College and Claremont Graduate University, and was the second Presidential Professor at the University of Nebraska.

As a Roth Scholar, Martínez Celaya will visit classes, deliver a series of public lectures that he plans to publish in book form, and work from a studio in the Hopkins Center for the Arts. Having a studio on campus will allow for additional conversations with students and faculty from different fields, including the arts, sciences, philosophy, economics, business, and history, he says.

“During this residency I hope to become part of the Dartmouth community, offer lectures, mentor students, collaborate with some of the College’s institutes and programs, and prepare projects for my upcoming exhibitions,” he says. Those exhibitions include the Jack Shainman Gallery in New York, Galeria Joan Prats in Barcelona, the CAB Art Center in Brussels, and Galerie Judin in Berlin. He will also be developing plans for a commission that will be installed for the Hood’s rededication in 2019.

The Roth Distinguished Visiting Scholar program was created in 2011 by Dartmouth Trustee Steven Roth ’62, Tuck ’63, his wife, Daryl, and their family to bring exceptional leaders across the disciplines to Hanover to inspire students and broaden the range of intellectual inquiry on campus. The endowment supports the scholars’ research, practice, and housing during the 10-month residency.

Past scholars include award-winning photojournalist James Nachtwey ’70, a Dartmouth provostial fellow; economist Robert Staiger (who has since joined the Dartmouth faculty as the Roth Family Distinguished Professor in the Arts and Sciences); and theoretical physicist Sylvester James Gates Jr.