A new mentoring program is designed to offer support throughout College. 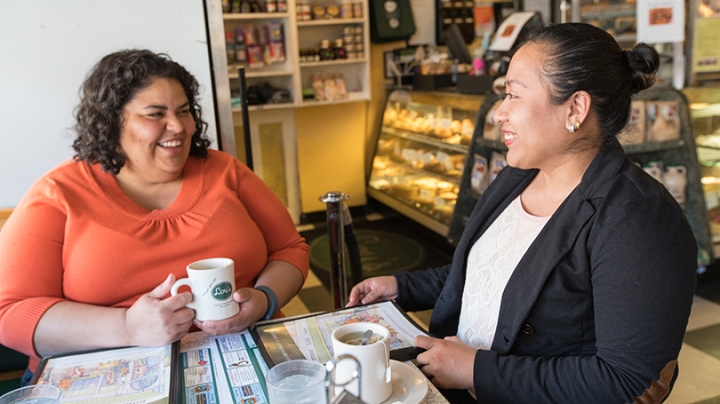 Not every student gets to have breakfast with Senior Associate Dean of Student Affairs Elizabeth Agosto ’01. Deans are busy people, and chatting over coffee and pancakes at Pine, the Hanover Inn’s restaurant, or Lou’s just down the street, takes precious time. But time is exactly what Agosto likes to give Amaris De La Rosa ’16. Time, advice, compassion—all key to the mentoring Agosto is doing as part of the First Generation Network, which pairs staff members with students whose parents have not earned a four-year college degree.

De La Rosa came to Dartmouth from San Jose, Calif. Her parents are undocumented immigrants, and she receives financial aid to cover tuition, room, and board. But she has to buy her own books and earn her own spending money. This, as she told Agosto at one of their recent breakfasts, sets her apart from some of her more affluent peers.

“I came to college with 500 bucks in my pocket—and that all went toward books, so there was nothing left for other things,” De La Rosa said. “People would say, ‘Come on, let’s get a gelato,’ and I would say, ‘Sorry, I don’t have any money.’”

Agosto nodded.  When she arrived at Dartmouth from East Hartford, Ct., she was also strapped for cash.

“I came from a single-parent household. I worked during high school to earn my own money and help my family,” Agosto said. She said she worked 40 to 50 hours a week in college to cover the cost of necessities, but that left no money for extras. “Not being able to go out or take some of the special phys ed classes my friends liked—that wasn’t easy,” she told De La Rosa. But Agosto said things have improved for first-generation students since her time at Dartmouth. “There are more support systems in place,” she said, “and more consciousness of finances.” For example, she said, Dartmouth rarely charges students for activities now.

But extracurricular expenses aren’t the only hurdle for first-generation students. De La Rosa was valedictorian of her high school class, but she struggled academically, at first, in college.

“I was intimidated about speaking to professors when I got here,” De La Rosa recalled. “My peers weren’t intimidated at all, though. They told me professors are just regular people, but it took a lot of effort for me to really reach out.”

Over time, the once-shy student became more confident, not only in class, but within the Latina community on campus. De La Rosa said she “connects” with Agosto because she, too, is active in that community.

De La Rosa has also learned to tap into resources like FYSEP, Dartmouth’s First Year Student Enrichment Program. It was launched in 2009 as a yearlong program providing student mentors for entering first-generation students. The First Gen Network, operated by the Office of Pluralism and Leadership (OPAL), hopes to extend networking and mentoring through all four years.

Jay Davis ’90 directs FYSEP, among other student support programs. He said first-generation students bring not just needs, but strong assets to campus. “They may be less aware of what it’s like to have a roommate; they may be less aware of all the resources a college has to offer; but they have unique strengths, like resilience, perseverance, initiative, and belief in themselves, even though all that can be tested at a place like Dartmouth.”

Rachel Edens, OPAL’s program coordinator for academic engagement and success, facilitates the First Gen mentorships. “We already have 18 pairs and 26 trained mentors, so we are off to a great start,” she said.  That means that there are trained mentors on Dartmouth’s staff—whose parents did not earn college degrees—still available to be paired with first-gen students. There are 449 students who identify as the first in their families to attend a four-year college, which represents about 12 percent of Dartmouth’s undergraduate enrollment, Edens says.

Lately, at their breakfasts, Agosto and De La Rosa have been talking a lot about commencement. Agosto has found College funds to pay for the trip from California for De La Rosa’s family. De La Rosa hopes to get a job putting her engineering skills to work, but she will start the summer living at home again.

“I am getting a little anxious about that,” De La Rosa said. “I feel like I am an adult now, but I am wondering how those family dynamics will be.”

“I understand,” Agosto said. “I was the only one in my family who left home, and sometimes my family was probably thinking, ‘Oh, you think you are smarter than us.’ But we worked that out over time.”

Agosto predicts that De La Rosa will also navigate those shoals skillfully as she searches for a job in engineering—a field Agosto said she has learned a lot about from De La Rosa. “That’s the value of good mentoring,” she said as she sipped her coffee. “You learn from each other.”