In the ceremony, U.S. Army and Marine Corps recruits were pinned with second lieutenant’s bars. 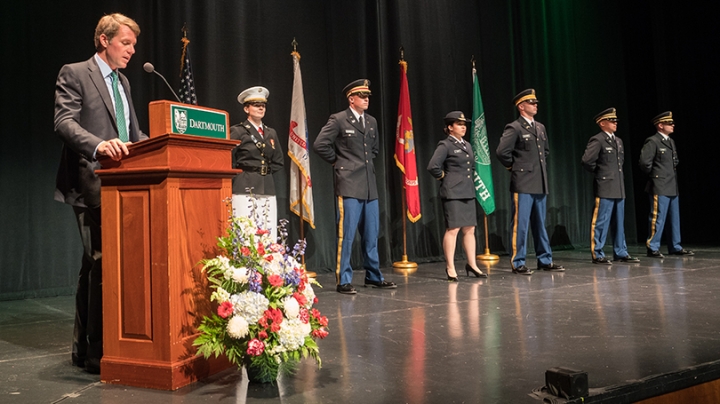 More than 200 family members and guests gathered in Dartmouth’s Moore Theater Saturday to witness the commissioning of five graduating seniors as second lieutenants in the U.S. Army and the U.S. Marine Corps.

Also recognized at the ceremony, but receiving his commission after additional Army officer training this summer:

Clad in full-dress military uniforms, the six graduates marched to center stage, where they were greeted by Dartmouth Trustee Nate Fick ’99, who served as a combat Marine Corps officer in Afghanistan, enlisting after the Sept. 11, 2001, terrorist attacks.

Fick noted the long history of Dartmouth graduates serving in the military. Seventy-three Dartmouth alums served in the Civil War on both sides, and 3,407 served in World War I, Fick said. During and following World War II, the numbers grew beyond tracking.

Fick told the graduates that commissioned rank carries legal authority, but it is moral authority that makes an outstanding officer.

“Legal authority doesn’t last very long when the bullets are flying,” he said. The true nature of leadership was driven home to him by an officer he served with in combat. Fick asked why his men followed him so ardently. “He said it boils down to three words: ‘Officers eat last,’ ” Fick recounted.

Then Fick invited his friend and fellow combat Marine officer Rye Barcotte to address the junior officers. Rye, who will receive an honorary degree at Sunday’s commencement, is cofounder of Carolina for Kibera, a non-governmental organization dedicated to developing local leaders and alleviating poverty in the Kibera slum of Nairobi, Kenya, and he started the clean energy investment firm Double Time Capital.

Barcotte offered three guiding principles of leadership. First, listen. “The most powerful question, when you inherit your first unit, is: ‘How can I help you?’ one-on-one.”

The second, “Try to create a culture where everyone in the unit wants to make each other better.”

And finally, he urged, don’t be passive. “Ask the question ‘Why?’ and make the decisions when a lot is on the line,” Rye said.

Following the administering of the Army and Marine oaths of office, family members were invited to the stage to pin the gold bars of a second lieutenant on the new officers.

Fick then introduced Dartmouth President Emeritus James Wright as a fellow Marine who has been a dedicated advocate for veterans at Dartmouth and beyond.

“You honor us by your dedication and your commitment. As you have learned well over the last four years, Dartmouth is an institution that is enriched by its traditions. Among these, and one that I have regularly encouraged, is a tradition of service.

Wright shared “a word with the parents and grandparents here. I do understand the mixture of tremendous pride and of some gnawing apprehension you feel because of this path your graduate has taken.

“It is a scary world, and these six remarkable men and women have decided that running from that world is not going to make it less scary. And while this decision is theirs, I have a hunch that it is not a surprising choice, for they were brought up to accept responsibility and to try to make a difference.” 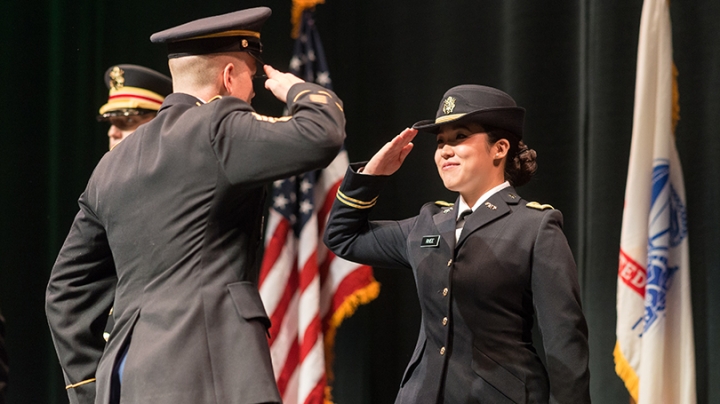