Atifete Jahjaga will be in residence at Montgomery House throughout the summer term. 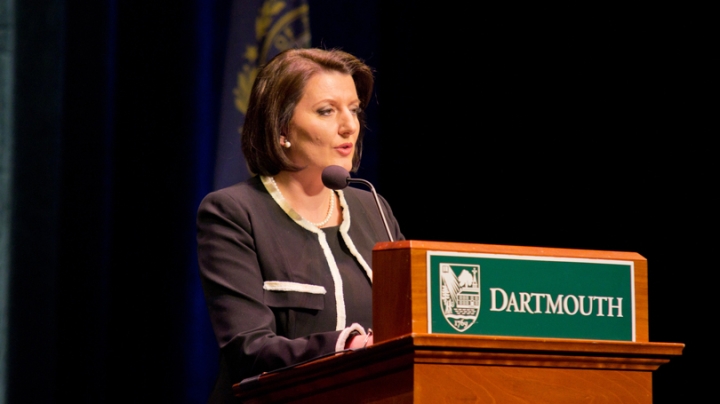 In an earlier visit to Dartmouth, in 2012, Atifete Jahjaga delivers a speech on the challenges and successes of state building in Kosovo. (Photo by Eli Burakian ’00)
6/29/2016
Body

It’s not every day that students and faculty get to engage with a former head of state. But that’s exactly the opportunity the Dartmouth community will have this summer when a former president of Kosovo will be in residence as a Montgomery Fellow.

Atifete Jahjaga, who completed her presidential term in April, was the first female president of Kosovo and among the youngest heads of state in the world when she took office in 2011 at age 36. As president, she has weathered political crises, built international relationships, fought for women’s empowerment and against terrorism, and advocated for Kosovo’s integration into the European Union.

A strong advocate for women’s rights, Jahjaga attended the Women in Parliaments Global Summit in Jordan in May. In an editorial about that meeting published in The Huffington Post, she wrote, “For over a century, we have galvanized our societies to accept the clear reality that women are an inseparable part of the comprehensive progress of any societies, they are agents of peace, of conflict resolution, of state-building processes, and their direct involvement ensures a safer and a more just world for everyone. … It is thus imperative and smart to add the talent of women in the equation to find solutions to our common challenges.”

The residency will likely be an opportunity for Jahjaga to reflect on her presidency and to plan her future. “She’s too young to retire, and too important, I think, to what is going on politically in the world at this moment,” says Montgomery Fellows Program Director Klaus Milich. Jahjaga arrives in Hanover next week.

On Thursday, July 14, Jahjaga will deliver a public lecture on “Women’s Empowerment—Women’s Leadership” at 4:30 p.m. in Moore Theater in the Hopkins Center for the Arts. In addition, Milich says, formal and informal events will be scheduled throughout the term.

The Montgomery endowment, which invites individuals to the College to live, work, and share their perspectives as members of the community, was established in 1977 through a gift of Kenneth ’25 and Harle Montgomery.

“The purpose of the Montgomery Fellows Program is to give students opportunities to meet people like President Jahjaga who have real world experiences—to see the how academic theory connects to everyday politics,” says Milich.

This will be Jahjaga’s second visit to Dartmouth. In 2012 she delivered a speech on the challenges and successes of state building in Kosovo, and awarded former medical dean and physician James Strickler ’50, DMS ’51, the Humanitarian Medal of Mother Teresa for his efforts to implement health programs in the Balkan nation.

Dartmouth has a long relationship with Kosovo, beginning in 1999, when faculty and staff of the Geisel School of Medicine and Dartmouth-Hitchcock Medical Center traveled to Pristina to provide medical care in the aftermath of the war with Serbia. Since 2000, more than 100 faculty, students, and staff from Geisel have participated in an exchange program with the University of Pristina.

Since then, numerous students, faculty, and staff from Arts & Sciences, the Tuck School of Business, the John Sloan Dickey Center for International Understanding, and Thayer School of Engineering have participated in academic and cultural exchanges, collaborated on research and business development projects, and provided technical assistance to Kosovar counterparts. Most recently, five faculty fellows from the University of Pristina were on campus during the spring term, hosted by the Gender Research Institute at Dartmouth and by Tuck.

Montgomery Hosts ‘A Celebration of Making’

Date
1/28/2022
Body
Three master craftspeople will be on campus as Montgomery Fellows this winter.
Image
Thumbnail 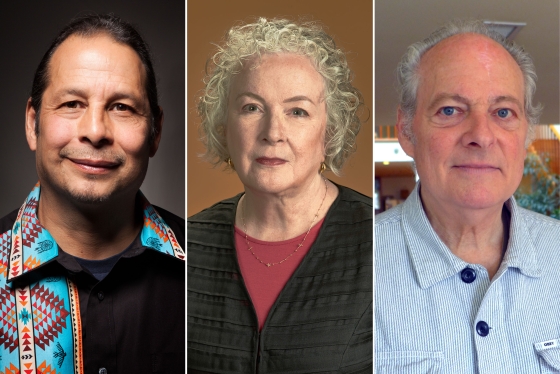 George Floyd Isn’t in the Headlines, But Trauma Continues for Black Men Like Me

Description
George Yancy, a 2019 Montgomery Fellow, examines the experience of Black male trauma within a “post-George Floyd” moment in a modified excerpt of his book Black Men From Behind the Veil: Ontological Interrogations.
Logo
Image