“Dartmouth is lucky to have an instrument like this,” says bell restorer Bob Verdin. 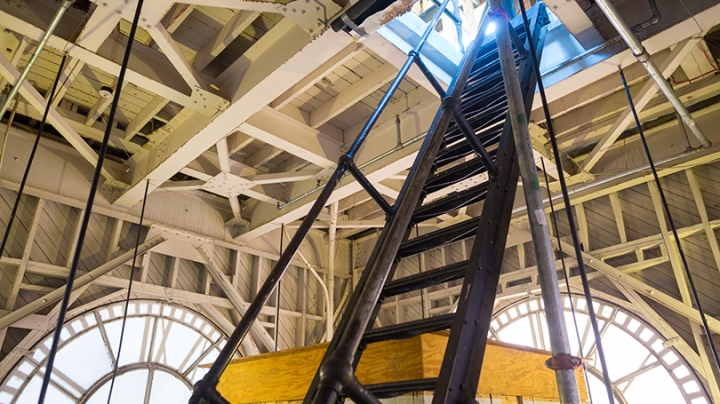 In keeping with tradition, the Baker Bell Tower bells will ring in commencement this weekend. But in mid-June, immediately after reunion weekend, the bells will go silent as the tower undergoes a four-month renovation.

“When the restoration is complete, enhanced outdoor lighting will showcase architectural details of the tower, the Tower Room will be a more convenient study space, with updated technology, and the tower’s structure will be preserved to ensure another hundred years as a prominent feature of Dartmouth’s landscape,” says Vice President of Campus Planning and Facilities Lisa Hogarty.

Facts About the Baker Library Tower and Bells

First constructed in 1928, the 124-foot clock tower at the center of campus has literally stood the test of time. It’s been so well maintained that major repairs have not been necessary until now. The tower will get a new copper roof, a modern control system for the clock and bells, a replica of the original weathervane, and energy-efficient outdoor lighting to highlight the library’s architectural beauty and significance. The ornate Tower Room on the third floor of the library will be updated with improved lighting, USB ports in every outlet, and new flooring.

Carl Jay, who directs historic preservation for the Boston-based contractor, Shawmut Design and Construction, says this project is ideally timed because the tower has not yet deteriorated badly and can be restored to last another century, using more or less the same materials and fine craftsmanship that went into the original structure. He’s especially fascinated by the weathervane, depicting Dartmouth founder Eleazar Wheelock and another man, a Native American, under a pine tree.

“There was a design competition, which is really unique,” Jay says. “The weathervane is nine feet wide and weighs over 600 pounds.” But he says weather, ironically—mostly in the form of acid rain—has weakened the weathervane where it fits into the steel base. The replica will be crafted based on drawings of the original in Rauner Special Collections Library, and the original will be stored for safekeeping.

The bells are still in fine shape—only the rusty bolts holding them to the tower, and the striking mechanisms, will be replaced by Verdin Bells & Clocks, of Cincinnati. Bob Verdin, whose family has been in the business for six generations, says the Baker bells have been well used and well cared for. “Dartmouth is lucky to have an instrument like this,” Verdin says.

Work will begin this month and is expected to be finished by the end of October. The Tower Room will reopen Sept. 23, and tours of the tower will resume Oct. 28. During construction visitors will be encouraged to enter Baker Library by the side doors or through the ADA-accessible lower-level entrance of the Berry Library; if they enter through Baker’s front door they will be directed through a construction tunnel. Scaffolding on all sides of the structure under repair will be enshrouded with a scrim imprinted with a photo of the tower, keeping the scaffolding under wraps and an image of the campus beacon visible from all directions.