Jonathan Vandermause ’16 Valedictory to the College

“In those moments of full attention we become alive to the hidden possibilities all around us,” the student speaker told his classmates. 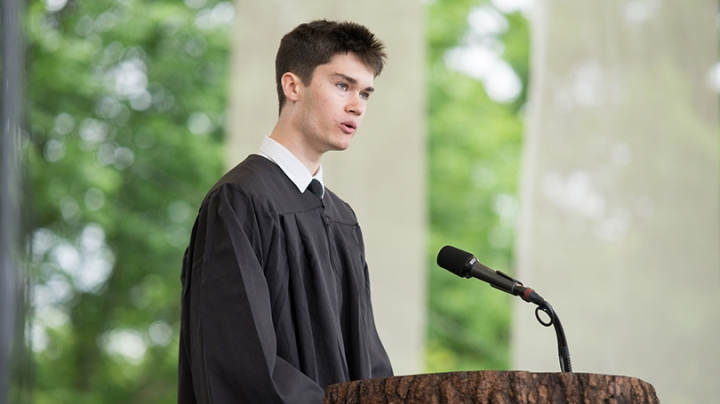 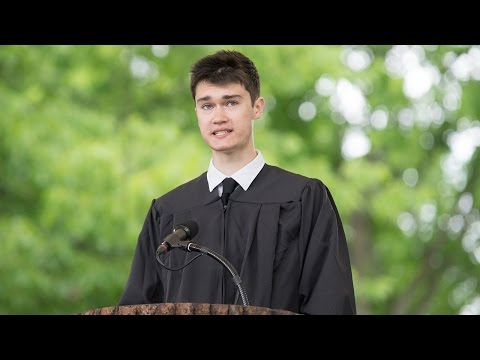 President Hanlon, members of the Board of Trustees, honored guests, ladies and gentlemen, friends and family, and finally fellow members of the graduating class of 2016.

On a hot September night, near the end of trips we were addressed by a professor about how to do well in the four years ahead. The entire trips section—a ragged, foul-smelling band of freshmen who had just emerged from the New Hampshire wilderness—sat cross-legged on the wood floor of the Moosilauke Ravine Lodge, listening attentively to their first Dartmouth lecture. More than three and a half years later, I don’t remember the name of the professor, or even what he looked like, but his words are as clear as ever.

You have to engage, he said. You have to be attentive to the hidden possibilities lying all around you and under the surface of things. Above all else, he suggested, success requires serendipity. Now I didn’t know what serendipity meant so I looked it up. I present to you the hallowed words of Merriam-Webster. Serendipity, noun. The faculty of finding valuable things not sought for.

One of the math courses here at Dartmouth, colorfully titled “The Shape of Space,” is inspired by an eccentric mathematician named John Horton Conway.

Conway loves games. You’ve heard of some of the games he loves, like backgammon or Go. But many of them, you haven’t heard of, because they didn’t exist until he made them up. Cut-cake, Poker-Nim, Hackenbush Hotchpotch. You name it, Conway has probably invented it.

He would play these games endlessly with graduate students, who would often cut class to challenge the great mathematician. As he once remarked, no doubt with a twinkle of mischief in his eye, “that’s my real aim in getting them to play these games: to ensure they don’t do well in math, to destroy all these formerly promising mathematicians.”

The curious thing about Conway is that, for all the time that he poured into these games, he isn’t particularly good at any of them. For him, being good is not the point. He likes to think about the games that he’s created, to reveal their hidden properties. In playing them and studying them, he isn’t chasing after a particular end goal; he is simply exploring what’s there.

In 1969, all this game playing led to a deep discovery, arguably one of the deepest discoveries in 20th century mathematics.

Conway was studying ways to assign numbers to two-player games. In a basketball game, for example, we use integers: the Cavs are up by 10, we say. To his amazement, Conway found games that could only be described by a new class of numbers. Numbers that no one had ever imagined: the so-called surreal numbers. Now the surreals contain all of the real numbers but they also contain infinite numbers and infinitesimal numbers and every possible combination of the three.

As his friend and colleague, Richard Guy put it “by playing trivial games Conway gradually developed their theory to such an extent that it includes the most comprehensive theory of numbers that we now have.”

Here’s what Conway had to say about his discovery. “The surreals were a new world and a very big world, too. You could stop anywhere and pick up a new flower, as it were, and have a look. I walked around for weeks in the daydream thinking to myself, Isn’t this a fabulous world.”

Many of us, in our time at Dartmouth, have gotten a taste of what we adore. We have felt the hours melt away as we sink into something that truly engages us. I hope that we all find that something. Because in those moments of full attention we become alive to the hidden possibilities all around us, to the valuable things not sought for.