“Energetically seek out opposing views and consider them with open minds and open hearts,“ President Hanlon advised the Class of 2016. 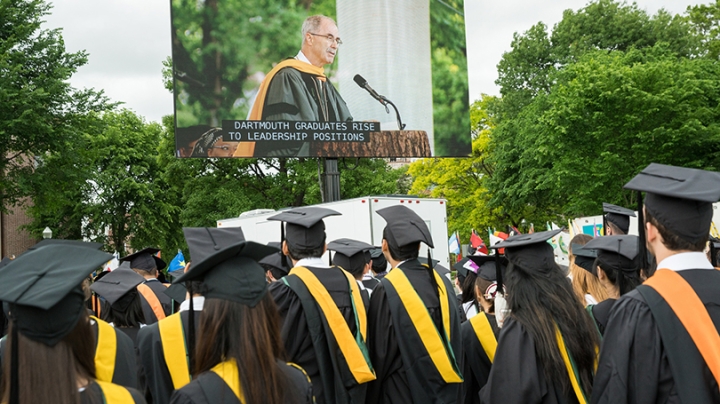 2016 Valedictory to the Graduating Seniors by President Phil Hanlon ’77

So graduates, your day has finally come. Even though the day is cool and a bit cloudy, please know that our hearts are warm and sunny as we celebrate this milestone with you.

And I also want to give a shout out, too, to the parents and families who have offered you so much love and support during your time at Dartmouth.

Now I know as this day has approached, friends, faculty members, parents have given you many words of advice. But tradition dictates that the president gets the last word. And so, a final thought, a final nugget of advice—not unrelated to what you heard from Leymah Gbowee and her inspiring remarks—before you head out into the world.

During my time in graduate school, I had a close friend named Claire. Claire had a particularly memorable grandfather, a bright, engaging man who was proud and outspoken about his conservative beliefs.

So just to be clear, this guy was way out to the right and not afraid to tell you about it. So you can imagine my surprise one day when I came upon Claire’s grandfather intensely poring over Rolling Stone and the Village Voice, and my even greater surprise when he told me that he actually had subscriptions to each magazine!

His response has stuck with me until today. He said, “Young man,”—because he always called me young man—“Young man, I like to keep tabs on what the other side is saying. And you know what? Sometimes they get it right.”

So that sentiment—that it is important, indeed valuable, to listen to opposing views—can seem almost quaint these days. We get precious little in today’s public discourse, and we hear pundits pine for a time long gone of bipartisanship.

In 1960, Americans were asked whether they would mind if their son or daughter married a member of the other political party. Less than 5 percent thought that would be a problem. By 2010, that number had risen to almost 50 percent.

That’s dangerous territory, and not just because it limits the dating pool!

Polarization—around political and a whole host of other issues—it’s hardly a new phenomenon, and I am not the first Dartmouth president to warn of its risks. Indeed, at this very commencement address 43 years ago, my predecessor John Kemeny said, and I quote, “There is a great capacity for human beings to deceive themselves. We see the world as we want to see it. We form friendships with others whose beliefs are identical with our own so that we may continue to tell each other how right we are and how wrong everyone else is.”

But today, the stakes are even higher … because technology makes it so easy for us to isolate and propagate, to find and follow only those outlets and individuals with whose views we align, and then to propagate those views without the perspective afforded by alternative ones.

My one piece of advice for you today is to chart a different course. Energetically seek out opposing views and consider them with open minds and open hearts. Do not fall victim to the superficiality that belies an otherwise illuminating Internet. The answer is not to hide, block, unfriend, or unfollow someone who doesn’t share your view; nor is it to friend, like, share, and follow blindly someone who does. Instead, like Claire’s grandfather, keep tabs on all perspectives.

Now please understand, I’m not asking you to abandon your ideals nor am I directing you to become a centrist. I am asking, however, that you give fair and honest consideration to other points of view, and when you find them persuasive, to let your own opinions evolve.

So why is it important that I offer you this final piece of advice today? Because as I stand here, I am not looking out at any old collection of 1,000-plus young adults. I am addressing you, the latest class of Dartmouth graduates, a cadre of future leaders. Now, I won’t go as far as to say that we expect each and every one of you to become a leader; that would be unfair pressure. But history shows us that it will happen. Dartmouth graduates rise to leadership positions in disproportionate numbers in government, business, science, and the arts—in virtually every area of human endeavor—and I know that will be true of your class, as well.

Leadership requires many skills, of course—honesty, integrity, decisiveness, emotional intelligence, to name a few. But at this moment in our history, at this moment in our time, I would argue that no attribute is more needed in our leaders than the willingness to consider opposing points of view.

If you wonder what that looks like, if you seek a role model in this regard, look no further than across the Green, to Angus King—one of the true independents in the U.S. Senate—who is joining his classmates from the great Class of 1966 as they celebrate their 50th Reunion.

Fortunately, over these last four years, Dartmouth has afforded you a premier liberal arts education. You’ve grappled with complex issues in your studies and you’ve experienced them first-hand through events on campus. And if we’ve served you well, you’ve come away with a healthy dose of intellectual humility—an appreciation that no one person has all the answers. I hope that’s the case and that we have instilled in you further a hunger and respect for the views of others and a willingness to question your own views in the wake of dissenting voices.

As the great 12th century scholar, Peter Abelard said, “By doubting we examine, and by examining we come to the truth.”

Class of 2016—the moment has come. May your days ahead be filled with happiness, success, and a fulfillment that comes from an open mind. And may you always keep Dartmouth close to your hearts.

Thank you, and congratulations!