Student-Athletes Honored at Celebration of Excellence

For the first time in 17 years, the highest athletic award was shared between two student-athletes. 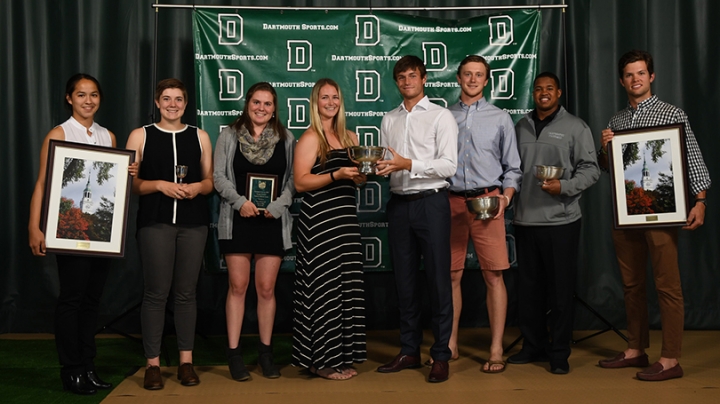 Some of the student-athletes hold their awards after the ceremony. At center, Katie McEachern ’16 and Dovydas Sakinis ’16 hold their shared award. (Photo by Gil Talbot/Dartmouth Athletics)
6/02/2016
Body

Read the full story, published May 23 by Dartmouth Athletics.

The Dartmouth Department of Athletics and Recreation hosted its annual Celebration of Athletic Excellence in May inside Leede Arena, honoring the achievements of teams and individuals for the 2015-16 academic year.

Dartmouth’s highest athletic honor, the Kenneth Archibald Prize, is presented annually to “the member of the graduating class who has been four years in attendance, who has been the best all-around athlete, regard also being had to moral worth and high standing in scholarship.”

For the first time in 17 years, and just the sixth time since the award was first bestowed over 100 years ago, the Archibald Prize was shared between a pair of individual student-athletes as Katie McEachern ’16 of the softball team and Dovydas Sakinis ’16 of men’s tennis were both recognized.

It’s hard to argue against the accomplishments of McEachern during her four years in Hanover, as she leaves an indelible mark on the program’s record book. She hit the most home runs in a season this spring with 12, while also scoring the most runs and recording the best slugging percentage in a season. She also set program records in four batting statistics, most notably 40 home runs and 203 hits.

McEachern was a key component of the Big Green team that won back-to-back Ivy League Championships in 2014 and 2015, leading to a pair of NCAA Tournament berths. This spring, the senior from San Diego won her second consecutive Ivy League Player of the Year Award and was named to the All-Ivy First Team for the fourth time, becoming the first player to accomplish that feat in program history. She was also named to the all-region first team as well as garnering a spot on the academic all-district team.

In singles, Dovydas was an All-Ivy League First Team selection for the third year in a row after playing at the No. 1 position for every match. He finished the regular season with a record of 14-10 and was nationally ranked for the entirety of the two-month season, sitting as high as No. 18 in January. The senior from Lithuania wrapped up his collegiate career as the 91st-ranked player in the nation, while helping the Big Green reach the NCAA Tournament for the first time since 1997.

Dovydas also went 12-8 in doubles action, playing mostly at the No. 1 and No. 3 positions. At the conclusion of dual-match season, the backbone of the men’s team was named the ITA Northeast Region Player of the Year, adding his list of career accomplishments that also included being tabbed as the 2014 Ivy League Rookie of the Year (the first in program history) and the 2015 Ivy League Player of the Year. Last season, he became the first player on the team to qualify for the NCAA Singles Tournament since 1994. Two weeks ago, during the team’s first trip to NCAAs in nearly two decades, he was leading the third-ranked player in the country at the No. 1 position in the third set when the match went unfinished.