“I find it so rewarding,” says one of the participants, Stephanie Colao ’19. 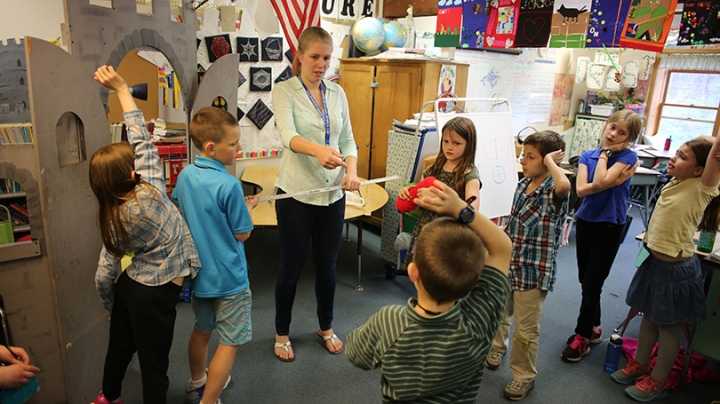 On a sunny afternoon, about a dozen second- and third-graders at a K-12 school in Quechee, Vt., are getting a math lesson. But instead of using pencils or computers, they are drawing and dancing. Three Dartmouth student volunteers are leading the class, and using the arts to teach key concepts—such as symmetry.

This and other lesson plans were devised and delivered this year by Stephanie Colao ’19, Dani Moragne ’17, and Regan Gore ’19 as part of an outreach program sponsored by the Hopkins Center for the Arts called START—Students Teaching in the Arts.

Colao gathers the children in a circle in a classroom at the Mid Vermont Christian School. “We’re going to do kind of a mirror activity,” she tells them. “We’re going to act out symmetry. So I am going to pair you guys up, and you are going to create a 30-second partner routine, kind of like you were mirroring each other. Like you were looking at each other in the mirror.”

She demonstrates with Moragne. “When I get up in the morning, I look in the mirror and brush my teeth,” Colao explains. She pretends to pick up a toothbrush, squeeze toothpaste, and brush, as Moragne, facing her, replicates her movements. The kids get the gist quickly and start miming each other’s actions—chopping wood, for example.

After the mirror exercise comes another action-packed lesson—this one, about measurement. Gore pulls out a ball of red yarn and a yardstick.

“Can you show me how much yarn you need for one inch?” she asks. One little girl stretches the yarn an inch along the yardstick. “How about a foot?” Gore asks. Another takes the yarn to the 12-inch mark.

“What kind of movement could you do with your body if you are only allowed to take up one inch of space?” asks Moragne. One girl wiggles a little finger. Then the children are asked to make up either big or small dances. Some, who have been assigned tiny measurements, barely move. Others help themselves to more space, waving their arms and kicking their legs in the air.

Other schools and other Dartmouth students are involved, as well. The program began in 1990, when a Dartmouth student wanted to help an area school restore arts classes that had been eliminated by budget cuts. This past year, 112 students in grades one through eight were served by 23 START volunteers. The aim is to provide the College students with a learning opportunity off campus, while enriching classrooms in area communities.

At Mid Vermont Christian School, teacher Cheryl Blessing says the Dartmouth students always bring fresh energy into her classroom. “They are very careful to match their lesson plans to state standards, and they also bring their own creative touches. You can see how much the children enjoy them—they just beg me to have them come back.”

The volunteers are more than happy to oblige. “I find it so rewarding,” says Colao. “It’s really important to take time to get off the Dartmouth campus and work in the community, to gain perspective and have a release from the small stresses of college life.”

Moragne agrees. “You learn the importance of integrating the arts in a classroom. I think in America there is an emphasis on STEM classes but you need that creative outlet to really connect the subjects.”

Through teaching, Gore has learned about group dynamics. “When trying to maintain control in a classroom, it’s a lot of give and take. You don’t want to stifle a high-energy kid, but you also want to give all the other kids a chance to say what they want to say.”

Working together, the three have also learned how to pool their own individual talents and interests, harnessing the arts to teach subjects like math, history, and science. At the end of the class in Quechee, they ask the second- and third-graders to tell them what they have learned from this term’s START classes. The answers come quickly.

“I liked when we used yarn to measure things.”

“I learned that when you are dancing, two inches of space might seem like a lot, but really it isn’t.”

“Poetry. I learned that a lot of stuff I didn’t think was poetry is poetry.”

“I liked how we invented things.”

After all the children have a chance to speak, Moragne answers the question herself. “I like START,” she tells them, “because I get to come to your classroom and implement these great activities and you guys are so creative and engaged, and it’s a joy to come every single week.

“So are you coming next week?” a little girl asks.

Yes, Moragne promises, they will be back for one more lesson.

Meanwhile, some of the students’ lesson plans are finding their way more permanently into schools’ curricula.

Mary Gaetz coordinates START for the Hopkins Center. “From the teachers,” Gaetz says, “the greatest compliment is when they say, ‘I am writing that idea down so we can do it again.’ ”