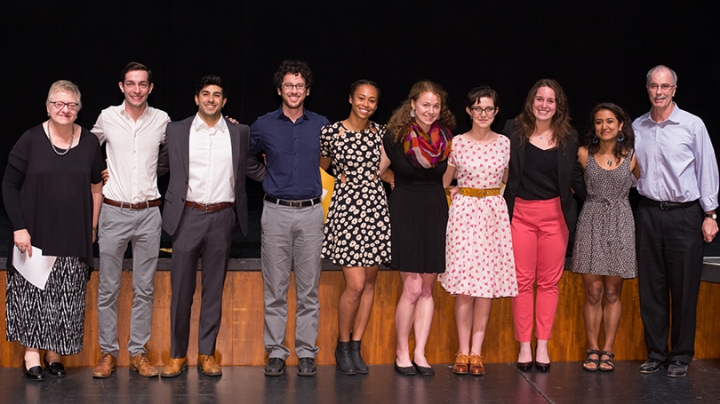 Dartmouth is a place where artists work and thrive every month in the calendar. But one day is special each year, when outstanding students are rewarded for their work, in a wide variety of media, at the annual Arts at Dartmouth Award Ceremony.

Literally kicking off this year’s event at the Moore Theater in the Hopkins Center for the Arts was a high-stepping rendition of “All That Jazz” from this winter’s mainstage production, Chicago. The audience also watched two animated films, by award winners Owen O’Leary ’19 and Lizzy Rogers ’16, and heard a performance of Pablo de Sarasate’s Introduction and Tarantella by Robert Herbst ’16, violin, and Elizabeth Borowsky, piano.

Before the awards were handed out, President Phil Hanlon ’77 praised the many performances and exhibits he and his wife, Gail Gentes, have attended this year. “I would say that Dartmouth is truly alive with artistic energy,” Hanlon said, noting that nearly 90 percent of students visit the HOP regularly for a performance or film, and 65 percent see it as a place to learn, practice or study an art form. About his own cameo appearance at this year’s Dartmouth Idol voice contest, he quipped, “You get what you pay for.”

Among the approximately 75 student honorees was Carene Mekertichyan ’16. She’s performed in several plays at Dartmouth, and her culminating achievement was this spring’s production of Ntozake Shange’s For Colored Girls Who Have Considered Suicide/When the Rainbow is Enuf. She served as dramaturg and played the Lady in Red in the production, which was her senior honors thesis.

Mekertichyan says there was much to learn in Dartmouth’s theater program. “Coming from L.A., I knew a lot about movies and film and that sort of performance, but I didn’t know that much about theater, other than having done shows in high school. I didn’t know the history, about tech, lighting, set design, the important people and eras. I hadn’t gone to see a lot of theater at home, coming from a low-income background,” she said. She won a Warner Bentley/Henry B. Williams Fellowship Endowment and a Mark L. Lebowitz 1977 Memorial Prize in the Performing Arts.

Another award winner, violist and pianist Jimmy Ragan ’16, comes from a musical family and is carrying on the tradition in myriad ways. At Dartmouth he has sung with the Handel Society and the Glee Club, was musical director of the a cappella group the Dodecaphonics, and was a finalist in this year’s “Dartmouth Idol” competition. Ragan was one of four winners of a Eugene Roitman 1943 Memorial Award in music, and also received the Handel Society Chorus Award. This fall he expects to earn his elementary school teaching certificate.

“I’m hoping that when I’m not in the classroom, I’ll be enriching the local music scene, whether through an afterschool program with kids or evening groups for adults, through religious venues or otherwise—just trying to find opportunities to get people excited about it. There’s a lot of music than can be made in any given area if you can provide people with the opportunities,” Ragan says.

There were cash prizes for acting, play writing, costume design, choreography, stage management, creating writing about the arts, film and media production and scholarship, and screenplay writing. Musicians and dancers were recognized for performance, composition, and conducting. Studio artists and graphic artists were honored, too, along with photographers, art historians and administrators.

The ceremony ended with a surprise performance by special guest Michael Rafter ’89, an Emmy award-winning television and Broadway music director. When it was his turn to speak, the stage curtains opened to reveal a grand piano. Rafter took a seat, and spoke from the bench about how much he learned about music at the Hopkins Center.

“I think I spent about half my college years here, within these walls,” he said. After college, Rafter embarked on a long Broadway career, conducting and supervising music for hit shows like Violet, Thoroughly Modern Millie, The Sound of Music, The King and I, and Gypsy. Following his brief remarks, Rafter played and sang his favorite Cole Porter song, which he said sums up his feelings about the close friendships he made at Dartmouth:

“Come the wild, wild weather, come the rain, come the rain
Come the little white flakes of snow, come the joy, come the pain
We shall still be together when our life story ends
For wherever we chance to go, we will always be friends.”