After a Tough Winter, Honeybees Thrive at the Organic Farm

As they check on the hives, student interns learn about the not-so-secret life of bees. 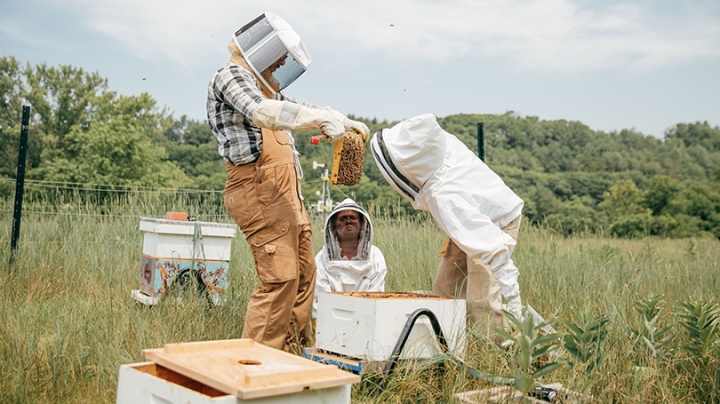 Last winter was tough on honeybees, according to a nationwide survey of beekeepers, and the trend is not encouraging, as mites, erratic temperatures, and changing land use patterns take a toll on apiaries.

But while Dartmouth’s organic farm lost some of its bees in a mysterious exodus—the cause is so far unknown—colonies re-established in hives this spring are doing well.

That was the news from a recent hive check by Laura Carpenter, the farm manager; Thomas Overly, a graduate student in the Department of Earth Sciences; and Craig Layne, a special instructor in the Department of Biological Sciences. Joined by two student farm interns, Marshall Wilson ’17 and Kate Salamido ’19, the investigators began by donning protective white jumpsuits, leather gloves, and netted hats or hoods.

Salamido was careful to make sure she wasn’t exposed to potential stingers.

“I don’t know a ton about bees,” she said, “but I’ve had a deep, ingrained fear of them since I was 6 years old, so this will be a learning and a character-building experience for me.”

Beekeeping at Dartmouth began a few years ago when three graduate students—Overly, Thomas Kraft, and Vivek Venkataramanan—acquired two hives for themselves and began tending them in Norwich. (Kraft and Venkataramanan had studied wild bees in Malaysia.) After a bear invaded the Norwich site, the trio moved the hives to the organic farm and started the Dartmouth Beekeeping Association. The club’s annual membership ranges from 10 to 40 students who learn the basics of apiculture, do research, make beeswax candles, and sell honey.

In the summer, says Kraft, a handful of farm interns tend the hives, guided by Carpenter, who is learning the art of beekeeping from Kraft and Layne. Wilson sees beekeeping as a valuable part of his internship, and an important aid to agriculture. “So many of the vegetables we harvest are things like tomatoes, squash, and watermelon, and you can’t have fruits of plants if the flowers don’t get pollinated. So having bees on site helps us have higher yields and get better food faster,” he said. 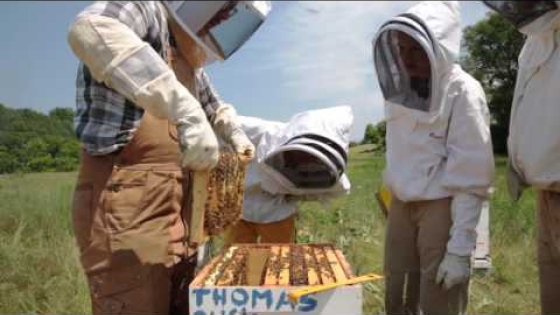 The inspection team strolled down a narrow path through high grasses to a square enclosure, surrounded by a solar-powered electric fence to ward off bears, raccoons, and other wild animals. Carpenter switched off the power and lowered one wire so the group could step inside.

They got right to work, opening the first of four wooden boxes holding honeycombs. The combs are built out of wax on flat frames by sterile female worker bees. Each box contains about 10 frames, standing upright, side-by-side, like pieces of toast in a toaster.

“We want to see if these bees are healthy and producing lots of offspring—we’re looking for all the life stages of the population. We’d love to spot the queen, or at least eggs, to prove that she is still alive and well,” said Layne.

Carpenter used a small pry bar to lift the top of each box, loosening the sticky frames and holding each one up to the light. Some bees flew into the air. Others, apparently disturbed by puffs of smoke from the can, dove deeper into the box. But the majority buzzed on the surface of the frame, crowding so closely that it was hard to see the hexagonal cells under construction. Cells store larvae, pollen, nectar, honey, and water. The inspectors wanted to see if the brood had filled out enough frames to justify adding more boxes on top, called “supers,” to allow more room for honey-making.

Carpenter showed one of the frames to Wilson, who was standing by. “That’s capped larvae,” she told him. “See how it looks different from honey in the cells?”

Still searching for the queen, Carpenter kept opening more boxes until finally, the monarch appeared, in the process of laying an egg.

“So now we know the colony will keep growing,” said an obviously pleased Carpenter.

More excellent news—in the boxes, there was no sign of deadly mites on the bees’ backs. But as a preventive measure, Overly threw in a few sprigs of thyme.

“They hate the smell of thyme,” he explained. “They try to clean themselves after they get near it, and as they do that, they also remove any mites they might be carrying. Just good hygiene.”

As Carpenter closed the lid on the box, Overly said, “Wow, that’s a healthy population.”

The two-hour inspection was a success. The group headed back to a storage shed, where they took off their heavy white suits. It had been a good morning for beekeeping.

See more photos of students and staff working at the apiary at the organic farm. 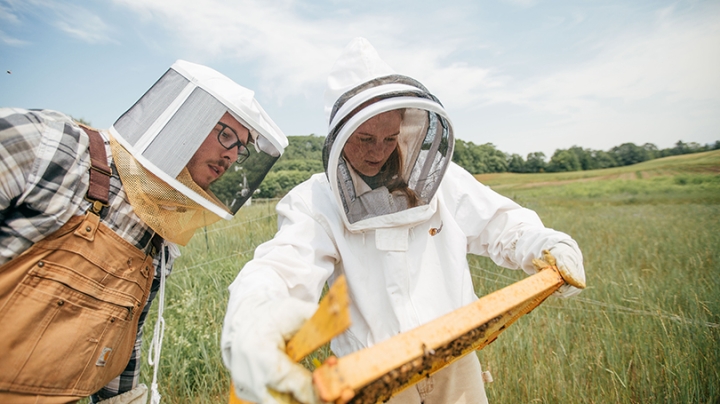 Marshall Wilson ’17 helps Organic Farm Manager Laura Carpenter search for the queen bee during a hive check at the College apiary. (Photo by Robert Gill)
Written by
Charlotte Albright
Share this
FacebookTwitterEmail
In the News