“The modern world is experiencing a crisis of liberalism,” says Professor Susannah Heschel. 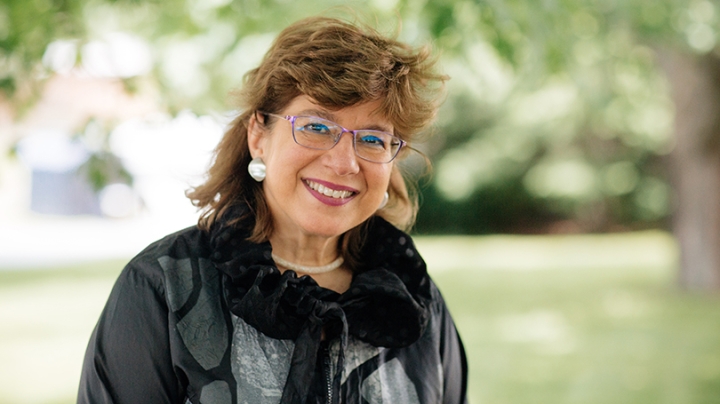 Nearly 25 percent of Dartmouth sophomores take Jewish Studies classes in history, religion, Hebrew language and culture, anthropology, and government. That’s a sharp increase over the past decade, and it’s one reason the Faculty of Arts and Sciences has recently granted permanent status to the program. Chair Susannah Heschel, the Eli Black Professor of Jewish Studies, says many other colleges and universities are lamenting a decline of interest in Jewish Studies, but not so at Dartmouth.

“We have serious and thoughtful scholar-teachers,” she says about the interdisciplinary program, “and students who really do want to study. Their interest changes over time, but right now many students really want to know more about the modern period.”

Most of those students are not Jewish, says Heschel. “For example, many Native American students come into my classes and see parallels with Jewish experience: the intertwined nature of their identity that includes history, language, religion, ethnicity, and culture. Jewish students discover aspects of Jewish history and religion that they had never known.”

The courses are popular: This summer, 246 students are enrolled in the three Jewish Studies classes that are being offered, about a quarter of the sophomore class.

Some students are in the class because they read stories about the Middle East conflict in the news every day and want to understand the background.

Their Jewish Studies classes also help them understand why the modern world, Heschel says, is experiencing a “crisis of liberalism.”

“The fervor of attacks against Muslims in this country and elsewhere helps students understand anti-Semitism,” she says. “Or, to put it another way, the study of the history of anti-Semitism helps students understand the kind of attacks that one hears of today directed against Muslims, African Americans, and so on. I think some scholars in the field of Jewish Studies have sharpened our powers of analysis.”

Sharp analysis is what Heschel models and asks of her students in “History and Culture of the Jews,” one of three popular courses she is teaching this summer. A lively discussion topic: Shylock, the Jewish moneylender in Shakespeare’s Merchant of Venice.

“What kinds of stereotypes emerge from this character?” she asks the roomful of nearly a hundred students.

“That they are blamed for the crucifixion,” another adds.

For the next hour, Heschel and her class explore the politics of prejudice—how England, Spain, and France expelled Jews or forced them to live in crowded ghettoes.

Ashwath Srikanth ’18, a history major, is taking the course to broaden his understanding of Judaism. “History is not just important figures and battles,” he says. “It’s also learning about different cultures and heritages that we all share in the United States and around the world.”

An observant Hindu whose parents emigrated from India, Srikanth says he wants to learn more about Jewish immigration to the United States. “They have overcome long prejudice tobuild a position of power and respect in this country, and it’s important to follow that evolution,” he says.

The Jewish Studies Program, like several others on campus, fosters cross-cultural education, says N. Bruce Duthu, the Frank J. Guarini Associate Dean of the Faculty for International Studies and Interdisciplinary Programs and the Samson Occom Professor of Native American Studies.

“Jewish history, intellectual thought, and cultural and religious traditions are vital components of our national story and the unfolding of world history,” says Duthu. “Our students recognize this as evidenced by ever-increasing enrollments in Jewish Studies courses. This is a notable moment for both Dartmouth and this program."

The next lecture sponsored by the Jewish Studies Program will be given by Edwin Seroussi, of Hebrew University. He’ll trace the history of Israel’s national anthem, Hatikvah (“The Hope”), at 4:30 p.m. on Aug. 2 in Moore Hall’s Filene Auditorium. The event is free and open to the public. 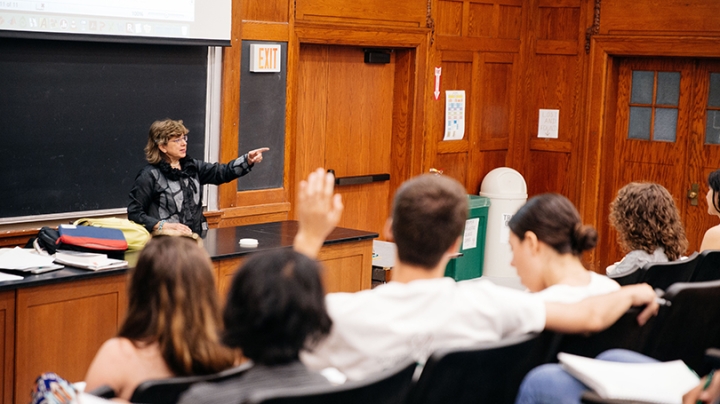 Professor Susannah Heschel takes a question from one of her students. (Photo by Robert Gill)
Written by
Charlotte Albright
Share this
FacebookTwitterEmail
In the News