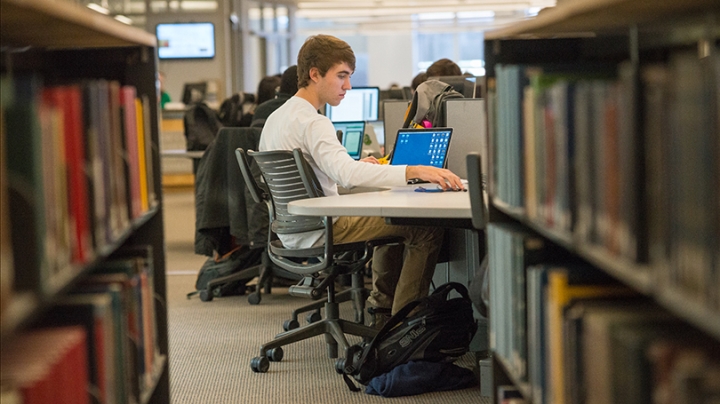 At Dartmouth and elsewhere, it’s getting easier for scholars to find readers—and vice versa. Research is moving from print publications to the Internet, and the business model for academic publishing is changing rapidly.

For decades, authors have been submitting scholarly manuscripts to journals, which charge a subscription fee to defray the costs of publication. But Barbara DeFelice, MALS ’99, director of digital resources and scholarly communications programs at Dartmouth’s libraries, says that pathway is becoming problematic.

“The system is in turmoil now,” says DeFelice. “Let’s say a faculty member authors a paper, at no financial gain beyond the salary they earn at their institution, and submits that to a journal, and typically transfers rights—a copyright or license—to that publisher. The publisher provides marketing and packaging and availability on their system and then charges others to read the article."

The problem, says DeFelice, is that many journals that used to be small, independent, and relatively affordable for subscribers have been swallowed up by large, publically held companies that have increased subscription rates, either for the journal or per article—to more than some readers are willing or able to pay.

Rising rates can also cause libraries—even some as large and well-funded as Dartmouth’s—to cut back on the number of journals they subscribe to. That’s contributed to the demise of small publications. So, says DeFelice, some authors are seeing their outlets and audiences shrink. And readers, both inside and outside academia, are losing access to groundbreaking scholarship.

Elizabeth Kirk, associate librarian for information services, says the traditional model—collecting money from readers—worked fine when most scholarship was printed on paper, and publishers sought subscribers willing to pay for peer-reviewed research. But now that people are turning to the Internet for information, the tables are turned—readers are doing the searching, for content, and Kirk says subscription and article fees are “a paywall that keeps people out.”

Authors are also finding that giving their manuscripts and transferring publishing rights to traditional scholarly journals are causing problems for online education. For example, says former Dean of Libraries and Librarian of the College Jeffrey Horrell, instructors who want to share their own scholarship through massive open online courses, or MOOCs, are running into roadblocks.

“A Dartmouth faculty member wanted to use a portion of a textbook he wrote, and put it on his MOOC site, but could not get permission from his book publisher, so basically he had to re-vamp the whole approach to the course,” says Horrell, who retired July 1.

For all these reasons, some leading research institutions worldwide, Dartmouth included, are trying to make information more widely available by launching what they call open access policies and publications. In general, open access journals don’t charge readers; they charge authors to publish their work. But at Dartmouth, that cost can, in many cases, be borne by the library.

David Peart, a recently retired professor of biological sciences, is a proponent of open access policies and funding. “Faculty members want their work cited,” he says. “All the studies I’ve seen of citation rates say that open access articles are cited more often than work published in subscription publications.”

Peart says open access research is also more widely shared via social media, and can be more easily mined for data such as tables and charts.

“Out there in society, around the world, having access to research that’s relevant to government policy, healthcare, and industry—that’s just a no-brainer.”

With Anne Kapuscinski, the Sherman Fairchild Distinguished Professor in Sustainability Science, and several other Dartmouth faculty, Peart helped launch an online, peer-reviewed science journal called Elementa, which covers atmospheric science, earth and environmental science, ecology, ocean science, sustainable engineering, and sustainability sciences. Horrell says a nonprofit publisher, BioOne, played a key role in funding and establishing Elementa, and that Dartmouth collaborated on its founding with the University of Colorado, Georgia Tech, the University of Michigan, and the University of Washington.

Peart says such publications are thriving as more authors contribute to them and more readers discover them online. True, he says, some scholars, especially younger ones, worry that they might be denied tenure if they stray from more traditional publication paths. But those fears, he says, are proving largely unfounded.

Wide support for Dartmouth’s new open access policy and funding can be found in an online poster exhibit called Open Dartmouth: Research, Data, Code, Ideas, which includes portraits of 34 faculty and their comments. For example, Kevin Reinhart, an associate professor of religion, says, “The Dartmouth faculty open access policy liberates our scholarship from proprietary presses. It is ethically imperative to make my scholarship available to my colleagues worldwide and to my sources, Turks and Arabs, whose history and culture I am helping to construct.”

Associate Professor of Anthropology Jeremy DeSilva says open access publication of his research into human evolution “allows everyone to share in this journey of discovering who we are and where we come from.”