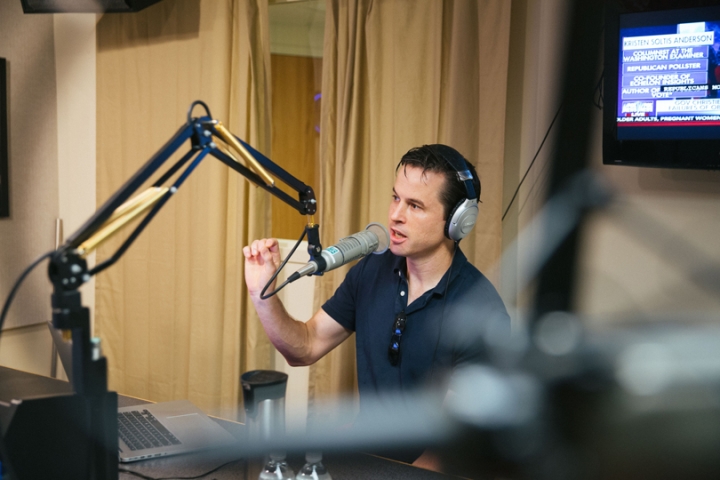 Professor Brendan Nyhan speaks to the BBC from the Dartmouth radio studio about political fact-checking and the candidacy of Donald Trump during the GOP Convention this week. (Photo by Robert Gill)
7/22/2016
Body

There is wide agreement among Dartmouth political scholars that this year’s GOP convention breaks the mold for any party’s selection of a presidential nominee. A number of professors at the College offered short takes on the events in Cleveland surrounding the nomination of Donald Trump.

This is a convention unlike any he has ever seen, says Professor of Government Brendan Nyhan.

“I've never seen a candidate come out in front of a smoke machine before,” he says.

Nyhan, a contributor to The New York Times Upshot column whose research addresses, among other things, the effects of fact-checking on politicians, says political conventions have traditionally served to unify a party before the general election campaign.

“What that means is that all the craziness around the Republican convention is potentially consequential. If the coverage of the week is all about plagiarism, and who wrote what speech, and the divisions within the party, that may fail to coalesce the party in the way Trump needs,” he says.

But it is unclear whether these old rules still apply in this era of extreme polarization, he says.

“It may be enough for many people, not everyone, but for many people, to simply hear ‘Hillary is bad.’ This kind of negative polarization is powerful. People are saying in record numbers they’re voting against a candidate, not for their preferred candidate,” Nyhan says.

Randall Balmer, the John Philips Professor of Religion at Dartmouth and author of The Making of Evangelicalism: From Revivalism to Politics and Beyond, has written extensively on the religious right’s longstanding ties to the Republican Party. This link has brought about an alliance with a candidate who differs with evangelicals on many issues, he says.

“The leaders of religious right have really painted evangelicals into a corner. When they cast their lot with the far right in the late 1970s, they effectively made themselves into a one-party interest group, so now they're stuck with a nominee who has virtually no discernable religious views or sympathies—or characteristics, for that matter,” Balmer says.

Trump’s pick of Gov. Mike Pence of Indiana, a high profile evangelical Republican, may boost many evangelicals’ enthusiasm for the ticket, Balmer says. “But regardless, the habituation over the last several decades brought many to the point that they can’t even consider someone who doesn’t have an R behind his or her name.”

Economics professor Douglas Irwin, the John Sloan Dickey Third Century Professor in the Social Sciences, has been widely quoted on the effects of foreign trade on the U.S. economy and how these issues have played out in the presidential campaign.

The Cleveland convention has not presented any economic policy ideas from the Trump campaign, Irwin says.

“The Republican convention has been so roiled by controversy and division that any coherent economic or policy message—if it exists—has been completely lost,” he says.

Irwin, who served on the staff of the President’s Council of Economic Advisers during the term of President Ronald Reagan, says Trump’s statements about negotiating better trade deals around the world have been too vague to analyze.

“In an interview with The New York Times, Trump has made it clear he doesn't really understand NAFTA or have a clue about how he would strike a ‘better deal’ to bring jobs back to America,” Irwin says.

Associate Professor of Government Joseph Bafumi notes that despite many missteps during the convention, Trump has gained slightly on Clinton in recent polls.

“I think there are a number of reasons why Trump has weathered bad press after missteps including people’s distrust of the media, and their reliance on media sources that corroborate predispositions,” Bafumi says.

Widespread disdain for the polarized politics and the tendency to look for change after one party has held the White House for eight years also play into Trump’s capacity to sell himself, Bafumi says.

“He certainly proves to be a very adept salesman.”