The president joins an alumni expedition to observe Dartmouth’s impact in the Arctic. 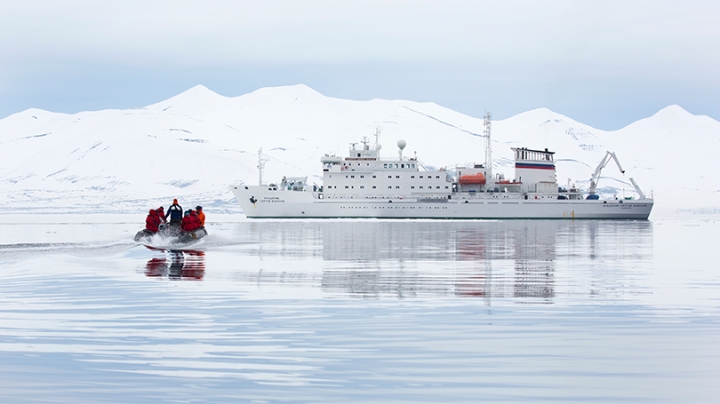 The president will be sailing on the scientific research vessel the Akademik Sergey Vavilov, built in Finland to conduct oceanographic soundings and now refitted as a tourist vessel. (One Ocean Expeditions/ Ira Meyer)
7/27/2016
Body

Next week, President Phil Hanlon ’77 and his wife, Gail Gentes, will take a look at Dartmouth’s impact in one of the most remote places in the world—the Arctic.

With a group of about 30 people—mostly alumni and their families—Hanlon and Gentes will be part of a 10-day expedition to Greenland and the Arctic Circle led by Ross Virginia, the Myers Family Professor of Environmental Science and the director of the Institute of Arctic Studies at the John Sloan Dickey Center for International Understanding.

“Gail and I are excited about participating in this trip, and especially seeing firsthand the field research of Dartmouth’s students and faculty, who are shaping our understanding of one of the most critical issues of our time: the effects of rapid climate change around the globe,” says President Hanlon of the trip, which is sponsored by Alumni Travel.

Virginia says he hopes Hanlon’s experience will be important for the president both personally and in terms of his understanding of Dartmouth’s engagement in the Arctic.

“The remoteness and the scale of the Arctic are very powerful, and it’s an amazing place for personal reflection,” Virginia says. “Beyond that, I think he will recognize that this is a place where Dartmouth has had an impact—and it’s a place where a lot more is needed in terms of science, of understanding culture and culture change, geopolitics, sustainable development. I think it will become easier for Phil to understand how Dartmouth can make a difference up there, and how a difference in the Arctic is a global difference.”

Dartmouth’s history in the Arctic dates back almost as far as Dartmouth’s history. “You can go all the way back to John Ledyard (Class of 1777) and his trek across Siberia, hoping to establish a fur trade from Russia to Alaska and into the U.S.,” says Virginia.

In the 20th century, explorer Vilhjalmur Stefansson spent the latter part of his career at the College, and helped establish the U.S. Army Cold Regions Research and Engineering Laboratory (CRREL) in Hanover. Stefansson’s papers, housed in Rauner Special Collections Library, attract researchers from all over the world. “It is a globally significant academic resource around exploration in the Arctic,” says Virginia.

In addition, the Hood Museum of Art has been developing collections of art and artifacts from indigenous peoples of Greenland, Alaska, and Canada. Faculty and students in biology, environmental studies, earth sciences, anthropology, and engineering are doing critical studies related to the Arctic, from research on the effects of climate change on ecosystems and human cultures to studies of ice cores and low-temperature geochemistry. The Institute of Arctic Studies received a major National Science Foundation IGERT grant in 2008 to create a PhD program in polar environmental change, and in 2014 Virginia was named one of two distinguished lead scholars for the State Department’s Fulbright Arctic Initiative.

Most recently, the College announced the formation of an interdisciplinary academic cluster, Arctic Engineering in a Period of Climate Change—one of 10 such clusters being created across the institution as part of Hanlon’s academic vision for extending Dartmouth’s impact in the world. The cluster, funded through gifts from former Dartmouth trustee Brad Evans ’64 and his family and an anonymous donor, will create three new faculty positions to focus on the societal and environmental impact of increased energy production in Arctic regions.

“Although Dartmouth is a relatively small place, we have a significant reach in the Arctic. People recognize our interest and our history and what we can do,” says Virginia.

The August expedition will be sailing on the scientific research vessel the Akademik Sergey Vavilov, built in Finland to conduct oceanographic soundings and now refitted as a tourist vessel.

“Because it’s an oceanographic vessel and they were doing sonic measurements, it’s very quiet, and it has bow propulsion, so it can get close to the ice and back out easily—much more maneuverable than a classic cruise ship. So we should be able to go to a lot of places that others can’t get to,” says Virginia.

During the last week of the trip, the group will be joined by the former chair of the Inuit Circumpolar Council, Aqqaluk Lynge, who received an honorary degree from Dartmouth in 2012. Virginia credits Lynge with helping establish Dartmouth’s work with Greenland over the past decade—a relationship that has generated significant research opportunities for Dartmouth students and faculty.

“Aqqaluk is a globally significant leader for indigenous peoples who spent many years on the United Nations Permanent Forum on Indigenous Issues,” says Virginia. “It’s going to be powerful to hear him talk about what’s happening there. He’s been the global spokesperson for the resilience of Inuit culture but also for the idea that climate change is really a human rights issue, that people have the right to be cold.”

On the last day of the trip, the travelers will disembark at Kangerlussuaq, Greenland, where much of Dartmouth’s Arctic research has its hub. “We’re going to spend the better part of a day traveling up along the research road that takes us to many of our sites where we do work,” says Virginia. “We’ll stop and talk about specific projects, so they’ll have an opportunity to get a sense of where Dartmouth students go and what we’re doing and what the conditions are like for research there.”

That final day speaks to something intrepid in the character of Dartmouth alumni, Virginia says. “A lot of people at the end of these trips just want to get off the boat and fly home,” says Virigina. “Instead, we’re going to drive up a bumpy road, get in and out, and talk about science. I think that’s so cool.” 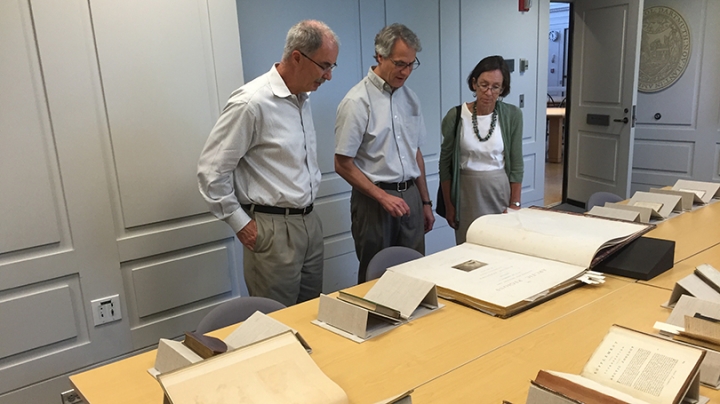