Summer Enrichment at Dartmouth (SEAD) has concluded its 15th summer. 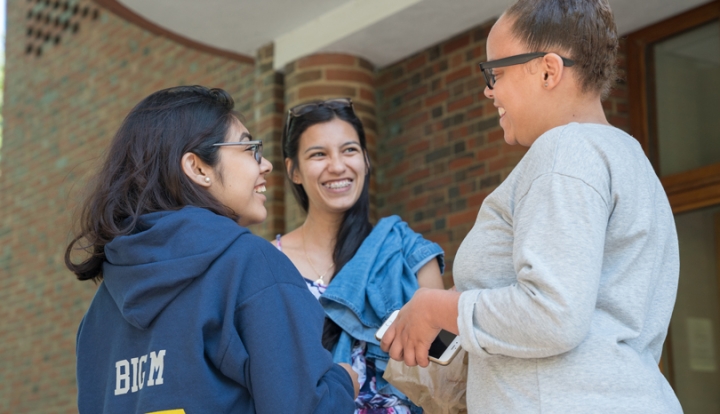 The two-week summer program brings promising low-income high school students from all over the country to campus for small-group seminars on topics including, this summer, the graphic novel, race and ethnicity, electoral politics, and SAT preparation. They also participate in team-building exercises and outdoor trips, and get help coping with obstacles they might be facing in their personal lives.

One morning during the program, at the Nelson A. Rockefeller Center for Public Policy, Senior Lecturer and Policy Fellow Charles Wheelan’88 gives a lecture about the politics of poverty.

Wheelan writes questions on the board for the SEAD scholars to consider. The first: “What’s the role of luck in determining the outcomes of people’s lives?”

“You could luck out and inherit money,” one student says.

“You could win the lottery,” speculates another.

Most of the answers, though, are about bad luck—illness, trauma, addiction, malnutrition, poor education—hardships some of these young people have experienced firsthand.

But SEAD, many say, has been a stroke of good fortune that has changed their lives for the better.

“SEAD is pure luck,” declares Rachel Muir, from Schenectady, N.Y. But SEAD administrators say she deserves credit, too, because her own strength and resilience have been exceptional. Her birth mother struggled with drug abuse, and Muir was placed into foster care at 13. At 15, encouraged by a high school physics teacher, she applied to SEAD.

“They were telling us in interviews about how life-changing the program is and how incredible it is, and I thought, it can’t possibly be that great. Then four days into the program it was like, I know what they mean,” Muir says.

And she won’t have to say goodbye to Dartmouth this week, because Muir is a member of the Class of 2020.

SEAD’s founding director, Jay Davis ’90, predicts great success for her. “She’s going to rock this place and be unbelievable,” he says. “She is probably the most powerful advocate for social justice of any high school student I have ever worked with.”

Muir is the only member of this SEAD cohort who will attend Dartmouth. Others, Davis says, will go to other schools or are making plans for productive gap years before they enter college.

“We’re not trying to recruit them for Dartmouth,” Davis says. “SEAD is about helping high school kids overcome life’s challenges to reach their potential, wherever that takes them.”

It’s also about giving Dartmouth students, staff, and faculty the chance to work in a variety of ways with students who might not otherwise find their way to an Ivy League campus. Davis helped what was then the Tucker Foundation and Dartmouth’s Department of Education launch SEAD in 2001 to “leverage the talents and interests of undergraduates to make a difference in the lives of high school students.”

Dartmouth sophomores serve as mentors, academic coaches, and activity organizers in the summer. Some intern at participating SEAD schools during the fall, winter, and spring terms. In addition, more than 30 faculty and staff volunteer for SEAD each session.

This summer, Davis wraps up 16 years as SEAD’s founding director, giving him more time for other responsibilities, including the direction of the First Year Student Enrichment Program (FYSEP). With SEAD’s move to the Dartmouth Center for Service, Deputy Director Loren Miller is preparing to take the reins. She’s spending this session sitting in on classes, keeping tabs on students, and making sure things run smoothly.

“SEAD provides a comprehensive and deep infusion of support for our high school seniors,” Miller says. The scholars, she notes, are selected not necessarily because they are already excelling in high school, but because they show promise.

“For many of them, life circumstances took precedence over academic success,” Miller says. “The focus of SEAD this summer is to prepare our scholars for the transition to move from high school student to the next adult stage of their life.”

For Jade Morris, from Raymond, N.H., SEAD has been like a second family. “A lot of us are from broken homes, broken communities, so coming here and seeing people who care about us, instantly, and being around people who really do want to spend time with us and talk with us and get to know us—that makes us feel more loved.”

Morris says SEAD has changed her life in other ways, as well, by broadening her horizons. “Coming from a primarily white community, it has opened my eyes. I was never really exposed to any type of racial issues. Here, it was a big eye-opener to actually talk about racism and see how it affects people, because from where I’m from I don’t see it a lot. So it has helped me open my eyes to world issues, not just small-town issues.”

Morris will enter Wheaton College in the fall, and plans to study neuroscience.

She’s one of the scholars who just finished their fourth SEAD summer. Many of the staff have themselves been SEAD students, including AmeriCorps VISTA College Pathways Coordinator MaeAnna Edwards. Student Director Tailour Garbutt ’16 has been working year-round to prepare for the program, and Assistant Student Directors Kasey Crockett ’16, Erika Johnson ’17, Roberto Lopez ’17, and Mark Widerschein ’17 have been working since March to help develop and coordinate summer programming.

Will Corbett ’10, a SEAD lead teacher in this session and Dartmouth’s senior assistant director of admissions, was a high school intern for SEAD in 2004, and eventually attended Dartmouth, becoming SEAD’s student director in 2009-10.

“This is an intensive program that gives Dartmouth students amazing hands-on experience, and it’s the reason many of us decided on careers in education,” Corbett says.