Dartmouth analysts reflect on the nomination of Hillary Clinton. 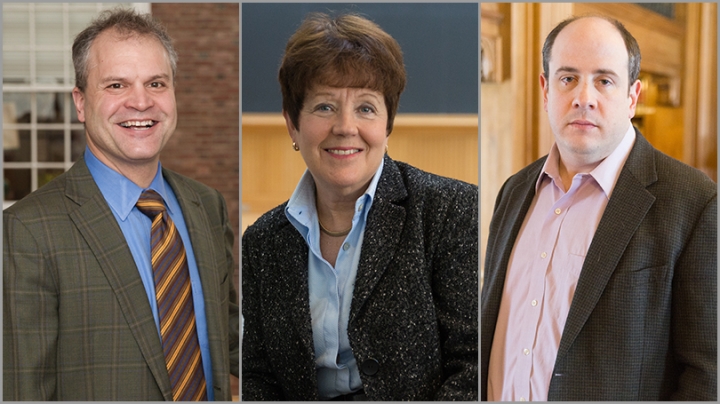 In nominating Hillary Clinton as the first woman to represent a major party in the race for president of the United States, the Democratic Party relied on a time-tested political playbook to try to reel in the progressive supporters of Sen. Bernie Sanders while appealing to centrist and independent voters, many Dartmouth political observers say.

And while GOP candidate Donald Trump’s recent verbal jabs at the Muslim parents of an American soldier killed in Iraq eclipsed most post-convention analysis, the Democrats remained highly disciplined with their message and hit the points they needed to kick off the fall campaign, says Professor Linda Fowler, the Frank J. Reagan Chair in Policy Studies, Emerita.

“I think what was really striking about this convention was the extent to which, after they got through the first day, which was a bit rocky, everybody was on same page, and most everybody except for some Bernie supporters seemed really like they were coming together, and there was a certain kind of joyousness,” Fowler says.

At the start of the convention—following the leak of emails showing a professed bias for Clinton over Sanders in the Democratic Party, the resignation of party chair Debbie Wasserman Schultz, and the suggestion that Russian hackers were monkeying with U.S. politics—the prospect of unity and projecting a clear message seemed remote, Fowler says.

“I think in the long run the party was smart to give the Sanders people an opportunity to vent and not come down too heavily on them when they were protesting and criticizing on that first night,” she says.

Professor Russell Muirhead, the Robert Clements Associate Professor of Democracy and Politics, says giving Sanders a major role in creating the party platform seems to have helped provide an entry point for some of the Vermont senator’s supporters.

“To the extent that the Democratic Party is unified, it is because the party—and Hillary—were willing to empower many of the policies Bernie stood for. Not a small achievement for a losing campaign. Whether this achievement can last will ultimately depend on whether future candidates can inspire and attract the coalition that supported Bernie,” Muirhead says.

And the historic significance of Hillary Clinton’s presidential nomination has been downplayed to some degree in the primaries and at the convention, Fowler notes, in part to reach a broader audience.

“My own judgement was she obviously had to talk about it but she had to use her speech to reach out to a whole lot of people, Bernie supporters, independents, disaffected Republicans, and so forth,” Fowler says. “So I thought the balance was good. I’ve never felt she could run and expect to win by running ‘Vote for me because I’m a woman,’ because female voters don’t operate that way.”

Struggling to find party unity is nothing new for the Democrats, says Fowler, recalling the old saying that when Democrats form a firing squad, they get in a circle. But this year, with the insurgent campaigns of both Trump and Sanders, voters may be seeing something new, Associate Professor of English Jeff Sharlet has observed.

Speaking on a Vermont Public Radio retrospective of the Sanders campaign, Sharlet observed an acceleration of activist political movements on the left and right.

“And so it’s been going on for a while, movements rising and falling very quickly. I think the mistake now is to say those are flashes in the pan, and instead to recognize that we are in an era of political wildfire, that these are the equivalent of wildcat strikes, and we are going to see more and more and more of them,” Sharlet said. “Whether this candidate takes or that candidates takes is missing the point of the rapid cycling of political life that we’ve entered into.”

In a piece for The New York Times Magazine, “Donald Trump, American Preacher,” he even found voters who straddled both the far left and the right at the same time.

“I think back to covering the Trump campaign,” Sharlet said on VPR. “I remember in Youngstown, Ohio, a whole group of Democrats who said we’d vote for Sanders if we thought he had a chance, but maybe we’re going to vote for Trump instead. We don’t like his racism, we don’t really believe he’s going to bring the steel mills back, but we just like to hear it. It’s a rhetoric that’s kind of sorrowful and rueful that is much more common when you go beyond the campaign activists.”

Fowler also sees the Clinton campaign working to stake out the ground as the anti-Trump party, something rare in party politics. This message was repeated in speech after speech in Philadelphia, she says.

“I thought the president made an incredibly effective frame for it, which is that our democracy is about individual citizens taking responsibility for fixing problems. We don’t want a ruler and we don’t need one. Hillary picked up on that as well in her speech,” Fowler says.

“This is very consistent with the framers’ vision of the American political system. They were extremely worried about demagogues and about mass movements, so in many ways they had the framers on their side in framing this debate,” she says.

The messy work of finding political unity is part of the process, Muirhead says.

“For the moment, Democratic Party unity reflects a real and substantial compromise between the supporters of Clinton and the supporters of Sanders,” Muirhead says. “This is what good partisans should do—compromise with each other for the sake of winning power constitutionally. That the Democratic Party has done it will be a powerful resource for the Clinton campaign in the general election.”

Sharlet sees a different trend that will likely continue into the general election campaign.

“I think Sanders is looking very seriously, as many people are, at this incredible problem of lesser-of-two-evilism, and we’ve been crying wolf for decades saying this election is the one that matters, but maybe this one is,” Sharlet says.