“It has been an honor to represent and advise Dartmouth,” says Donin. 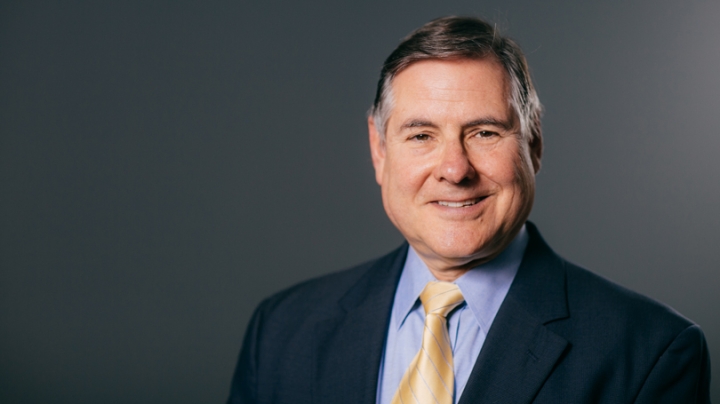 Robert Donin has worked in the College’s Office of the General Counsel since 2000. (Photo by Robert Gill)
8/12/2016
Body

Robert Donin, Dartmouth’s general counsel for the past 16 years, will retire at the end of the 2016-17 school year, the College announced today.

Donin has overseen the Office of the General Counsel and been a member of the College’s senior management team, advising the president, the board of trustees, and other officers on a broad range of legal and strategic matters. He has directed the day-to-day operations of the counsel’s office, supervising three staff attorneys and three support staff, as well as overseeing the Office of Visa and Immigration Services and selecting and managing outside counsel.

“Bob is among the most widely respected officers across our institution. In addition to his serving as a trusted adviser to me, our entire campus community has benefited from his keen judgment and measured approach to matters of the law,” says President Phil Hanlon ’77. “I cannot thank him enough for his deep commitment to the College and our mission, and for the wise counsel he’s provided during his time with us.”

As general counsel, Donin played a key role in the board of trustees’ 2007 governance study, the revision of Dartmouth’s intellectual property policy, the creation of the College’s regulatory compliance program, and the establishment of the College’s program for the protection of minors, among other initiatives.

Donin came to Dartmouth in 2000 from Harvard University, where he had been an attorney in the Office of the General Counsel since 1984, rising to the position of deputy general counsel in 1997.

“If one has to practice law for a living, I can’t think of a better way to do it than representing an educational institution, or a better place to do it than the vibrant Hanover community,” Donin wrote in a note to colleagues. “It has been an honor to represent and advise Dartmouth—and Harvard, too—and a privilege to work alongside so many talented and dedicated colleagues.”

Donin says he and his wife, Mary Donin, are looking forward to traveling and visiting their three children and their new granddaughter.

“While the nature of legal problems confronting higher education has evolved, our mission has not,” says Donin. “It is to help create an environment in which members of an academic community can teach, learn, and create new knowledge.”

Before Harvard, Donin was an associate and then partner at the firm Verner, Liipfert, Bernhard & McPherson in Washington, D.C. He began practicing law as a trial attorney with the U.S. Department of Transportation in Washington, where he spent three years, and was a recipient of the General Counsel’s Special Achievement Award and the Secretary’s Award.

Donin has held professional memberships in the National Association of College and University Attorneys, where he was a member of the board of directors from 2012 to 2015, and the New Hampshire Forum on Higher Education. Locally, Donin served from 2006 to 2014 on the board of directors at the continuing-care retirement community Kendal at Hanover.

The College will engage a search firm in the fall and conduct a national search for the next general counsel.