The business and entrepreneurship institute is part of an Obama administration initiative. 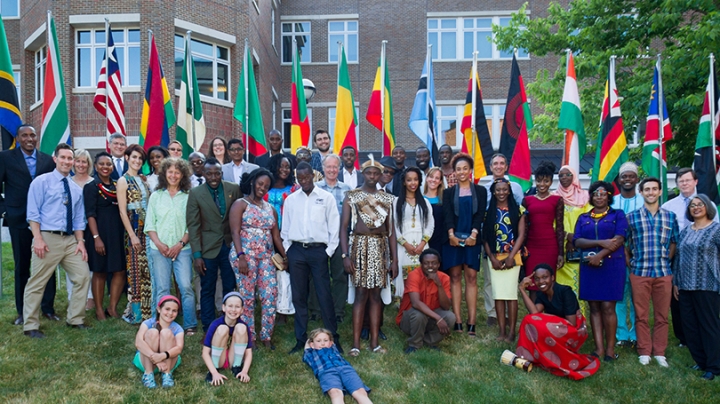 The 25 young African leaders who were part of the 2016 Mandela Washington Fellows at Dartmouth, plus faculty and staff associated with the program, gather at the welcoming ceremony for the six-week institute. (Photo by Lars Blackmore)
8/02/2016
Body

Mandela Mwanza, a Malawian hip-hop artist known as Third Eye, and filmmaker and producer Girum Assefa Akriso of Ethiopia found a common bond in their struggle to promote African artistic voices and to send a message of empowerment to the youth of their nations. Together they are producing a music video for Third Eye’s new song, “Obama Found Mandela."

They made that connection in Hanover, N.H.

Mwanza and Akriso are among 25 young African leaders from 17 countries who came to Dartmouth this summer as Mandela Washington Fellows. This is the third year the College has run the six-week academic and leadership institute in business and entrepreneurship, which is supported by President Barack Obama's Young African Leadership Initiative (YALI).

The Dartmouth YALI program is overseen by the John Sloan Dickey Center for International Understanding, working with many campus partners and closely with the Department of State’s Bureau of Education and Cultural Affairs. The academic sessions are led by Thayer School of Engineering Professor Peter Robbie and Dartmouth alumni entrepreneur Richard Nadworny ’82 using a combination of traditional lectures, workshops, group-based project assignments, and community engagement. Professor Lorie Loeb of the Computer Science Department and director of the Digital Arts, Leadership, & Innovation (DALI) Lab led culminating sessions on making “the pitch.” 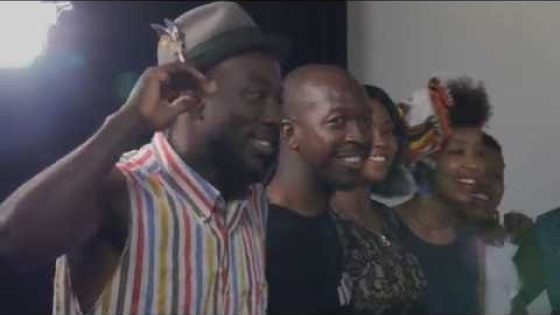 Daniel Benjamin, the Norman E. McCulloch Jr. director of the Dickey Center, says that in three years of hosting the YALI program, the Dartmouth community has been enormously enriched.

“The fellows are so extraordinarily talented and we're doing better and better at integrating them into the larger community,” he says. “The contacts that we're making and the networks that we're building will allow us to send students out and faculty out to these countries and to plug into their networks. I think it is a program that will repay itself many times over.”

Ifeoluwa Oluwole of Nigeria, a digital strategist for Nigeria’s largest marketing agency, says the YALI participants have also been tremendously enriched in their time at Dartmouth.

“I’ve been surprised and amazed at the kind of solutions that we have brought out of some of the group assignments and themes in our classes with Professor Nadworny and Professor Robbie,” says Oluwole, who is working to form her own agency to help men and women who are struggling to establish their own businesses in Nigeria.

“And the leadership sessions at the Rockefeller Center, for me, have been invaluable because they try to balance the academic aspects with real life—the real world. That is something that I'm constantly trying to balance and that we as young leaders are trying to balance so that we can make a real change in our countries when we get back,” said Oluwole during the community mixer before a “Cultural Connections” cafe where fellows offered informal talks about their home countries.

Olivier Madiba, a writer and founder of Kiro’o Games, the first video game development studio in Central Africa, spoke about his home country of Cameroon at the Cultural Connections gathering. He hopes to help create a project incubator “adopted to African realities” that will encourage an entrepreneurial mindset in young people. “We are not trying to make the next Steve Jobs, but to make the conditions for making a Steve Jobs in the next generation.”

After the session, Madiba explained his thinking about Africa as a blank sheet that the U.S. and Western nations can look to for “the next step” of economic and cultural development, adding that his generation of leaders must lay the groundwork.

“We really want to create the conditions where great minds can work without thinking about the problems of survival—of feeding themselves. We want to create something where everyone will have a share,” Madiba said. “I call it the theory of converging interests. I try to build it with the other African leaders day after day.”

Participating in the YALI program has furthered this work, he says. “It has definitely been one of the checkpoints of my life. The man that I was before and the one that I will be when I get back to Cameroon is really not the same. So thanks to my American friends and we will hopefully work together in the next phase.”

Girum Akriso, the filmmaker on the hip-hop music video, is developing a documentary TV show that profiles the struggles and successes of African artists and cultural leaders. He says when he heard about the Mandela Washington Fellows program, he knew it would help him in his own struggle to make a difference.

“Before I got to this program, I used to think it was me against Africa’s problems. But I learned it was not just me, that there were people out there doing what they have to do, fighting the good fight to bring about the change that we want to see,” he says.

The YALI fellows traveled to Washington, D.C., at the end of July and will join fellows from other colleges and universities, 1,000 African leaders in all, for a town hall meeting with President Obama on Wednesday. Mandela Mwanza, the Hip Hop artist known as Third Eye, is looking forward to meeting the president, who gave permission for his words at the memorial of Nelson Mandela to be used in Mwanza’s song, which also praises the YALI experience.

“Obama’s hosting the summit on the third day. He calls out a lot of people. He's in tune, he's in touch. One thing I like about him, he's not too above the situation,” Mwanza said.

The YALI Business & Entrepreneurship Institute at Dartmouth is a collaboration of the following departments: The Dickey Center for International Understanding, the Nelson A. Rockefeller Center for Public Policy and the Social Sciences, the Dartmouth Center for Service, Thayer School of Engineering, the Outdoor Programs Office, the Computer Science Department and the Digital Arts, Leadership, & Innovation (DALI) Lab, and the Dartmouth Entrepreneurial Network (DEN). 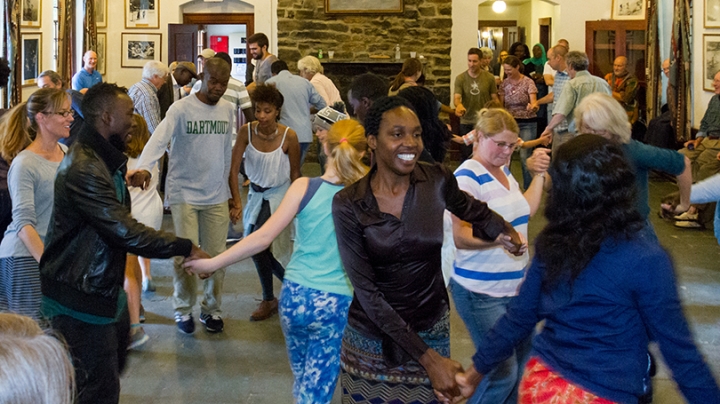 The Mandela Washington Fellows and members of the Upper Valley community who hosted YALI participants during the “American Homestay Weekend” join in a contra dance and potluck dinner at the Dartmouth Outing Club House on July 10. (Photo by Lars Blackmore)
Written by
Bill Platt
Share this
FacebookTwitterEmail
In the News