Geisel Welcomes the Class of 2020

The 92 new students represent a small percentage of the nearly 6,700 applicants. 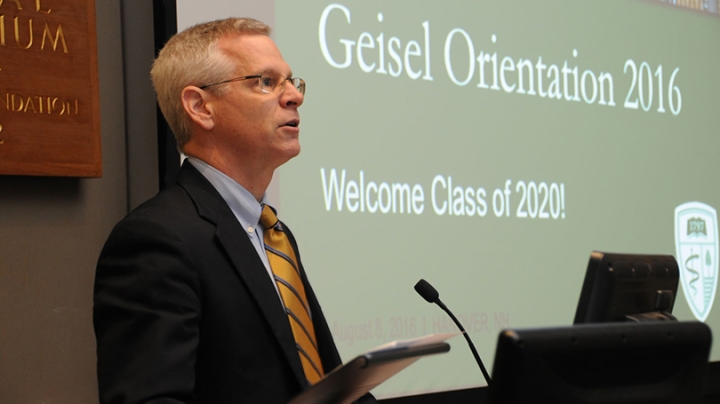 Read the full story by Derik Hertel, published by the Geisel School of Medicine.

The Geisel School of Medicine welcomed its 220th class to Hanover with advice and greetings from Duane Compton, interim dean of the medical school, Provost Carolyn Dever, and others at the Year One Orientation, which began on Aug. 8.

“It’s always exciting to start a new academic year and welcome a new class of students to Geisel,” said Compton. “This class is impressive for its academic achievements and experiences. Our faculty are looking forward to helping them develop into outstanding physicians and scientists.”

The 92 new students, including 90 MD and two MD/PhD students, represent a small percentage of the nearly 6,700 who applied to Geisel via the American Medical College Application Service. The new class hails from 24 states and 53 undergraduate institutions, with representatives of every Ivy League school, including 14 Dartmouth alumni.

Many in the class already hold advanced degrees, including one PhD in psychology. About 40 percent of the class members have already been listed as an author on a scientific paper in journals such as the New England Journal of Medicine, Science, PNAS, and PloS One. One-third of the class has also participated in scientific or healthcare experiences in more than 25 countries outside the United States. And many students have professional experiences, including working or interning at the Centers for Disease Control, the World Health Organization, the United Nations Educational, Scientific and Cultural Organization (UNESCO), and the White House Office of Science and Technology.

While classes don’t officially start until next week, the first-year medical students will spend this week in a variety of orientation activities, including team-building exercises and opportunities to get acquainted with their new classmates, as well as with Dartmouth and the local community.