“This is a chance for people to really see what they are made of, ” says organizer Jalen Benson ’17. 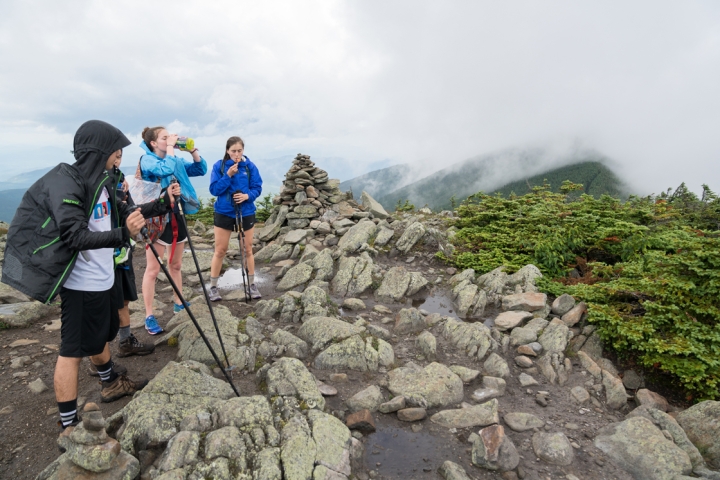 See photos of this year’s Dartmouth 50.

Neither hail nor heat nor blistered feet kept more than 30 hikers from testing their mettle last weekend on the 53.6-mile odyssey that has become a rite of passage for generations of Dartmouth students. The 50, sponsored two or three times a year by the Dartmouth Outing Club, takes plenty of grit and plenty of gorp as teams of four trek from Robinson Hall to the treeless summit of Mt. Moosilauke. Think of it as two nonstop marathons over four mountains on rugged terrain through unpredictable weather.

This summer’s hike was organized by three student directors, Ursula Jongebloed ’18, Francesca Governali ’18, and Jalen Benson ’17. The 50 is “quintessentially Dartmouth,” says Balen. “We are in beautiful New Hampshire with all the mountains and we have such a strong community, so this is a chance for people to really see what they are made of. And it also gives those who aren’t into hiking a chance to help their friends along the way.”

At support stations about every 8 miles along the route, 71 volunteers supplied encouragement, food, drinks, massages, and, if needed, medical attention. It was nearly 90 degrees at the start, Benson says, so at his support station he passed out popsicles. Each station featured a theme. For example, “The Olympics” was marked with flags from different countries hanging from trees, and at “Jacob’s Farm,” some supporters dressed up as chickens.

Benson says he’s seen hikers show up at various mileposts looking surprisingly good—“they’ve just hiked all night in two marathons, and they are happy and joyous.”

And some, he says, look not so good.

“I’ve also seen friends with glazed looks on their faces, about to pass out. Some people can go out the next night, and others are out of commission for a week,” he says.

But no matter how daunting the prospect, and however exhausted hikers are at the end, it is clearly on a lot of bucket lists. Many more students apply than can be accommodated by the support network, so they are chosen by lottery.

“At what other college can you walk on the Appalachian Trail through your own campus, all the way to a beautiful mountain peak? I think this is something no one else has,” Benson says. Undeterred by stormy weather, 31 out of the 32 hikers who signed up for The 50 went the distance this summer.