Artists have used the Hanover sojourn to work out the kinks in some 150 theatrical works since 1991. 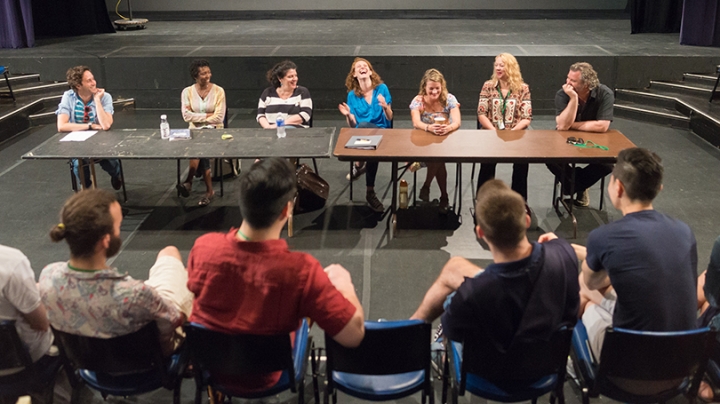 In the summer of 1990, at Hotchkiss School in Lakeville, Conn., the New York Theatre Workshop held its first summer camp—in which it brought theater artists to a bucolic location to workshop new theater work. The following summer, it moved the program to Dartmouth’s Department of Theater.

Here it has stayed, and the 25 summers since have been fruitful for both the workshop's members and the Dartmouth theater department, as artists have used the sojourn to work out the kinks in some 150 theatrical works and present them to an audience.

One of the country's leading developmental theaters—helping artists write, stage and refine new works for the stage—the workshop is in residence at Dartmouth for three weeks each summer. The residency involves six theatrical works-in-progress, being worked on by visiting writers, directors, composers, dramaturges, performers, and others—artists who, year round, are helping to shape the theater of today. The workshop’s Dartmouth residency is important not only to the artists and Dartmouth theater students but to theater lovers from across and beyond the campus who delight in watching nascent works that might later go on to broader success. The works-in-progress are presented without costumes, props or scenery and with minimal staging, and may change substantially after the workshop.

The plays workshopped at Dartmouth include the groundbreaking Broadway hit Rent (workshopped in 1994), which not only made theater history but also was a great source of revenue for the workshop through its 12-year run on Broadway; the now-legendary drag cabaret act of Kiki and Herb (workshopped in 1998); The Laramie Project (workshopped in 1999), a landmark work of documentary theater drawn from hundreds of interviews, journals and news stories concerning the 1998 murder of gay University of Wyoming student Matthew Shepard; Elevator Repair Service’s The Sound and the Fury (workshopped in 2007, with support from Dartmouth); actor Denis O’Hare’s (Milk, True Blood) one-man An Iliad (workshopped in 2009), a tour-de-force adaptation of The Iliad reflecting on our own war-ravaged times; and the current Off-Broadway hit “folk opera” Hadestown (workshopped in 2014), written by Vermont-raised singer-songwriter Anaïs Mitchell.

Other influential theater artists who have been a part of the Dartmouth residency include Andre Gregory (My Dinner with Andre, Vanya on 42nd Street); playwright Charles Mee (Big Love, SITI Company); playwright Tony Kushner (Angels in America); actors Larry Pine (Vanya on 42nd Street), Colman Domingo (The Scottsboro Boys) and Ruben Santiago-Hudson (ABC’s Castle); performer/writers Thaddeus Phillips (Red-Eye to Havre de Grace) and Taylor Mac (A 24-Decade History of Popular Music); directors Michael Greif and Lisa Peterson, who have directed many Dartmouth projects including, respectively, Rent and An Iliad, and have come many times with NYTW projects; and director Ed Sylvanus Iskandar, an American theater visionary whose most recent coup was an all-male, music-enhanced version of The Taming of the Shrew for the Oregon Shakespeare Festival. Iskandar has previously workshopped plays at Dartmouth—Bacha Bazi (Boy Play) in 2013 and Stuck Elevator in 2015—and returns this summer as director of Her Portmanteau by award-winning young playwright Mfoniso Udofia, about three generations of Nigerian-American women confronting past family pain and current culture clashes, on Aug. 6 at 7:30 pm.

Meanwhile, the theater department has built an entire summer course around the type of work going on in the residency. Its Theater 65 “New Plays in Development” course takes a group of theater students through three-phase experiential learning, first as participants in VoxFest, in which Dartmouth alumni theater professionals bring developing works to campus for a week of workshopping and free presentations; then the Eleanor Frost & Ruth and Loring Dodd Student Play Festival, which ran July 31 through Aug. 2 and offered staged readings of two prize-winning plays by Dartmouth undergraduates and a full production of another; and lastly the residency, in which students participate as dramaturges, assistant directors, and sometimes performers, as well as learning and practicing a rigorous method for critiquing developing work.

This summer’s projects include one with a Rent connection: Frequently Unanswered Questions, to be presented on Saturday, Aug. 13, at 4 p.m. It is a solo autobiographical show written and performed by Daphne Rubin-Vega, who originated the role of Mimi Marquez, the HIV-positive junkie and exotic dancer whose love story with a failed rock musician is one of Rent’s main themes. Rubin-Vega went on after Rent to originate roles including Conchita in the Pulitzer Prize-winning show Anna in the Tropics and Lucy in Jack Goes Boating at the Public Theater; and to star in the Broadway revivals of The Rocky Horror Picture Show, Les Miserables and A Streetcar Named Desire and play leads in numerous films opposite actors including Kevin Bacon, Matt Dillon, Robert De Niro and Phillip Seymour Hoffman. A recording artist prior to being cast in Rent, she has released several albums, including one of original songs.

Other shows and artists the workshop is bringing to Dartmouth this summer:

• Here Are Our Monsters, by emerging playwright A. Rey Pamatmat, directed by May Adrales, about love, aspirations and anxiety in the wake of the 2015 Supreme Court ruling on same-sex marriage (Aug. 20, 7:30 p.m.)