The alumna and her fellow fallen runner are cited as epitomes of the Olympic spirit. 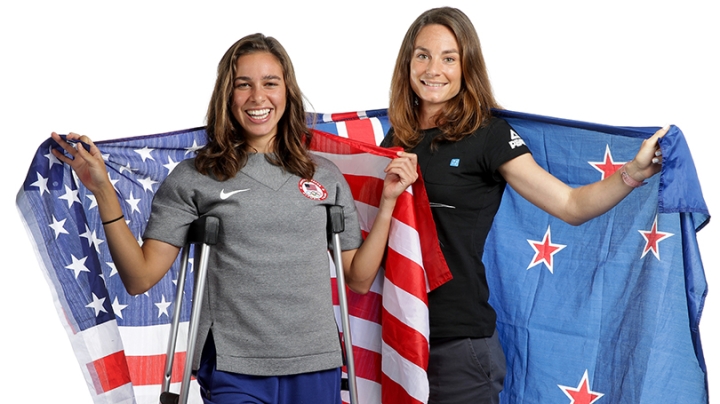 Abbey D’Agostino ’14, left, and New Zealand runner Nikki Hamblin have been recognized by the International Olympic Committee as “true champions of sportsmanship.”
8/22/2016
Body

Abbey D’Agostino ’14 and fellow Olympic runner Nikki Hamblin of New Zealand, who helped each other complete the 5000-meter qualifying race after they collided and fell hard, have been recognized by the International Olympic Committee (IOC) as “true champions of sportsmanship.”

“I am genuinely touched to be given a Fair Play Award. It's affirming to see that the value of sportsmanship is universally just as (if not, more) revered as performance accolades—I am humbled and grateful to be a part of that legacy,” D’Agostino said Monday from Boston after returning from Rio with her coach, Mark Coogan.

On Saturday, before the closing ceremony of the 2016 Rio Olympic Games, the International Fair Play Committee, with support from the IOC, presented D’Agostino and Hamblin with Fair Play awards at the Olympic Club in Rio de Janeiro for “two separate acts of selflessness and exemplary sportsmanship.”

“Nobody has epitomized these values more at the Olympic Games Rio 2016 than runners Abbey D’Agostino (USA) and Nikki Hamblin (NZL),” the IOC wrote on the official Olympic website.

D’Agostino, the most decorated individual athlete in Ivy League history, helped Hamblin up and was urging her to finish the race when the Dartmouth grad’s leg buckled again and she went down a second time. Hamblin stopped to help D’Agostino, who completed the last mile despite a torn ACL, MCL, and meniscus.

Coogan, who was also D’Agostino’s coach at Dartmouth, is working with her to investigate options for surgery to repair the injuries that forced her out of the final race, according to information released by Total Sports Management Inc.