Researchers use the machine to answer questions about the organization and functioning of the brain. 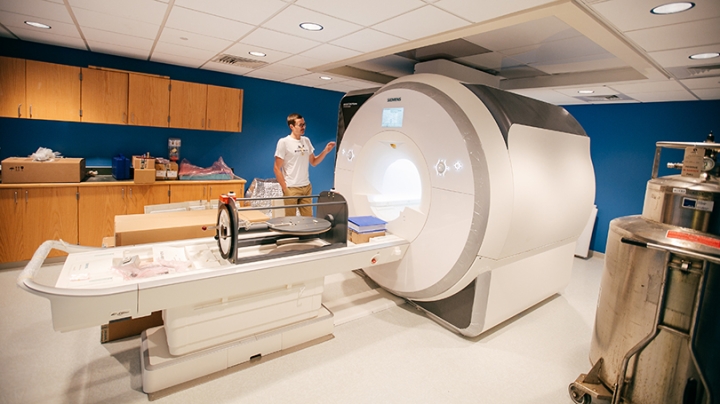 Researchers are welcoming the arrival of a new MRI scanner, the latest in a series of scanners dating back to 1999, when Dartmouth became the first U.S. college or university to own and operate a magnetic resonance imaging scanner housed in an academic department—not in a hospital, medical school, or other medical setting—to be used strictly for research purposes.

The new scanner, weighing more than 26,000 pounds, was lowered into its bay beneath Moore Hall last month, in the home of the Department of Psychological and Brain Sciences (PBS).

“This is a big deal,” says James Haxby, the Evans Family Distinguished Professor and director of both the Center for Cognitive Neuroscience and the Brain Imaging Center. “We are extremely excited about getting this new scanner. It will be in use seven days a week, from early morning to late at night.”

Over the years, the Brain Imaging Center’s MRI scanners have been used for researching questions about the organization of the brain, the concept of free will, the role of the amygdala in learning and anxiety disorders, and how the brain recognizes music, visual imagery, and its relation to memory.

“Having an in-house MRI scanner has allowed us speed and flexibility in asking questions about how the mind is realized in the brain’s neural activity,” says Professor of Psychological and Brain Sciences Peter Tse. “This has probably made my lab twice as productive as it would have otherwise been. It also affords undergraduates opportunities to get involved in cutting-edge research right here on campus.”

An MRI uses a strong magnetic field and radio waves to create detailed images of the brain. It looks at changes in blood flow in the brain to map areas of neural activity, providing potential insight into how the brain works.

“It is a tool we can use to decode brain activity and help us understand circuits for perception and circuits for decision-making,” says Haxby. “We can get much better answers, much clearer, more penetrating answers with better equipment. We have a very popular course on MRI imaging for undergraduates and several senior theses every year are based on assignments undergraduate have run on the scanner.”

The new scanner will serve as the principal research instrument for more than 15 faculty investigators, their graduate students and postdocs, and undergraduates.