State of the Nation

CNN anchor Jake Tapper ’91 takes a break from covering the news to talk about the method of the media amid the madness of the election. 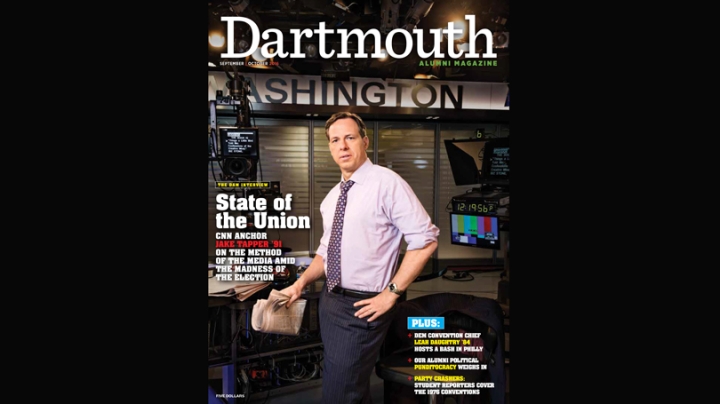 Inside is a political junkie’s collection of campaign memorabilia, including a Florida butterfly ballot from the contested 2000 presidential election and prints, posters and photographs of losing presidential candidates from Henry Clay to Chris Christie. A framed letter from Gary Hart thanks 15-year-old Jacob Tapper for handing him a political caricature at a campaign appearance, offers a signed photograph and courteously declines a request for an interview for the high school newspaper. “I did finally get the interview,” Tapper notes. “It just took a while.” He grilled Hart three decades later on his weekday show The Lead with Jake Tapper.

Persistence is a Tapper trademark. Headlines in June saluted him for following up 23 times when then-presumptive GOP presidential nominee Donald Trump tried to duck a question about whether the candidate’s criticism of a California federal judge was racist.

As CNN’s chief Washington, D.C., correspondent, anchor of State of the Union and The Lead and the moderator of three GOP presidential debates, Tapper has repeatedly made news this election cycle with his tough-minded interviews.

Tapper’s route to journalism was a circuitous one. His first ambition was to be a political cartoonist—a skill he honed with his long-running Roll Call strip “Capitol Hell” and now exhibits in the “State of the Cartoonion” segment of his Sunday morning public-affairs show.

After graduating from Dartmouth, he worked as a staffer for Rep. Marjorie Margolies-Mezvinsky (D-Pa.) and later in D.C. public relations. The late David Carr, a former Washington City Paper editor who became The New York Times’ storied media columnist, was an important mentor, persuading Tapper to forgo better-paying PR jobs for the more amorphous rewards of alternative-weekly journalism.

After a stint at Salon.com, Tapper was able to make the leap to ABC News, where, as a White House correspondent, he won three straight Merriman Smith Memorial awards for broadcast journalism, and then to CNN, where he has continued to amass prizes for his coverage. He’s authored three nonfiction books—Body Slam: The Jesse Ventura Story (1999); Down and Dirty: The Plot to Steal the Presidency (2001), about the aftermath of the 2000 election; and The Outpost: An Untold Story of American Valor (2012). He also serves as a contributing editor to DAM.