“We think we should go for it,” says environmental studies professor Andrew Friedland. 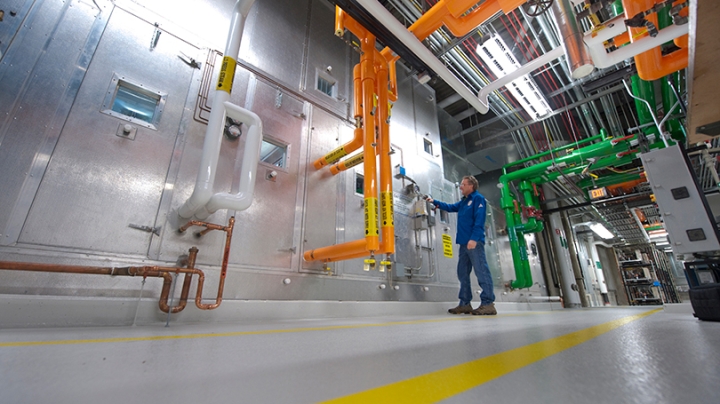 One of the newest structures on campus, the Class of 1978 Life Sciences Center is rated as a LEED platinum building, the highest certification in the benchmarking system designating resource-efficient “green” buildings. (Photo by John Sherman)
8/08/2016
Body

Over the last five years, Dartmouth has added 300,000 square feet of building space while reducing campus consumption of fuel oil by close to one third.

Now a multidisciplinary group of students, administrators, and faculty are meeting as a task force to build on that progress. Topping the agenda, says co-chair Andrew Friedland, the Richard and Jane Pearl Professor in Environmental Studies: heating and cooling the campus. Also under review is the management of food, water, transportation, and waste.

Friedland says converting the College’s antiquated steam plant to hot water and replacing highly polluting No. 6 fuel oil could lower costs and reduce reliance on fossil fuel. One option being considered is switching to wood chips, but in Friedland’s view burning wood products is not an ideal long-term solution. “We are also looking into solar arrays,” he says.

The goal, Friedland says, is to lower energy costs while reducing Dartmouth’s emissions of carbon dioxide. The status quo, in his view, is becoming untenable, and the task force is convening at an opportune moment to come up with more economical and environmentally sound ways to meet the College’s energy needs.

He notes that College trustees have also placed a high priority on energy conservation.

“We have a really great opportunity—if the administration makes the choice to do it—to save money over the long run and be more sustainable,” says Friedland.

The reduction in energy use was accomplished in part through an energy conservation program that has installed more efficient equipment, lighting, and recommissioned heating and ventilating systems. Since 2011, new and renovated spaces were about twice as efficient as the older spaces they replaced.

The group plans to meet seven or eight times between now and March, when they will present their recommendations to President Phil Hanlon ’77. Announcing the task force last April 22, on Earth Day, President Hanlon noted that the College had already taken significant steps toward goals set in 2008 by former President James Wright, who called for a 20 percent reduction in greenhouse gas emissions by 2015. The College met that deadline and exceeded the mark, with a nearly 22 percent drop.

While it will take time to build consensus about the best way to shrink the College’s carbon footprint—and to fund and implement those steps—Friedland sees strong momentum toward a more sustainable future on campus.

Friedland also sees opportunities to integrate the work of the task force with academic courses and departments.

“We want to see the intellectual energy of students and faculty members and staff all interwoven in this process, furthering the facilities mission of delivering comfort, safety, convenience, and low cost in a sustainable way.”

The group members, who represent many areas of expertise, are on a tight schedule, with less than a year to propose what they hope will be meaningful and lasting changes. Friedland is confident they will meet the deadline with recommendations that will prove substantive and achievable, particularly because there is already a large body of existing work done by staff and previous committees.

“We are excited that we are going to come up with some really good things in a relatively short period of time, and hand that plan over to the administration and say, ‘We think we should go for it,’ ” he says.