What Is College Writing—and How Should It Be Taught? 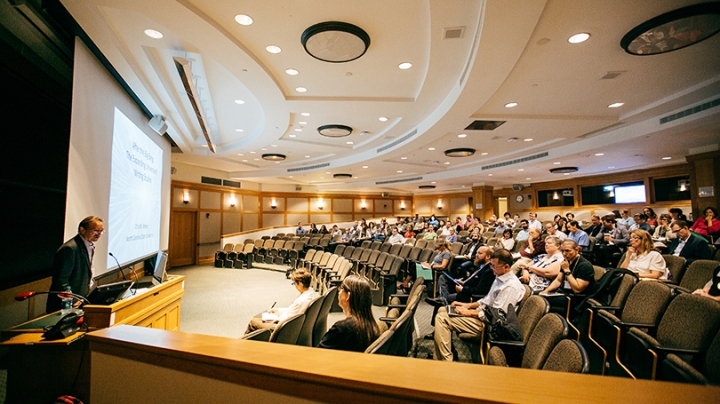 Chris Anson, director of the Campus Writing and Speaking Program at North Carolina State University, delivers the opening plenary lecture at the 50th Anniversary Dartmouth Institute and Conference co-sponsored by the Leslie Center for the Humanities and the Institute for Writing and Rhetoric. (Photo by Robert Gill)
8/24/2016
Body

What do we mean by “college writing” and how do we teach it effectively? What is the state of writing research in higher education? Scholars have been hashing out those questions for decades. On Aug. 20, 1966, more than 50 researchers from the U.S., the U.K., and Canada converged in Hanover for a conference that came to be known in academic circles as “The Dartmouth Seminar.”

At that time, college writing courses were in flux, and there were worries about a decline in literacy. The gathering at Dartmouth was seen as a milestone in the emerging field of composition studies. One noted scholar, Joseph Harris, said it triggered a “Copernican shift” in the way writing was studied and taught in higher education.

This month, Dartmouth hosted the 50th Anniversary Dartmouth Institute and Conference, co-sponsored by the Leslie Center for the Humanities and the Institute for Writing and Rhetoric with support from the Dean of the Faculty, the Office of the Provost, and the Neukom Institute. “ ‘College Writing’: From the Dartmouth Seminar to Tomorrow” brought together scholars from many disciplines to exchange empirical research methods and results about how writing happens and what teachers and researchers can do to support it.

“We wanted the conference to encourage experimentation,” said organizer Christiane Donahue, director of the Institute for Writing and Rhetoric, “to broaden and deepen understanding about a tapestry of writing research questions and methodologies.”

And not only in English class. As writing instruction has spread across the curriculum, composition research has also become multidisciplinary, drawing from such fields as neuroscience, sociology, geography, anthropology, psychology, linguistics, political science, ethnography, and history.

Expanding study beyond departments of English has been a good thing, said Chris Anson, director of the Campus Writing and Speaking Program at North Carolina State University. In his plenary speech, he urged highly specialized scholars to seek out perspectives unlike their own and exchange ideas outside their academic comfort zones. Anson also challenged his peers to “get all of our research that looks toward pedagogy into the minds and thoughtful reflections and actions of teachers. What would that require and what would it do?”

More than 75 presenters explored, for example, quantitative ways to identify writing patterns and measure whether teaching methods are effective. They shared research about multilingual speakers and writers. Peer review—students evaluating the writing of other students—was another popular topic. Josh Compton, assistant professor of speech, talked about how attitudes can be resistant to influence, much as bodies can be inoculated against disease. Monika Otter, an associate professor of English and comparative literature, discussed the historical and modern use of translation for increasing students’ verbal mastery.

“Writing has now been broadly defined by some scholars as including visual as well as verbal communication. Associate Professor of Film and Media Studies Mark Williams explained how his Media Ecology Project at Dartmouth “engages new access to rare moving image archives for original primary research that simultaneously adds value to the participating archives—a virtuous cycle of new scholarship and knowledge production.”

“What strikes me,” said Donahue, “is that the groundbreaking questions posed at that important 1966 conference are still being asked today. What is a writer? What is a student writer? What are the things that matter in writing classrooms—that really stay with students, and change the way they think? What is the relationship between thinking and writing, between speech and writing, between language and writing?” The questions may recur, she says, but the answers keep changing, in part because they are now coming from scientists and social scientists, as well as English professors.

For the concluding session, participants jointly wrote a Google document summarizing what they took away from the conference. One writer commended the Institute for creating a “methodology of generosity—an openness to many perspectives.” Donahue says the papers presented during the weeklong institute and the three-day conference will be collected in a volume that she hopes will continue the conversation about writing research in higher education.