Why Get a Liberal Education?

Three Dartmouth medical professors have one answer: It is the “life and breath of medicine.” 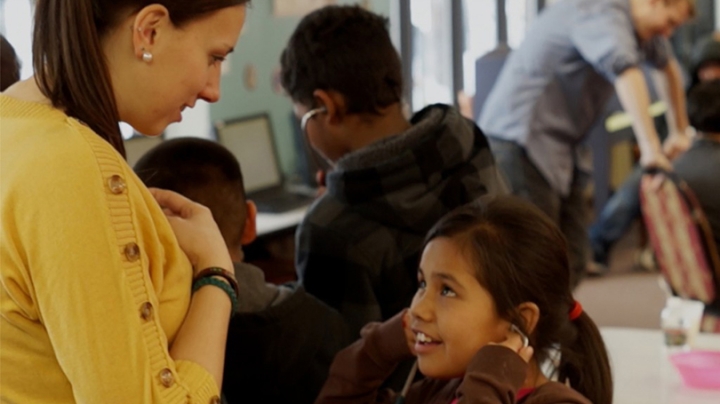 A medical student and child at Minnesota Indian Health during the student’s alternative spring break experience. (Photo courtesy of the Geisel School of Medicine)
8/17/2016
Body

The following opinion piece by Dartmouth’s Leslie Henderson, Glenda Shoop, and Lisa V. Adams was originally published by The Conversation.

Hospital rankings were released Aug. 2 by U.S. News & World Report. Of the top 20, almost every single hospital is affiliated with a medical school. These big academic medical centers treat a large share of our nation’s sickest patients.

Yet academic medical centers across the nation are reeling from economic pressures and questioning one of their core tenets: that institutions of higher education have medical schools because they bring revenue and prestige.

That was true for decades. In recent years, however, this assumption has been challenged. Academic medical centers have faced a financial double whammy: shrinking “clinical margins” from changes imposed by the Affordable Care Act and a generally flat research budget from federal granting agencies such as the National Institutes of Health.

In response, medical schools and their teaching hospitals, including Berkeley, Harvard, Michigan, Southern Illinois, Vanderbilt, Wayne State, Yeshiva and our home institution, Dartmouth, have turned to significant restructuring to rein in budgets. Some have done so to stave off the threat of closure.

At the same time, as the cost of an undergraduate education skyrockets, the validity of a broad-based liberal education has also come increasingly under fire. People question the value of a liberal arts education in a digital economy compared to the hard, technical skills from the STEM fields in making graduates marketable in today’s world.

The confluence of these two shifts is particularly marked in smaller medical centers like ours at Dartmouth. This raises the question: Does a medical school belong with a liberal arts school? Or are we (as we are sometimes called) an overly expensive trade school that produces “body mechanics” and outside the school’s dedicated mission to liberal education?

As medical school faculty members and administrators, we sought to explore this question.

A Need to Know How to Communicate

Many may be surprised to learn that liberal education is deeply ingrained in medical school curricula. Yes, medical students learn anatomy, physiology, biochemistry and neuroscience, but they also have required courses in ethics, leadership, policy, economics, sociology and psychology.

To succeed at their trade, doctors not only need to have a sophisticated knowledge of biology, they also must master the complex clinical micro—and macro-systems in which their patients live and they work.

Thus, today’s medical curriculum teaches new doctors about culture and communication. It is no longer good enough—and probably never was—for a doctor to simply know the appropriate medication to prescribe or diagnostic test to order.

Physicians must also fully understand social constructs such as class, gender and race, explicit and implicit, that mold both how they make medical decisions and how, in turn, patients receive their care. We all know the most science-smart physicians will fail their patients if they aren’t effective communicators with a sense of cultural humility.

On the world stage, understanding culture, politics and economics is crucial to health challenges that range from pandemics to bioterrorism. As the global health expert Laurie Garrett noted recently, culture isn’t just important in these efforts; it’s the whole ballgame.

Medical schools are also often at the forefront in innovations in pedagogy. For example, “experiential learning” as a concept has gained traction in recent years across academic institutions. Yet medical schools have been leading such efforts for centuries where all students spend time “on the wards” learning how to take care of patients.

Working Beyond the Wards

Beyond the wards, medical students also engage in off-campus activities where they learn the realities of providing clinical care within highly diverse human communities. At Dartmouth, we incorporate ethics, economics, global politics, anthropology and sociology into our medical curriculum. We also track and evaluate the impact of these areas of study on student performance.

From working with underserved populations in tribal nations and inner cities in the U.S., to participation with collaborative HIV/tuberculosis training and treatment programs in Tanzania, these experiential programs teach students the critical importance of social determinants of health. They learn that, nationally or internationally, the greatest problems in “health” do not arise from either malaria or atherosclerosis. They arise from the impact of upstream causes such as poverty, malnutrition and lack of access to high-quality education.

Assimilating these social, political, environmental and economic factors into health care delivery has been widely acknowledged by both governments and high-profile nonprofit organizations, such as The Bill and Melinda Gates Foundation and Ashoka.

So too, the arts and humanities have long been infused into the medical school curricula. At the turn of the 20th century, Abraham Flexner, called the father of modern medical education, acknowledged the essential nature of ethics and the humanities to the practice of medicine, and the liberal arts more broadly have historically been foundational to medical education.

Dartmouth is far from the only medical school to have long recognized the importance of the arts and humanities in fostering the empathy, compassion and humanity that are cornerstones for effective medical care and to have incorporated them into their curricula.

Schools across the country, including The University of Texas Health Sciences Center at San Antonio and more recently Harvard, have incorporated variations of “Art Rounds” as elective into their educational programs.

And at Yale, such programs are not only mandatory for students, but are incorporated into their continuing medical education workshops for alumni. Washington University’s medical historian, Kenneth Ludmerer, has noted that incorporation of the arts and humanities provides a needed counterweight to the ever-increasing load of technical information required of medical studies. This is a sentiment that has been echoed by the governing body for all LCME-accredited U.S. and Canadian medical schools, the Association of American Medical Colleges.

Moreover, the importance of fields of study outside of classical biomedical disciplines is also recognized for medical school faculty. Impact is key in academic advancement, and publication in journals such as The New England Journal of Medicine or Nature still trumps the achievement list for promotions committees.

But promotions committees at medical schools are broadening since “impact” is surely also evident in the 2013 op-ed piece on CNN.com by Dr. Gil Welch, which has had more than 3.6 million page views (and still counting). Policy and public understanding about end-of-life care are sculpted as surely by Atul Gawande’s best-seller Being Mortal: Medicine and What Matters in the End as by well-regarded scientific reviews of hospice care.

From Cash Cow to Albatross?

In short, the wide spectrum of fields in liberal education benefits the faculty as well as the students at medical schools.

Since its early days, medicine has been recognized to be both an art and a science. Despite the explosion in scientific knowledge over the past decades, the art has not been displaced. Rather, medical training is embracing the spectrum of arts, social as well as natural sciences, and humanities.

In an era of tight budgets and doubts about whether that onetime cash cow is now an albatross, administrators ought to consider the true contribution of medical schools to the university, not just as professional training grounds but also as an epitome of true liberal education.

And on the flip side, a society becoming obsessed with how we are wasting valuable dollars in undergraduate liberal arts should recognize how essential these fields are to the training of those who are entrusted with our health and medical care.