The World According to Rembert Browne ’09

The alumnus delivers his mashup of politics, culture and celebrity weekly in New York magazine. 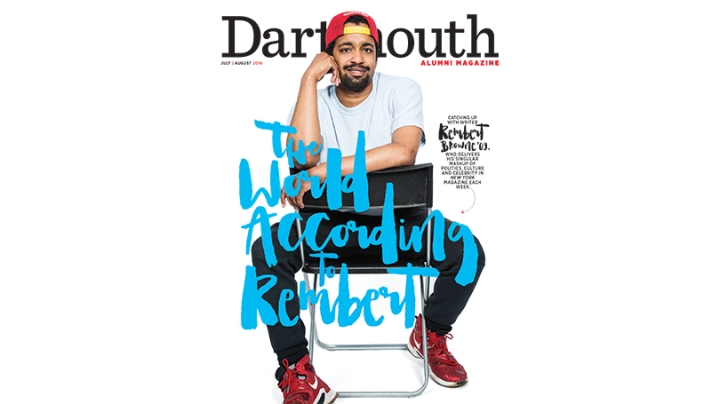 It was March 7, 2015, and Rembert Browne was nervous boarding a plane. He didn’t have a fear of flying and this wasn’t a case of middle seat dread or concerns over missing a connection. He was uneasy because this was no ordinary airplane. This was Air Force One.

Browne was one of five journalists chosen to travel with President Barack Obama to Selma, Ala., to commemorate the 50th anniversary of what became known as “Bloody Sunday,” the march for equal voting rights that led to vicious beatings of peaceful black demonstrators by police. To be part of this momentous day with the president was an honor for Browne, to be sure, but right up until takeoff, he was a wreck. “I thought, there’s got to be some reason why I shouldn’t be on this plane, like there’s a bomb someone put in my bag or some weed I don’t know about, and I’m going to get arrested or thrown off,” he says. “I was a mess.”

At the time Browne was a writer for ESPN’s sports and pop culture blog Grantland, where he’d built a following thanks to his unique brand of humor as well as his astute observations on bigger issues. One day he’d write a tongue-in-cheek analysis of Men Without Hats’ Safety Dance video, the next he was reporting from the ground amidst riots in Ferguson, Mo., after the shooting of Michael Brown. His annual “who won the year?” brackets were also eagerly awaited, in which he’d choose winners between odd matchups such as 50 Shades of Grey author E.L. James vs. Jamaican sprinter Usain Bolt, or boy bands versus Pinterest. For site founder Bill Simmons, hiring Browne was a slam dunk.

“We loved him immediately because he could write sports and pop culture and his writing was so entertaining and accessible,” says Simmons, whose new show Any Given Wednesday with Bill Simmons airs on HBO. “He’s one of those writers who makes you feel like he’s your friend even if you’ve never met him.”

Browne’s encounter with the president was bittersweet since he’d narrowly missed getting a blogging job he’d desperately wanted with the 2012 campaign. Now he was sitting at a conference table in the sky with Obama, a man he’d admired since high school. He turned the experience into a story that was insightful and deeply personal. Seeing the Edmund Pettus Bridge in person, Browne wrote, he was reminded of “this country’s ugly past … those brave men, women, and children who risked it all so this stain on American history would be seen by all, in hopes that it would never repeat itself.”