Connecting the Sciences, the Humanities, and the Future

The Institute for Cross-Disciplinary Engagement holds its launching conference. 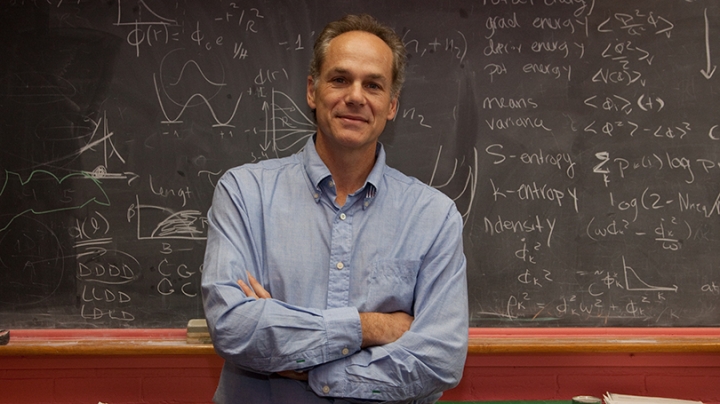 Marcelo Gleiser, the Appleton Professor of Natural Philosophy and a professor of physics and astronomy, is director of the new Institute for Cross-Disciplinary Engagement. (Photo by Joseph Mehling ’69)
9/23/2016
Body

Professor Marcelo Gleiser is gearing up for “The Sciences, the Humanities, the Future,” a conference that will launch the College’s Institute for Cross-Disciplinary Engagement (ICE).

Free and open to the public, the two-day conference will be held on Sept. 30 and Oct. 1 in Moore Hall’s Filene Auditorium.

Among the 10 speakers: Dartmouth’s Professor of Philosophy Adina Roskies, speaking Oct. 1 on “Free Will in the Age of Neuroscience,” and writer and physicist Alan Lightman (Einstein’s Dreams; Good Benito), speaking Oct. 1 on “The Physicist as Novelist.” The full conference program is available online.

ICE, which officially began on July 1, is dedicated to fostering dialogue between the sciences and the humanities in academia and in the public sphere. Gleiser, the Appleton Professor of Natural Philosophy and a professor of physics and astronomy, is director of the institute, which  is funded by a three-year grant from the John Templeton Foundation.

“Nothing speaks more directly to a liberal arts education inside and outside the classroom than the constructive engagement between the sciences, the social sciences, and the humanities,” says Gleiser. “This is precisely the mission of ICE: to provide a variety of platforms to effectively promote such engagement.”

The conference is ICE’s first major outreach to the public. There was, however, a three-part lecture series in August by ICE fellow Damian Sowinski, “From Epistemology to Information,” which, Gleiser notes, “addressed how we gather and interpret information about the world as we go along developing scientific theories.”

Sowinski is one of seven fellows who will be hosted by ICE during the institute’s first two years. They are expected “to further its core mission and to foment new directions for the engagement of the sciences, the humanities, and human spirituality,” as stated on the ICE website.

“Among our fellows, some have applied and some I invited to apply,” says Gleiser. “Others were suggested by Dartmouth colleagues. The main point for us was how well their research focus gelled with ICE's themes.

“What makes our mission uniquely exciting is that we create opportunities for this engagement both on campus and off, thus extending our conversation to the world at large. By focusing on some of the hardest questions society faces today and in the near future, ICE is forging new pathways connecting academia to the social sphere.”

Gleiser says that in addition to preparing for the conference, he has been developing a Massive Open Online Course, more commonly known as a MOOC. “I’ve been working very hard producing the ICE-sponsored MOOC “Question Reality!” that will be starting Jan. 31, 2017 on DartmouthX.” He also notes that this MOOC is an example of a bilingual effort, as it will be in both English and Portuguese.