Russian scientists this week reported signals thought to be from a star 95 light years from Earth. 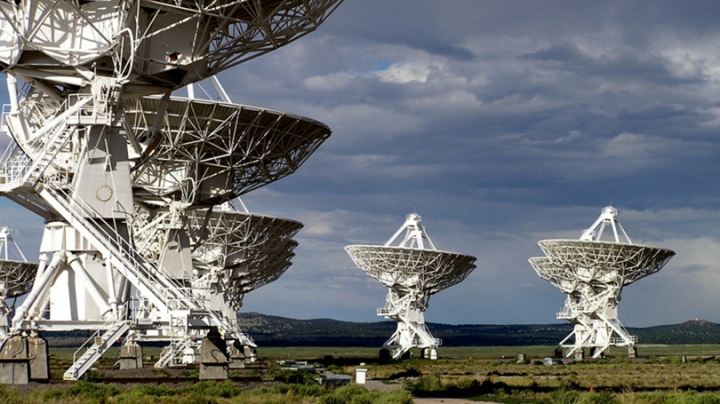 News of what appeared to be a strong radio signal from space could have important implications, but would at least be “interesting,” says Ryan Hickox, an assistant professor of physics and astronomy.

Assistant Professor of Physics and Astronomy Ryan Hickox, a black hole researcher, discusses the news of a radio signal. (Photo by Eli Burakian '00)

“The universe is always full of surprises,” he says.

The signal was detected by a radio telescope in Russia that scans the heavens for signs of extraterrestrial life. According to a Public Radio International (PRI) report earlier this week, the signal originated from the direction of a star about 95 light-years from Earth. The news was made public this week, but the signal was actually detected last year by the RATAN-600 radio telescope in Zelenchukskaya, Russia. PRI and other media outlets also mentioned this week that the signal could have come from a military satellite or could even have terrestrial origins.

“If this were proven to be a signal from another civilization this would of course be amazingly exciting,” says Hickox. “However, most likely this is some unusual physical process rather than alien communication. That would be interesting in itself. The most important thing now is to accurately determine the nature of this signal with more observations.”

“Critics are fond of saying that the whole thing is a huge waste of money, given that the chances of detection are extraordinarily small. ... But as Jill Tarter, former director of SETI, likes to say, we will only find if we look,” says Professor Marcelo Gleiser. (Photo by Joseph Mehling ’69)

A few days after the initial news broke, it appeared that Hickox’s skepticism was right on target. In an Aug. 31 statement published by the Special Astrophysical Observatory of the Russian Academy of Sciences, astronomer Yulia Sotnikova wrote, “Subsequent processing and analysis of the signal revealed its most probable terrestrial origin. It can be said with confidence that no sought-for [extraterrestrial] signal has been detected yet.”

The early reports of the signal were “exciting,” says Marcelo Gleiser, a professor of physics and astronomy and the Appleton Professor of Natural Philosophy. Exciting, he says, “not because they are from ETs; most probably they are not. But because they are testing our surveillance systems, the different instruments that scan the skies in search of some indication that we are not alone in the cosmos.”

The Search for Extra Terrestrial Intelligence program (SETI) has been active for more than 50 years, Gleiser says. “Critics are fond of saying that the whole thing is a huge waste of money, given that the chances of detection are extraordinarily small. ... But as Jill Tarter, former director of SETI, likes to say, we will only find if we look. The chances of winning the lottery are small, but if you don’t play you are sure never to win. Efforts such as these should continue, even if this recent signal goes away.

“After all, a positive detection would have profound consequences. We would know we are not alone. And would then have to decide what to do about it.”