Sept. 23, 2016 — Dartmouth College and UMass Lowell announce the launch of HillaryDonald.com—a set of tools that provides users with the ability to react and view an aggregation of reactions to the debates and other election events of the 2016 presidential election campaign in real-time. The two tools include the interactive app, HillaryDonald, which allows users to remotely “applaud” or “boo” live remarks by Hillary Clinton and Donald Trump in real-time, and a visualization tool called TwitterScope, which maps live political discourse on Twitter by ideology and sentiment. The tools serve as a new venue for a nationwide debate-watching party.

HillaryDonald App
Through the new free app, HillaryDonald, users can show their approval or disapproval of live political content, by simply tapping a thumbs up (or thumbs down) icon on their phone’s screen and shaking their cell phones when they like (or dislike) something a candidate says. Users’ remote applause or boos are then accumulated and visualized as a graph or map on HillaryDonald.com.

The app is based on react.to technology, which uses a simple and intuitive interface to collect immediate reactions and audience feedback to live events, such as presidential debates. User demographic information is also collected and displayed in real-time. In addition to the ability to react to specific events of the election cycle, users are also able to react to the election in general, expressing their in-the-moment sentiment. This allows the app to serve as a continuous real-time survey that measures the current pulse of the nation’s political sentiment. The HillaryDonald app is available for free through the App Store and Google Play. 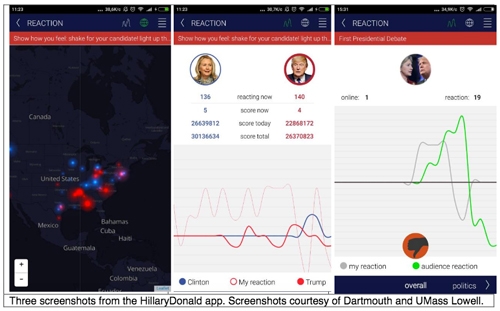 TwitterScope
TwitterScope provides users with a visualization of live political discourse in two dimensions— ideology and sentiment— by applying machine learning and natural language processing (NLP) techniques to real-time analysis of tweets. The interface illustrates what the left loves and what the right loves, and what the left hates and what the right hates? The ideology of politicians and journalists is plotted along the horizontal axis (from the left to the right) and the sentiment expressed in the tweet along the vertical axis (from positive to negative). The result is a living map of the changing attitudes across the political spectrum toward hot topics, including Donald Trump and Hillary Clinton, as well as other issues, such as abortion, guns and taxes. Through TwitterScope, Twitter feeds from 1,500 politicians (including senators, representatives and governors) and the 100 most-followed journalists on Twitter are analyzed in real-time.

Positive and negative sentiment is measured using the Twitterhawk sentiment analysis system, developed by the Text Machine Lab for NLP at UMass Lowell. The politicians’ ideological scores are calculated
using existing political science data in conjunction with statistical machine learning methods that use relevant patterns in previous tweets to identify political orientations. Ideological scores for the journalists were provided by students from Dartmouth’s “Campaigns and Elections” course. Each student was asked to rate the journalists they knew ideologically on a 5-point scale from very liberal to very conservative and their responses were averaged to produce the score. TwitterScope also features a broader sample of general Twitter users’ tweets, plotted only for sentiment. 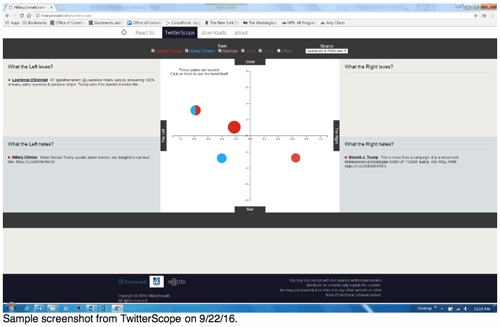 Other projects to be released on HillaryDonald.com include an augmented reality game based on react.to technology. Users will express support for political candidates by interacting with their 3D avatars placed throughout locales around the U.S. Another project in the works is a tool that monitors real-time emotional and physiological reaction to political events (including presidential debates) using galvanic skin response (the technology used in lie-detector tests) in volunteer subjects.