An Italian scholar teams up with film experts to preserve the work of an Italian icon. 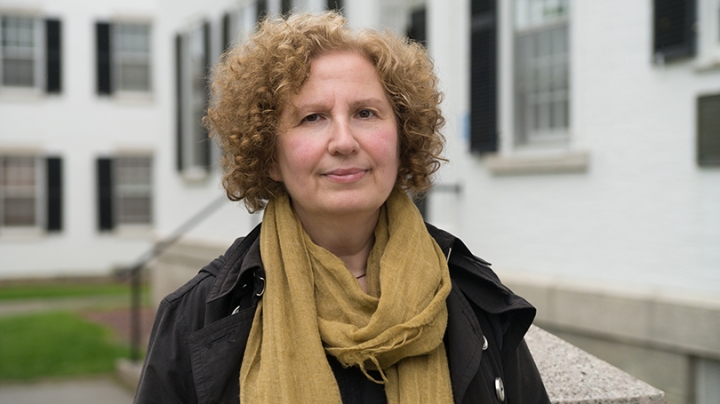 Research assistant professor Tania Convertini is working with the Media Ecology Project to preserve and study a 1960s-era Italian television show that helped bring literacy to the masses. (Photo by Eli Burakian ’00)
9/08/2016
Body

When Nick Vernice ’18 returned from an advanced language study abroad program (LSA+) in Rome this past spring—12 weeks of immersion in the culture, history, and language of Italy—he wondered how to keep up his newfound fluency back in Hanover.

The answer came by way of a job offer. Tania Convertini, a research assistant professor and director of the language program in the Department of French and Italian, reached out to see if Vernice wanted to be a research assistant for her project on Alberto Manzi, the Italian educator whose 1960s-era television show Non è mai troppo tardi (It’s Never Too Late) taught a generation of Italian workers how to read and write.

Manzi is an icon in Italy. His show, broadcast throughout the country by the Italian national television network, RAI, was part of a post-World War II effort to enlist the then-new medium in unifying a nation bitterly divided along geographic, political, educational, and class lines. In towns and villages where most people couldn’t afford TVs, the government would install one in a public place.

“People would gather in the town hall or the church or the local café to watch the program that was screened three times a week,” says Convertini. “The other days, they had a manual with exercises, and they had a teacher. It was a very communal experience”—one that had a significant impact on literacy.

“At that time the rate of illiteracy exceeded 10 percent,” Convertini says. Through Manzi’s show and the educational programming that supported it, “more than a million and a half people took the elementary school license exam—so they had some sort of assessment telling them that they were capable of reading and writing,” she says. “We don’t know how many others actually learned how to read and write, but probably way more than that number.”

Manzi brought a deep knowledge of pedagogical theory to the program. He also brought charisma. Often he would use black charcoal and white paper to draw scenarios for the words he was teaching, and bring in successful students—85-year-old women who had learned to read, for instance—as role models for his audience.

For Vernice, a double major in biology and Italian from Garden City, N.Y., who describes himself as “100 percent Italian,” the project has a personal side. “I understand how significant something like this would have been, for example, for my grandmother, who didn’t have an education. So it means a lot to me.”

Vernice is one of two students who this summer helped Convertini watch episodes of the program, transcribe them, break them up into searchable sections, and translate them into English. “It’s a lot of work, but I enjoy it. It keeps my Italian sharp,” he says. The other student, Daniela Jerez ’18, who is majoring in Romance languages with a concentration in Italian, will be continuing with the project in the fall.

Convertini’s project is a collaboration with Dartmouth’s Media Ecology Project (MEP), which is establishing the means for other scholars to access the archived episodes of It’s Never Too Late.

MEP is directed by Mark Williams, an associate professor of film and media studies who specializes in media history. It works to build partnerships with archives throughout the U.S. and around the world to make collections of rare media accessible to scholars—and to coordinate and develop digital tools such as those Vernice is using to tag episodes of Manzi’s show.

Williams became interested in Convertini’s research when she invited him to comment on a paper she was presenting on Manzi at a conference on humanities research organized by the Department of French and Italian last year. “Mark became an incredible advocate for my project,” she says.

Williams hadn’t known about Manzi’s show before. “I fell in love with the program and his methodology. The program was such a compelling example of what television could be as an educational institution, and also how significant pedagogy involving visual culture can be.”

And, he says, “It was called It’s Never Too Late, which is possibly the greatest title in the history of television.”

Williams and Convertini have been negotiating with the Centro Alberto Manzi in Bologna and with RAI for permission to establish a “scholarly-secure tier of access to archival material.” While the hope is to be able to work with all 484 episodes of It’s Never Too Late, they are currently using about a half-dozen episodes to test the process. Once these episodes are transcribed, tagged, and translated, Convertini says, “We plan on inviting scholars from the U.S. and Italy from different disciplinary perspectives to watch the videos and make annotations.”

“We can give back to the Centro Manzi by generating quality metadata and new scholarship,” Williams says. It’s a type of partnership between scholars and archives that MEP is seeking to replicate with dozens of other collections around the world. “We want to promote scholarship about archival materials, and we want to help respond to the crying needs of the archives, because they are crucial deposits of public memory,” Williams says.

Williams and his colleagues have received a number of grants to support MEP’s work, including, recently, funding from the Knight Foundation to develop software that can identify actions and objects in moving images. That research is a collaboration with Lorenzo Torresani, an associate professor of computer science who directs the Visual Learning Group at Dartmouth. If successful, Williams says, the program will be “a game-changer for archives”—a tool that can help to automate capacities for search in media collections.

Convertini’s research has been supported the Leslie Center for the Humanities and the Associate Dean for Arts and Humanities. Manzi is worth studying, Convertini says, because “the show is a unique and early example of distance learning guided by profound humanistic principles and supported by a solid pedagogical practice. In a time when we discuss the value and the importance of the humanities, his work offers us a relevant lesson.”