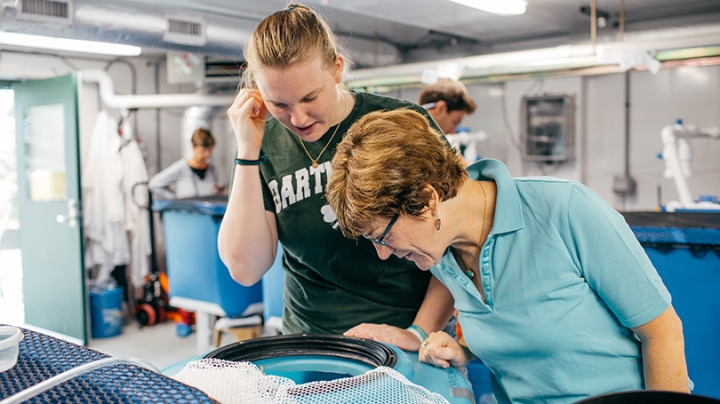 In Dartmouth’s aquaculture lab, Bridget Douglas ’18, left, shows Professor Anne Kapuscinksi a container of wastewater from fish tanks; the water can be filtered and processed to fertilize crops. (Photo by Robert Gill)
9/26/2016
Body

Aquaculture—raising fish rather than harvesting wild species—is one way to feed a growing population without depleting fish stocks. But for the most part, farmed fish eat food whose protein and fat ingredients are made from other fish. To Professor Anne Kapuscinski, that doesn’t make a lot of sense.

The Sherman Fairchild Distinguished Professor in Sustainability Science, Kapuscinski says making aquaculture sustainable over time and throughout the world will require new kinds of fish food.

She cites a study led by Pallab Sarker, a research assistant professor in the Environmental Studies Program, which found that salmon and trout aquaculture production currently consumes more wild fish than it produces in the form of edible meat.

“Doing that is causing environmental problems and food insecurity problems. It’s contributing to shortages of small ocean fish like sardines and anchovies, and it’s driving up the price of fishmeal and fish oil,” Kapuscinski says.

The industry is trying to replace these fish ingredients with soybeans and corn, but Kapuscinski says there’s a better menu, one that depends less on plants that are a staple of many people’s diet. The fish she and her students have been raising in tanks at Dartmouth, tilapia, have been feasting on a promising alternative to both fish products and terrestrial crops: marine microalgae.

“They’re found at the base of the oceans’ food web,” Kapuscinski says, “and they are nature’s synthesizer of one of the healthiest ingredients in fish flesh, omega-3 fatty acids.”

The question is whether such microalgae are a protein-rich, digestible substitute for fish meal and fish oil. The preliminary answer, based on experiments by Kapuscinski’s research team, seems to be yes.

“Our lab recently published a paper that showed that we could replace all the fish oil in the diet for tilapia with a microalga called Schizochytrium, and we got equal or better growth, better food conversion, and more efficient use of the protein in the diet,” says Kapuscinski. 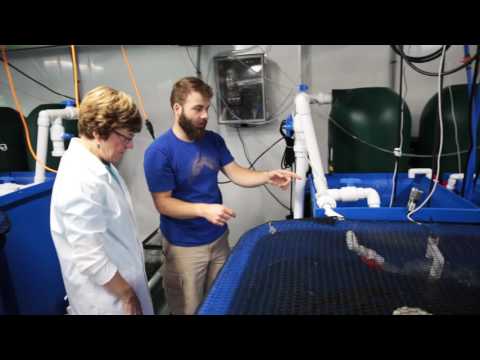 On a recent morning in a building equipped with state-of-the-art fish tanks that recirculate and clean the water, three students majoring in environmental studies performed daily chores under the watchful eye of lab manager Devin Fitzgerald, who used to work in commercial aquaculture.

The lab had finished one set of dietary experiments and was about to begin another. So in the meantime, the fish were being kept alive on conventional fish-based pellets, which also provided a baseline against which to compare more sustainable ingredients. Whatever replaces this commercially available food will have to be not only good for the environment, but also healthful for the tilapia—and for the people who eat them. “You need to make sure that all the nutritional qualities that we eat fish for are actually present in the fish filet, and that we can get that from them,” says Fitzgerald.

He watched as Oliver Edelson ’18 tested the tank’s water quality to make sure it was healthy for the fish. “Not only are we improving sustainability by creating alternative feeds, we are also helping the biofuels industry, Edelson says. That’s because the microalgae used in these fish-diet experiments are byproducts of algae biofuel production and could be sold to fish food producers. “Right now they are a waste product that the producers have to pay to get rid of, and it goes into our industrial waste system, when in fact it could be another revenue stream for them,” he says.

The waste water from the tanks is also recyclable as liquid fertilizer for crops. That was the focus this summer for Bridget Douglas ’18. “Once we backwash and take the solids out of the system, I am working on how that water can be used in a sustainable way, because it has a lot of nitrogen, which is good for plants. Right now our sodium content is too high for plants, so I am trying to figure out how to make the water healthier for plants and still healthy for fish. We are trying to close the loop,” Douglas says.

While Edelson tested the water, Ben Colello ’18 was using a probe to find dissolved oxygen and pH in each tank, and also taking the water temperature.

“Coming into this project, I knew nothing about aquaculture, but I have learned that the way we use fish both for our own consumption and to feed other fish cannot last,” says Colello. “So the work we are doing here is going to help save a lot of fish that we haven’t caught yet in the ocean and make us a more sustainable society as a whole.”

Experiments are continuing this term. Kapuscinski hopes the findings “will guide the world’s fastest growing food sector to a sustainable path, and help feed a rapidly expanding world population.” 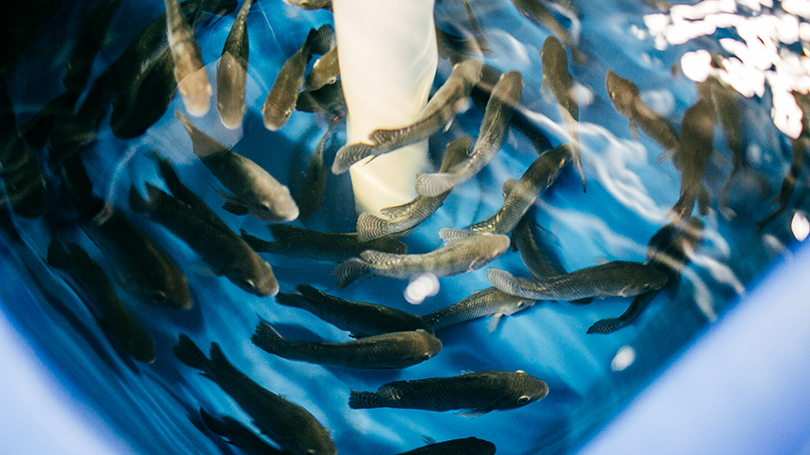 Tilapia being raised for fish-feed experiments swim in their tank at Dartmouth’s aquaculture laboratory. (Photo by Robert Gill)
Written by
Charlotte Albright
Share this
FacebookTwitterEmail
Articles