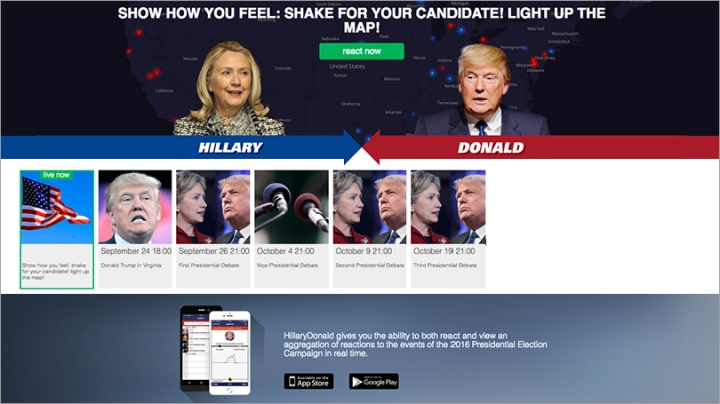 A new phone app that lets users cheer or boo remarks by Hillary Clinton or Donald Trump, developed through a collaboration of Dartmouth and the University of Massachusetts Lowell, has been released just in time for the first presidential debate, which takes place Monday.

“We all know that our collective attention span is shrinking fast,” says Gronas, who leads the project. “We thought that presidential elections would make a great case study of this newest universe of shortened attention, with quick immediate live real-time reactions in different domains—virtual boos and applause and verbal reactions. During the upcoming debates, we would like HillaryDonald to become an instrument for a universal debate-watching party.”

Bafumi plans to get the party started at Dartmouth. “We will test the app on Monday during a debate-watching party that includes my ‘Campaigns and Elections’ students,” Bafumi says.

The HillaryDonald app, launched Friday, enables users to show their approval or disapproval of live political content by tapping a thumbs up or thumbs down icon, and then shaking their cell phones when they like or dislike something a candidate has just said. Users’ remote applause or boos are collected and graphed in real time on HillaryDonald.com. User demographic information is also collected and displayed in real-time, creating a continuous live measurement of political sentiment.

In addition, the TwitterScope feature on the HillaryDonald website provides real-time analysis of Twitter feeds from 1,500 politicians and the 100 most-followed journalists. The ideologies of all tweets, measured by UMass Lowell’s Twitterhawk sentiment analysis system, are plotted along a horizontal axis from left to right and the sentiment expressed in the tweet is plotted along the vertical axis from positive to negative.

The result is a living map of the changing attitudes across the political spectrum on controversial topics such as abortion, guns, and taxes, Gronas says.

The HillaryDonald app is available for free through the App Store and Google Play.