Up to $42 million will fund study of the effects of childhood exposure to environmental factors. 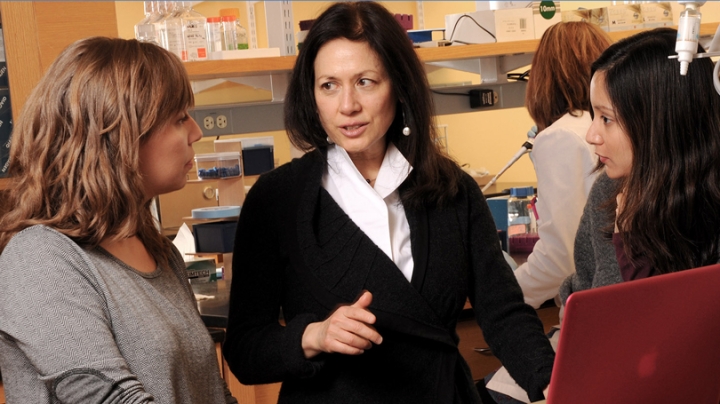 Margaret Karagas, a professor of community and family medicine, talks with post-doctoral fellow Shohreh Farzan, left, and Anala Gossai. Gossai is a first-year graduate student in the Quantitative Biological Sciences Program. (Photo courtesy of the Geisel School of Medicine)
9/22/2016
Body

Researchers at Dartmouth’s Geisel School of Medicine and Dartmouth-Hitchcock health system have been awarded up to $42 million to investigate environmental influences on child health. The highly competitive awards are part of a $157 million, seven-year initiative known as Environmental Influences on Child Health Outcomes (ECHO) that was announced this week by the National Institutes of Health (NIH).

The ECHO program will study how exposure to a range of environmental factors in early development, from conception through early childhood, influences children and adolescent health. The awards will build the infrastructure and capacity for the ECHO program to support multiple, longitudinal studies that extend and expand existing studies of mothers and their children.

ECHO research will focus on factors that may influence health outcomes around the time of birth, as well as into later childhood and adolescence—including upper and lower airway health and development, obesity, and brain and nervous system development.

“Critical gaps remain in our understanding of the early drivers of child health and development that have life-long consequences,” says Margaret Karagas, chair and professor of epidemiology at Geisel, who will collaborate closely with colleagues at Dartmouth College’s Arts and Sciences, Geisel, and Dartmouth-Hitchcock in the effort.

Led by Karagas, the New Hampshire Birth Cohort Study—a research project that since 2009 has been investigating how various factors such as contaminants in the environment affect the health of pregnant women and their children in New Hampshire and Vermont—will receive up to $40 million in funding over the next seven years to help lead ECHO’s research efforts.

A critical component of ECHO will be to use the NIH-funded Institutional Development Awards (IDeA) program to build state-of-the-art pediatric clinical research networks in rural and medically underserved areas, so that children living in these communities are able to participate in clinical trials.

“This initiative will provide a much-needed central coordinating platform for pediatric clinical trials in the Dartmouth community,” says Paul Palumbo, an infectious disease specialist at the Children’s Hospital at Dartmouth (CHaD) and a professor of pediatrics and of medicine at Geisel. He will receive up to $2 million in funding over the next four years to conduct pediatric clinical trials in New Hampshire as part of the IDeA States Pediatric Clinical Trials Network.