Writers Marlon James, Marjane Satrapi, and Jonathan Franzen are among the speakers. 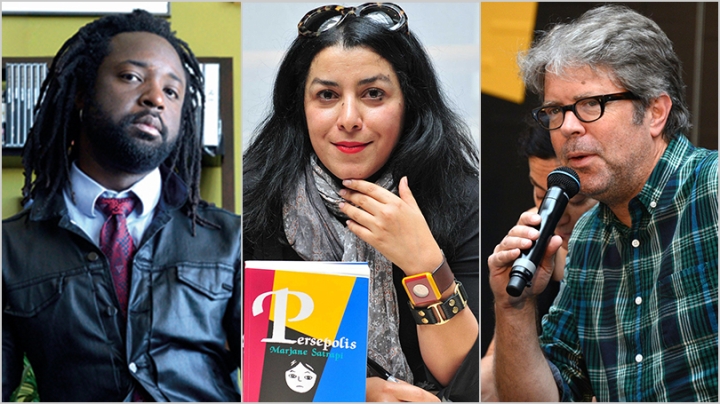 Iranian-born graphic novelist and filmmaker Marjane Satrapi, the author of Persepolis, will be on campus Oct. 6 to give a public talk at 4 p.m. in 105 Dartmouth Hall. She will meet with students in Occom Commons immediately afterward.

Satrapi’s talk kicks off a series of literary and artistic visits sponsored by the Leslie Center for the Humanities. “We are dedicated to bringing in voices from a diversity of cultures, from within and without the United Sates,” says Graziella Parati, the center’s director.

On Oct. 20, the Leslie Center will host Jamaican novelist Marlon James, whose A Brief History of Seven Killings won the 2015 Man-Booker Prize, and then, in January, the center will host Miranda July, whose debut novel The First Bad Man was a New York Times bestseller; and world-renowned Palestinian artist Emily Jacir. In the spring, the center hosts National Book Award-winner Jonathan Franzen, author of The Corrections, Freedom, and Purity, on April 17, and Palestinian-American poet Naomi Shihab Nye, on May 3.

Persepolis is a graphic memoir of Satrapi’s childhood during the Iranian revolution. Some of its simplest images are its most powerful—for instance, the drawing of 10-year-old Satrapi and her classmates, boys and girls together, posing for a class portrait in all their individuality. The following year, post-revolution, the portrait contains only girls, because they are no longer allowed to study with the boys—and now their heads are covered in regime-mandated veils. But the next frame shows the girls in the schoolyard, using their veils as jump ropes and props for imaginative play.

“We didn’t really like to wear the veil, especially because we didn’t understand why we had to,” Satrapi writes, capturing, in just a few panels, a child’s-eye view of cultural upheaval.

The Leslie Center is sponsoring a free screening of the animated adaptation of Persepolis at 6 p.m. on Oct. 5 in the Loew Auditorium in the Black Family Visual Arts Center.

Originally published in France, where Satrapi now lives, Persepolis won the Prix Alph’art Coup de Coeur at Angoulême, the Prix du Lion in Belgium, the Prix Alph’art du meilleur scénario, and the Prix France Info. Named one of the “100 best books of the decade” by the London Times, it has been translated into dozens of languages. The film version won the Jury Prize at the Cannes Film Festival. Among Satrapi’s other works are graphic novels about her grandmother (Embroideries) and great-uncle (Chicken with Plums, also made into an award-winning film), as well as several children’s books.

On Oct. 20, James will give a public reading at 4 p.m. in Haldeman 41, and will meet with students afterward in Haldeman 246.

At 704 pages, James’ novel A Brief History is not brief, and the violence it portrays is not limited to seven people, but in it James paints a remarkable picture of Jamaica in the late 20th century, tracing the intrigue around the attempted assassination of reggae icon Bob Marley in Kingston in 1976, channeled through the voices of gangsters, orphans, politicians, CIA agents, reporters, tourists, refugees, and others—the rich and the poor, the guilty and the innocent, the living and the dead.

In addition to the Booker, A Brief History won the American Book Award, the Anisfield-Wolf Book Prize, the OCM Bocas Prize for Caribbean Literature, and the Minnesota Book Award, and was a finalist for the National Book Critics Circle Award. James, who teaches English and creative writing at Macalester College in Minnesota, is also the author of John Crow’s Devil and The Book of Night Women, which won the 2010 Dayton Literary Peace Prize and the Minnesota Book Award.

Written by
Hannah Silverstein, MALS ’09
Share this
FacebookTwitterEmail
In the News