The world’s largest flower, which blooms about once a decade, is ready to make an appearance. 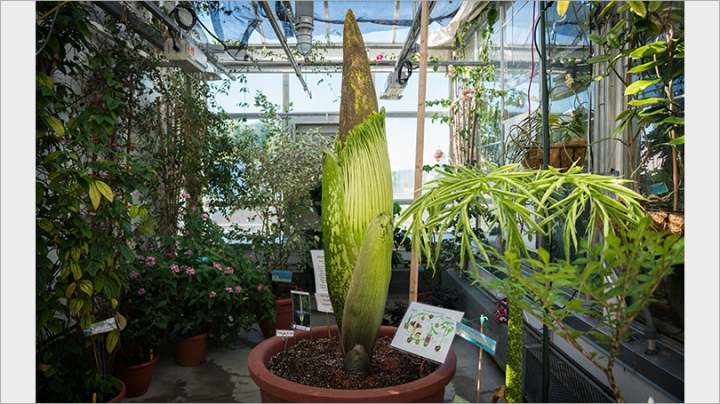 Dartmouth’s titan arum, or corpse flower, is getting ready to bloom at the Life Sciences Greenhouse. (Photo by Eli Burakian ’00)
9/15/2016
Body

An unusual opportunity awaits visitors to Dartmouth’s greenhouse atop the Class of 1978 Life Sciences Center: The resident corpse flower plant is about to bloom, something that happens only once every seven or eight years.

Dartmouth’s 13-year-old specimen of Amorphophallus titanum lives in the greenhouse and has been affectionately named “Morphy.” Greenhouse Manager Kim DeLong says the flower will stay open for two to three days. Once open, its odor will be the strongest for only a day or so and will dissipate several days after it blooms. The flower is currently five feet tall and may grow several more feet before it opens early next week.

Also known as a titan arum, the plant grows to a height of six to nine feet. It is rare, even in its native Sumatran rainforests. Its flower—the largest in the world—appears as a single bloom, exhibiting striking color, deep green on the outside and dark burgundy on the inside. Its single frilly-edged petal encircles the thick, fleshy central stalk that resembles a gigantic phallus.

The plant is called the corpse flower because when in full bloom it smells bad—like rotting flesh. But its odor does attract pollinators like flies and beetles in the wild. In spite of its aromatic essence, it has a committed following among horticulturalists. This summer, only seven flowers were reported to have bloomed in the U.S.

The greenhouse is open to the public year-round and will have special extended hours for viewing the rare flowering event. Visit the greenhouse website for the most up to date information. You can also see the plant on the greenhouse’s live webcam at http://www.dartmouth.edu/~grnhouse/

Dartmouth’s plant bloomed once before, in July 2011. Since then, it has grown a leaf on two separate occasions, during which the leaves were photosynthesizing and storing energy before it sent up the current flower. This past July, the Life Sciences Greenhouse repotted the plant, which had an estimated weight of 37 to 39 pounds.

Dartmouth’s plant was grown from seed in 2003 by a private grower in New Hampshire and was acquired by the College in 2007. The plant typically doesn’t flower until it is is about seven or eight years old.