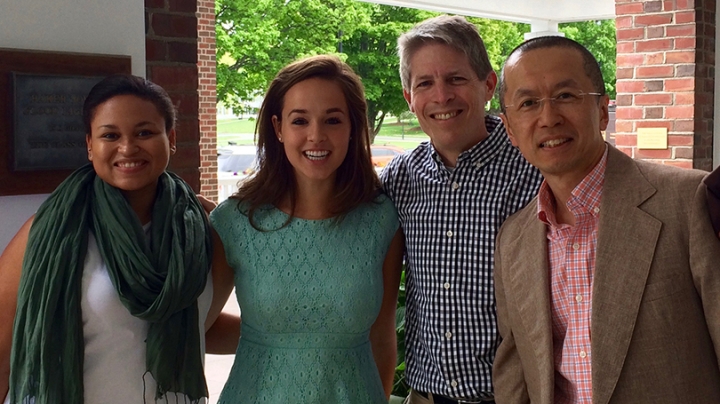 Despite the often-polarized debate over diversity on American campuses, new research finds that at Dartmouth, students broadly support giving priority to people from underrepresented groups in faculty recruitment and undergraduate admissions.

“If you read just the popular press about this issue all last year—the Yale protests, the Princeton protests, the Dartmouth protests, actually there are a dozen schools you could pick—the impression you could have easily come away with is that campuses are deeply divided on this,” says government professor John Carey, who coauthored the study with government professor Yusaku Horiuchi, and then-Dartmouth seniors and Madeline Brown ’16 and Lauren Martin ’16.

“We didn’t find evidence of that,” says Carey, the John Wentworth Professor in the Social Sciences.

Horiuchi, the Mitsui Professor of Japanese Studies, says Brown and Martin had co-author status on the peer-reviewed paper because their work went well beyond research assistance. They participated in formulating the questions, designing the study, and interpreting the results, he says.

Both Brown and Martin first studied with Horiuchi when they took his quantitative political analysis class as first-year students. After working for him as research assistants, they developed the idea of exploring Dartmouth students’ opinions about diversity by applying some of the cutting edge empirical research methods Horiuchi teaches.

“When we designed our survey, Maddie and Lauren’s input was so useful,” Horiuchi says. “Particularly in 2015, there were so many things happening around diversity, not necessarily comfortable events for them. They were of course in those communities, they observed, and they interacted with other students.”

Martin, who was a Rockefeller Leadership Fellow at Dartmouth and is now a paralegal for the public integrity section of the U.S. Attorney’s Office in the Eastern District of New York, says the project helped her develop academic and research skills, but it did much more.

“It also should not be underrated how important it was to my personal experience as a minority, female student at the College that I spent the last year of my time there talking candidly and openly with two professors about issues surrounding faculty and student diversity at Dartmouth, and that my opinions and experiences were treated with the highest respect (especially during a school year and a national moment when tensions were extremely high),” Martin wrote in an email.

The researchers invited half of all Dartmouth undergraduates to take part in a survey about undergraduate admissions and invited the other half to take part in a survey of faculty recruitment. The surveys presented students with a series of side-by-side comparisons of two candidates, each classified by a randomly generated list of attributes, including race and gender as well as several others. Students were asked to pick one of the two candidates. A total of 607 students responded to the undergraduate admissions survey and 501 responded to the faculty recruitment survey.

The data showed students favored an African American or Native American undergraduate applicant by 15 percentage points over a white applicant, and a Hispanic or Latino applicant over a white applicant by about 7 percentage points. Respondents slightly preferred a woman over a man; strongly preferred a socioeconomically disadvantaged student over an affluent one; and a first-generation college applicant over one coming from a family where college had been the norm, Carey and Horiuchi said in a Washington Post story about the research.

“Most important, there were almost no statistically significant differences in these preferences across various groups of students. Responses from whites, blacks, Latinos and Asian Americans, from men and women, and from students across a range of socioeconomic backgrounds were similar,” they wrote.

“Still, we are struck by the levels of agreement—or the lack of clear cleavages—for giving priority in admissions to applicants from traditionally underrepresented groups in a manner consistent with affirmative action programs already in place,” Carey says. “We also found support for prioritizing diversity in faculty recruitment decisions, driven primarily by demand among the groups most profoundly underrepresented among university faculties.”

Martin says she sees reason for optimism in the research: “Our results taught me that Dartmouth students, on the whole, think representation in the classroom is important, that there is inherent value in diversity, and that even when our voices disagree and argue, there is also a great deal that we hold in common.”

One of the biggest surprises to come out of the project, Carey says, was that there is very little existing research on the topic of diversity, particularly since the issue has become so politicized in higher education.

“It's remarkable how few researchers have asked undergraduates about diversity, period,” he says.

This realization spurred Carey and Horiuchi to expand their research. They are now preparing to launch a large, multi-university project to investigate students’ preferences for prioritizing traditionally underrepresented groups in faculty recruitment and undergraduate admissions. One of the aims is to better understand whether student attitudes differ by the characteristics of a school—including size, public-versus-private status, selectivity, the demographics of the student population, and location, Horiuchi says.

If everything goes well, they expect to have the data collected by next fall, Carey says; then they consider co-authoring a book on the topic that they hope will contribute to the discussions about student and faculty diversity in American higher education.

“The book would not be written right away, but on the other hand, the question of campus diversity is not something we're going to solve in the next 12 months,” Carey says.