Telluride at Dartmouth: Science Fiction, a Musical, and More 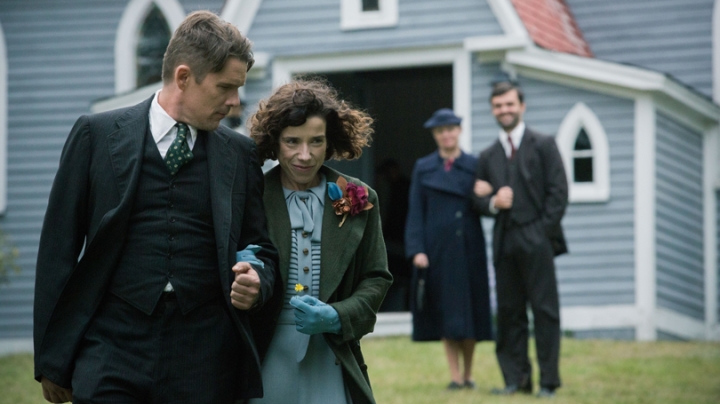 In Maudie, Sally Hawkins plays the woman who became one of Canada’s most beloved folk artists. (Image courtesy of IFC)
9/02/2016
Body

The Hopkins Center for the Arts’ 2015-16 film season opens with six films straight from the famed Telluride Film Festival—stories about an alien invasion, Chilean poet and leftist politician Pablo Neruda, a French intellectual whose life unravels, a beloved Nova Scotian folk artist, and an agonizing father in post-Ceaușescu Romania, as well as a sunny, classic MGM-style-musical set in modern-day LA. Telluride at Dartmouth runs Friday, Sept. 16, through Thursday, Sept. 22.

The Telluride Film Festival, occurring each Labor Day weekend in Colorado, is considered one of the premier arts events in the country. Each year, hundreds of cinema lovers flock to the tiny mountain town of Telluride to immerse themselves in a three-day celebration of film. Telluride consistently presents a remarkable and diverse slate: the rare and unknown, restored gems, retrospectives, and the latest (and greatest) from the upcoming season. The New York Times calls Telluride “the smallest, most original, and most stimulating of the major festivals.”

Telluride at Dartmouth came out of a long-standing relationship between the Colorado festival and College. Each year, six films come directly from Colorado for special advance screenings at the Hopkins Center. This is an opportunity for the Dartmouth community to get a sneak peek at the latest international films—often months before they're released. All shows are in Spaulding Auditorium.

Passes and ticket sales begin Wednesday, Sept. 7, at 10 a.m. online, by phone at (603) 646-2422 or in person at the Hopkins Center Box. Single tickets are $15 each ($6 for Dartmouth students) and a pass to view all six films is $75 ($30 for Dartmouth students). Doors open 30 minutes before show time for pass holders. Individual ticketholders will be seated approximately 20 minutes before show time.

A linguist (Amy Adams), a physicist (Jeremy Renner) and a soldier (Forest Whitaker) are sent to a secret site where one of 12 alien crafts has landed so Adams can communicate with The Others. The wordless anxiety of trying to cope with the unknown—or perhaps unknowable—turns out to be far more compelling and credible than Hollywood’s usual sci-fi, whose aliens often aren’t alien enough. Director Denis Villeneuve (Incendies, Sicario) works from an adaptation of Ted Chiang’s story, employing silence, misdirection, intellectual sophistication and minimal violence. Set in a mysterious world of uncertain colors and shifting geometries, Arrival is authentic science fiction. (US, 2016, 116 m)

An army of exuberant L.A. morning commuters leap out of their cars to sing and dance a pedal-to-the-metal celebration of hopefulness and perpetual sunny skies. Writer-director Damien Chazelle revives the all-singing, all-dancing MGM musical, and pays homage to Martin Scorsese’s New York, New York. The moody Sebastian (Ryan Gosling), a devotee of classical jazz, and ambitious Mia (Emma Stone), a waitress and actress, meet cute, initially resist one another, and then quickly see the light. After the relentless intensity of his Best Picture nominee Whiplash, Chazelle has created what has been described as an airy and light confection. (US, 2016, 126 m)

Charged with treason in 1948, Chile’s acclaimed poet and leftist Senator Pablo Neruda goes into hiding. Director Pablo Larraín (No) sees these events through the eyes of a resentful cop giving obsessive chase. Luis Gnecco plays Neruda with eloquence and comic intelligence, and Gael García Bernal does the same as his pursuer, a secret sharer of Neruda’s imagination. With a script that echoes Brecht and Borges, Larraín fashions a lyrical political essay, a sly tribute to film noir and an intricate meditation on the irresolvable tension between aesthetic and political desire. Just 39 years old, Larraín has made four acclaimed films in eight years. But this reinvention of the biopic is being recognized as his masterpiece to date. (Chile, subtitled, 2016, 107 m)

Stunted in childhood by the effects of acute arthritis and a repressed, poverty-stricken family, Maude Lewis somehow taught herself to paint and went on to become one of Canada’s most beloved folk artists. After only a few moments of screen time, Sally Hawkins convinces viewers of Maude’s tenacity, eccentricity, and singular humor. Ethan Hawke employs his trademark charm as a gruff, inarticulate fish peddler with severe anger-management issues. Theirs is a curious, tender romance born of desperation, need and luck. Director Aisling Walsh tells the story with fitting simplicity, using minimal locations and characters and transforming the bleak landscapes of Nova Scotia as windows into Maude’s imaginative world, as she continues the ever-challenging process of self-discovery. (Canada, 2016, 115 m)

Romeo (Adrian Titieni), a conscientious doctor, has dedicated himself to helping his daughter Eliza finish high school. Her degree will enable her to study overseas, offering her opportunities denied to Romeo and his wife. A single moment of violence threatens these efforts, and each of Romeo’s potential solutions violates the principles he has strived to teach his daughter. Using long takes, Palme d’Or-winning writer-director Cristian Mungiu (4 Months, 3 Weeks, 2 Days) plunges viewers into this ambiguous moral labyrinth with Romeo. Mungiu has crafted another Romanian New Wave masterwork, a compelling investigation of the nation’s conflicted, corrupted soul in the post-Ceaușescu years. (Romania, subtitled, 2016, 128 m)