Baker-Berry Bells Are Back, Just in Time for Homecoming

The tower restoration team preserved the old bells but upgraded the operating system. 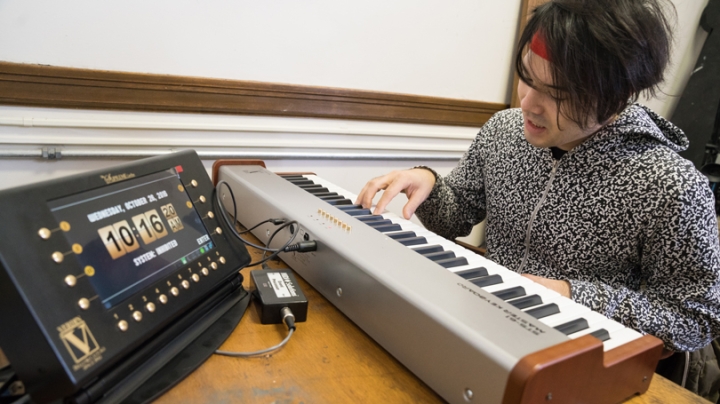 Dartmouth’s historic bells are back. Silenced for almost five months during the restoration of the Baker-Berry Library Tower, they’ll ring in homecoming this weekend, sounding as they always have.

But behind the scenes, a new computer system will be in use. College bell ringer Jefferey Mentch, GR ’17, has been spending time in the tower control room, practicing on the tabletop keyboard and learning how to select songs from a music library stored on the computer, which also controls the clock. He can operate the bells from his own laptop anywhere on campus.

In the tower, the digital music master’s candidate taps a computer screen to activate the system and plays a few notes, checking on whether they can be heard outdoors as well as on a set of practice chimes in the control room. 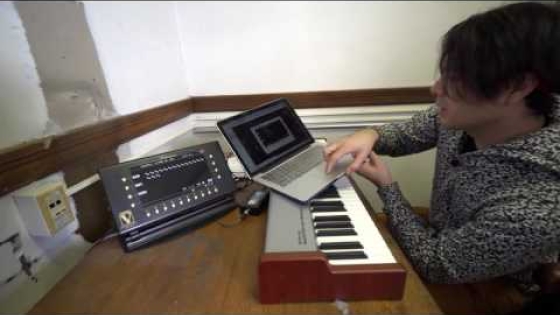 This weekend, the music will be a little more complicated. “Someone has requested the Harry Potter theme for homecoming,” he says, “so I have to figure out how to program that.”

The new system, which transmits electronic signals to the bells’ strikers in the belfry, will be “more robust, and less prone to failure,” than the old one, he says. In the past, popular requests (which can be made by email) have included “Happy Birthday,” “Hey Jude,” “Tired of Being Alone,” and “Pomp and Circumstance.”

Mentch likes being part of a long tradition. “You feel kind of powerful,” he says about reminding people of time passing and occasionally playing songs that grab their attention. Automated chimes ring every hour and half hour from 8 a.m. to 10 p.m. The “Alma Mater” is programmed to play at 6:01 p.m. every day, but Mentch gets to choose songs and grant requests at other times.

Mentch is the latest in a long line of bell ringers, according to a blog post by Memory Apata, music library supervisor at the Paddock Music Library. “Students have served as bell ringers, horn blowers, and drum beaters since the College’s founding,” she writes. “The call to prayer and recitation was sounded by the blast of a horn until the College received its first bell in 1780, which was housed at Dartmouth Hall. After the arrival of the bell, a student was assigned each year as the bell ringer and received special lodgings in exchange for performing the early morning duties.”

When Baker Library was built, in 1928, library trustee Clarence Little, Class of 1881, donated $40,000 for the 15 bells still in use today. A 16th bell was given in 1981 in memory of Donal F. Morse '51, along with money to maintain the system and pay the ringer. The bells vary in size from 200 to 5,300 pounds and play every note in an octave-and-a-half range except E flat. Until 1979, when they were computerized, the bells were rung using a set of paper scrolls similar to player piano music. Those yellowed artifacts are still stored in a wooden cabinet in the control room.

Patrick O’Hern, who has been in charge of the restoration project for Facilities Operations and Management, loves spending time in the bell tower surrounded by vestiges of Dartmouth history and getting, through the window, a bird’s eye view of the Upper Valley. In the foreground, new copper roofing—a sight unseen since 1928—shimmers in the sun. “Over the next 30 years,” O’Hern says, “it will oxidize to a greenish patina.”

O’Hern says the $5 million tower restoration—completed on budget and on time—has been the best project he has ever worked on at Dartmouth.

“There won’t be another one like it on this site for at least another 85 years,” he says, “so it’s been amazing to be part of this piece of history. This tower and these bells are icons for Dartmouth and the town of Hanover. All the workers have been really enthusiastic, and there were no bad surprises—only good ones.”

He was pleased that the bells themselves, as well as the weathervane, could be refurbished rather than replaced. And the past has been preserved in smaller ways, too. A few days ago, workers discovered in a bell tower wall a ticket to Winter Carnival 1929.

“When I first hear these bells ring out on Friday, I’m going to feel very proud of the way everyone worked together to make all this happen,” O’Hern says.