The spirit of generosity has taken many forms, say College officials. 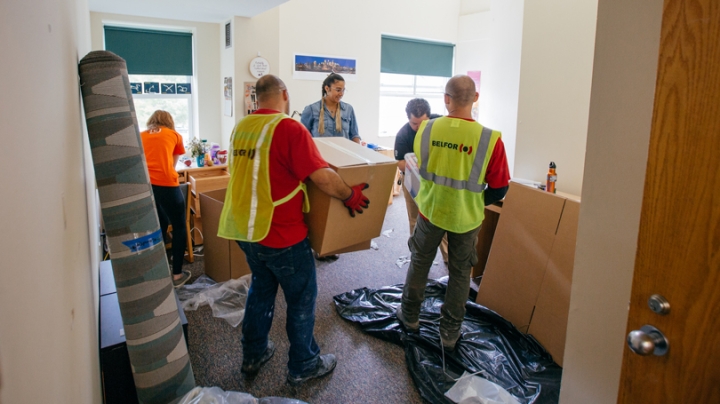 Abigail Buckley ’19, in orange T-shirt, gets help moving out of her room from employees from Belfor, a property restoration company, and from Kianna Burke ’12, center, and Sebastian Munoz-Medina. (Photo by Robert Gill)
10/05/2016
Body

The smell of smoke lingered on East Wheelock Street Monday afternoon as inspectors and College officials surveyed damage from the four-alarm fire in Morton Hall that began shortly after midnight on Saturday.

Though no students were injured in the fire—which New Hampshire fire marshals say was the result of an unattended charcoal grill—it has destroyed personal possessions and displaced 67 students for the remainder of the fall term. In a message to the community on Monday, President Phil Hanlon ’77 wrote that “the disruption to the students is profound, and some of the things they lost are irreplaceable.”

Harry Kinne, director of safety and security, praised emergency responders who came from communities as far away as Claremont, N.H., and Bradford, Vt.

“It was a very difficult fire to fight because of the type of building it is,” Kinne says. “They had at one time three aerial trucks here—it was a really well coordinated, fine attack on the fire itself. I believe the response from everybody involved helped to mitigate certainly any injuries or loss of life that might have occurred, but also limited the damage to Morton Hall, not allowing it to affect the two other buildings that are tied into that facility.”

“The entire Dartmouth community owes a debt of thanks to the members of these organizations, most of whom are volunteers,” President Hanlon wrote.

Staff and volunteers worked through the weekend, using House Center A—the social space Allen House and South House communities share—as a staging area. There, Morton Hall residents found food, blankets, information, and other resources and support from staff and friends. The College contacted parents of all the affected students. Hanlon, Provost Carolyn Dever, Vice Provost Inge-Lise Ameer, and Dean of the College Rebecca Biron joined staff members from residential life, the undergraduate deans office, counseling services, and technology and computing in a meeting with the residents on Saturday. Counseling services continue to be available. Students in need can contact Safety and Security 24 hours a day to get referrals.

“I am inspired by the courage and resilience of these students—and so proud of how Dartmouth’s students, faculty, and staff have responded to this crisis. At every level, community members are rising to the challenges of this truly difficult situation, and finding ways to support each other,” says Dever. “I am also grateful for the quick, expert response of emergency first responders from Hanover and neighboring communities.”

By Saturday evening, displaced students had received new room assignments for the remainder of the fall term, says Mike Wooten, associate dean of residential life and director of residential education. These include dorm rooms and converted lounge spaces in other residence halls and College-owned apartments and houses on campus and around Hanover. Most roommates were able to stay together or live near each other.

The fire comes in the early months of Dartmouth’s new residential system, in which all students belong to one of six house communities. Biron says it is too early to know the effect of dispersing 67 members of East Wheelock House, the community to which Morton Hall belongs, to locations all around campus.

“A core idea behind the house system is for students to live in close proximity to each other—but communities also grow from shared experiences, and this week we’ve seen students respond with generosity, grace, and open hearts,” Biron says. “With creativity and flexibility, I’m hopeful that the members of East Wheelock House community will emerge from this crisis even more committed to each other.”

On Saturday evening, students were briefly allowed to return to their rooms in Morton Hall to retrieve clothes and essential belongings, Wooten says. On Monday and Tuesday, they returned once again, this time to check out of Morton for the rest of the term. Staff and volunteers from across campus were on hand to help them pack and move what they could salvage.

“That’s a great example of the College community response,” says Wooten. “We easily got four volunteers for every one Morton Hall student signed up to help throughout the day. It’s been amazing.”

The spirit of generosity has taken many forms, from the sorority that served breakfast to firefighters on Saturday morning to the alumni who have been shuttling students into West Lebanon for supplies to Hanover residents who have offered space in their homes, Wooten says. “In fact we’ve probably had more requests to help than we actually need at this point. We do have lots of needs, but, as in every disaster, it can take a while to match the response to what the students actually need and want.”

Some immediate needs are being met quickly. The Information Technology Services department has loaned laptops to students who lost computers. E&R Laundry Service has offered to wash the students’ clothes free of charge. Faculty are making accommodations for affected students in their classes. Alpha Xi Delta and Alpha Kappa Alpha are sponsoring a donation drive, with bins where community members can leave clothes, toiletries, and other necessities at Collis Student Center, Novack Café, and AXD’s house at 17 Wheelock Street.

Other losses have less simple solutions. “There are probably six rooms in which students lost everything. They just lost everything,” Wooten says. “There are people who didn’t have insurance and don’t have the means to replace what they’ve lost. The College will make sure that they’re going to be OK.”

Morton Hall will be closed, at least for the remainder of fall term. Officials continue to investigate the fire.