A new photovoltaic panel is going up near Moore Hall. 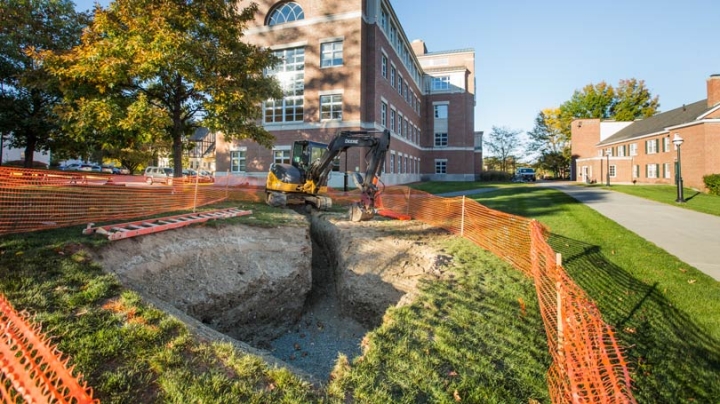 Work began this week on the installation of the photovoltaic panel. (Photo by Robert Gill)
10/11/2016
Body

Construction has begun on a state-of-the-art solar panel adjacent to Moore Hall. The panel moves both up and down and sideways to track the sun throughout the day, making it 40 percent more efficient than a fixed unit. Equipped with an anemometer, the solar tracker takes a vertical position in high winds to prevent damage. It’s also designed to shed snow easily. The Norwich, Vt., manufacturer Solaflect has created a lightweight structure that uses less steel than other trackers.

“That makes it cost-effective. It’s really cutting edge technology,” says Timothy McNamara ’78, associate director of real estate for the College. Designed for household use, the panel will provide only some of the energy Moore consumes. But McNamara says it’s also intended to educate passers-by about the benefits of solar power.

“It’s an important demonstration project. A plaque in front of the tracker will explain how the solar panel works, and will give people a website where they can track its performance,” he says.

McNamara says the location next to Moore is ideal because it has good solar exposure in a heavily travelled pedestrian corridor. “We hope it raises awareness of alternative energy. Even though you see a lot of these solar panels on roofs, not a lot of people have walked up to one on the ground and seen what it looks like,” he says. “And it will be really interesting to log on to a website and watch the performance over time.”

The Moore panel is the second photovoltaic system on campus. The first was installed on the roof of Murdough Hall in 1995. And there are more to come. McNamara says a bunkhouse under construction on the Moosilauke Ravine Lodge site is being equipped with a rooftop solar panel. Andrew Friedland, the Richard and Jane Pearl Professor in Environmental Studies and the chair of a task force now studying renewable energy options for the College, hopes the campus will eventually rely heavily on the sun for its energy needs.

“This single solar photovoltaic tracker will generate a tiny fraction of the electricity used on campus. But it’s a clear indication that the institution intends to reduce dependence on carbon-based energy sources. While this tracker generates roughly 4,000 watts, we hope in a year or two to be generating 400,000 watts or more with renewable solar electricity,” says Friedland.

The panel near Moore Hall is expected to take about a week to install, after which the website tracking its performance will be made available to the public.