The Cubs righty starts Friday in the first World Series game at Wrigley since 1945. 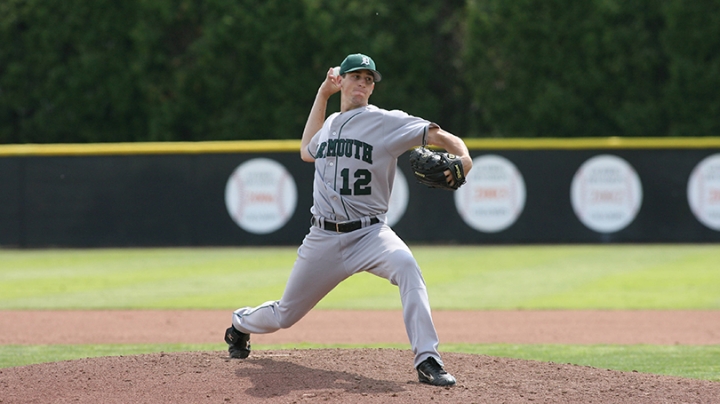 Kyle Hendricks ’12 pitches to a 5-4 victory over Princeton in the second game of the 2011 Ivy League Championship Series. It was his last appearance as a Dartmouth pitcher. (Photo by Beverly Schaefer)
10/28/2016
Body

The unflappable focus of right-hander Kyle Hendricks ’12 in the National League Championship Series win that sent the Chicago Cubs to their first World Series in 71 years was evident in his commitment to both pitching and academics at Dartmouth, say those who knew him as an undergraduate.

“It was really obvious to me from the very beginning that he’s a kid who didn’t just pay lip service to the idea of excelling as an athlete and as a student,” says head coach Bob Whalen, a 27-year veteran of Dartmouth’s baseball program.

“He really wanted to be good. He said to me from the beginning of the recruiting process that he wanted to go to the best school he could get into, but not at the expense of giving up his lifelong dream of pitching at the Major League level.”

Hendricks’ commitment to Dartmouth is widely reported in the sports media. During the National League Championship Series, Fox Sports 1 announcer Ken Rosenthal quoted Whalen, saying the assurance that Hendricks would be able to start in his first year at the College sealed the deal to bring him to Hanover.

But it was the commitment of Hendricks and his parents to his education that gave Dartmouth the edge, says his former coach, who recruited the righty out of Capistrano Valley High School in California. In fact, Hendricks passed on an offer during his senior year of high school to play for the Los Angeles Angels so he could attend Dartmouth.

“He’s a very bright kid. School is very important to him and always was. He was a major in economics, and always did well in his classes. He tutored other players on the team—even kids on other teams—in math if they needed help, because he knew the difficulty of being an athlete and being a student. And he was just a good friend,” Whalen says.

He was a good teammate, as well. As a freshman in 2009, Hendricks won the clinching game of the Ivy League Championship Series, pitching 7.1 shutout innings to advance Dartmouth to their first NCAA regional tournament in 22 years.

“I’ve always felt—and we say this to recruits—one of the greatest things about Dartmouth is we only want to recruit kids who want to be great at both school and baseball, without having to choose one over the other,” Whalen says.

Dartmouth professors share this commitment to educating the whole person, he says. “The faculty are supportive of the dreams and ambitions of all the young people who are here, and I think they do a great job of that.”

“He was quiet and very thoughtful, much like the way he pitches, always very intense and focused, and he knew what he enjoyed. He was really interested in some aspects of finance, and also international trade,” says Sacerdote, who was in the stands when Hendricks clinched the Ivy League championship in 2009.

Sacerdote was also chair of the economics department in the spring of 2014, when Hendricks graduated with a degree in economics modified by math. Hendricks finished his course work over two fall terms while playing professional ball for the Texas Rangers and then the Chicago Cubs. During this period, Hendricks researched and wrote a culminating economics paper titled “Trade Liberalization and Foreign Direct Investment.”

Sacerdote remembers it as “a very nice paper. I thought it was a very clever choice of topics and kind of a neat piece of empirical work.”

His teachers expected him to do great things, Sacerdote says, regardless of how his interests developed. But many were paying special attention to his pitching career.

Of course Dartmouth ball players have been watching Hendricks and the Cubs closely for a long time, particularly after another right-handed pitcher for the Big Green, Duncan Robinson ’16, was picked up in June by Chicago as an eighth-round draft pick.

At the last practice of the season on Monday, Whalen let a handful of the longest-suffering Cubs fans on the team wear their Cubs jerseys. Infielder Dustin Shirley ’18, who led the team in runs scored, doubles, triples, and stolen bases last season, was not a longtime Cubs fan, but he rooms with one, closer Pat Peterson ’18.

“He’s definitely a diehard fan. He’s from the Chicago area. He flies the ‘Cubs Win’ flag all the time. I’ve been keeping up with them quite a lot because he forces me to,” Shirley says.

And it’s been quite something to watch Hendricks, he says. “To see how he does his job—and he does it so well and keeps such an even keel throughout the game—is amazing. And it’s crazy to know that someone from the league that I’m playing in, at this level, is up there just making these professional hitters get out.”

He also shares Hendricks’ commitment to academics. Shirley’s lifelong goal is to play professional baseball, but he has a fallback option. “I could see myself, if baseball’s not working out, going to law school.”