As United Way campaign begins, the plan recognizes various ways to give. 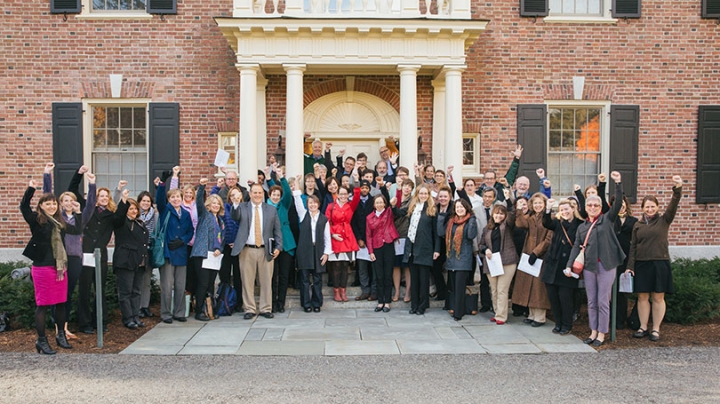 Dartmouth United Way campaign volunteers celebrate the kick-off of the 2016 campaign on the steps of the president’s house. (Photo by Robert Gill)
10/25/2016
Body

Beginning Jan. 1, Dartmouth employees will be able take a day of paid time off to volunteer with a United Way supported nonprofit agency, the College announced this week.

“As we begin this year’s United Way campaign, we want to recognize the outstanding contribution of time and resources Dartmouth faculty and staff already make to our community,” Mills says. “This new policy supports that vital work by offering a day of paid time off each year to volunteer.”

Mills says employees have gotten this year’s fundraising effort off to a great start. Dartmouth has raised $86,430 in the past two weeks, which is 31 percent of the way to the $275,500 goal.

In a personal appeal on behalf of the United Way campaign, President Philip Hanlon ’77 wrote, “Thanks, in advance, for your consideration and for demonstrating, through your actions, that Dartmouth is a community that cares deeply for others and is committed to helping those less fortunate than ourselves.”

Under the plan, employees can work with their departments to schedule paid volunteer time off, taken as a day, or two half days, during regular scheduled work hours, says Scot Bemis, chief human resources officer.

“Separate from the strong support we see for Dartmouth’s United Way fundraising effort, a lot of people find it very gratifying to give of their time, and we wanted to have another venue for people to give back to the community,” Bemis says.

Because of Dartmouth’s longstanding relationship with Granite United Way, which relies on local volunteers to review all agencies and programs that request funding, the College is assured that the group’s extensive list of nonprofits has been thoroughly vetted, Bemis says. In addition, the United Way is a national organization, so it can provide the same assurances about nonprofits to employees who live outside the Upper Valley.

“We are excited to support the important volunteer work many of our employees are already doing,” Bemis says.