The Eli Black Professor of Jewish Studies traces the roots of anti-Semitism in Germany. 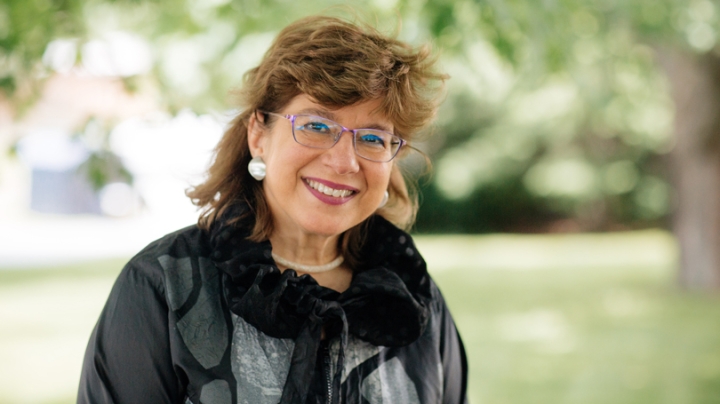 “It’s a great honor to receive an award for my scholarship from colleagues in my field,” says Susannah Heschel, the Eli Black Professor of Jewish Studies. (Photo by Robert Gill)
10/10/2016
Body

Susannah Heschel, the Eli Black Professor of Jewish Studies, has won international recognition for “outstanding scholarly contributions” to the study of German-Jewish culture.

The award comes from the Leo Baeck Institute, which honors Baeck, a rabbi who led Germany’s Jewish community under the Nazi regime. With offices in New York and Berlin, the institute’s 80,000-volume library, archives, and art collections contain material about Jewish communities in Central Europe over the past five centuries.

The prestigious Moses Mendelssohn Award presented this year to Heschel is named for an 18th-century German-Jewish philosopher and Bible translator.

“It’s a great honor to receive an award for my scholarship from colleagues in my field,” Heschel says. “It’s wonderful.”

At the Sept. 25 award ceremony in New York, Heschel gave the 59th Leo Baeck memorial lecture, “The Other in the Mirror: Jewish Interpretations of Christian and Islamic Origins.” She focused on Abraham Geiger and Heinrich Graetz, pioneering and controversial 19th-century scholars who were critical of each other’s work. The two men, Heschel says, “were given very different receptions by Jews in their day, and by scholars in subsequent generations.”

Heschel’s book Abraham Geiger and the Jewish Jesus, which won a National Jewish Book Award, brought Geiger, a pioneer of Reform Judaism, to public attention. “Geiger was influenced by German intellectual movements of the 19th century, but he also rebelled against some of the negative attitudes against Judaism that he experienced,” Heschel says.

Graetz produced “a narrative of Jewish experience from biblical times to the present that reflects the imperialist culture of Europe of his day, and that also provided a sense of national pride among Jews,” she says.

The Moses Mendelssohn award recognizes Heschel’s entire body of scholarship. “I am particularly interested in the history of biblical scholarship, Christian-Jewish relations in Germany, and German anti-Semitism”—all topics she grew up hearing about from her father, Abraham Heschel, a leading Jewish theologian who studied in Berlin under German scholars, including Leo Baeck.

During the Nazi regime, Abraham Heschel was arrested by the Gestapo and deported to his native Poland. He received one of only five visas provided by the U.S. State Department to save Jewish scholars, arriving in America in the 1940s, Susannah Heschel says. Members of his family were killed by German bombs or murdered by the Nazis.

“I grew up on the Upper West Side of New York City, surrounded by European Jewish refugee scholars, most of whom had either been born in Germany or studied in Germany,” says Heschel. “What I heard about growing up was German Jewish history and intellectuals, and I also heard about professors who had become Nazis. So I grew up feeling very immersed in that era.”

Heschel’s next book, soon to be published, is about how Jewish scholars view Islam.