Bill Phillips ’71 wrote the screenplay to “Christine,” a film that has taken on a life of its own. 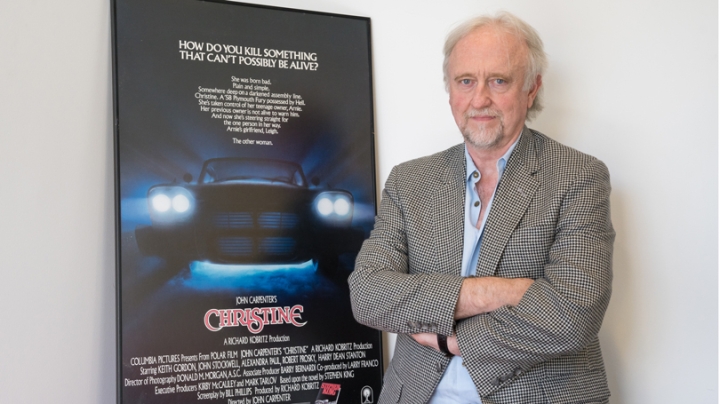 “I think the performances were just so honest and genuine that people relate to it,” says Bill Phillips of the movie Christine. (Photo by Eli Burakian ’00)
10/20/2016
Body

No one is more surprised than Bill Phillips ’71 that Christine, the 1983 “killer car movie” based on the bestselling novel by Stephen King—and the first Hollywood screenplay Phillips, a visiting associate professor who teaches screenwriting in the department of film and media studies, ever saw produced—has become something of a cult classic.

But Christine (the film and the eponymous vehicle) continues to strike a nerve in the American psyche, complete with Facebook groups and at least one fan who, Phillips says, “makes a side-living going around the country to auto shows and Comic-Cons” with a fully restored and automated version of the vengeful 1958 Plymouth Fury.

The replica Christine—which features self-locking doors, a self-starting engine, a green-glowing radio console, and the ability to fill up with smoke—will be on display in downtown White River Junction, Vt., on Oct. 21, and will be leading a procession of vintage cars through town. In the evening, Phillips joins the car’s owner, Bill Gibson, and horror expert Steve Bissette, a professor at the Center for Cartoon Studies, in a panel discussion at the Newbury Market (next door to the Hotel Coolidge), after which the film will be screened. The day’s events are free and open to the public.

Christine, directed by John Carpenter (who made the original Halloween), tells the story of high school outcast Arnie Cunningham, played by Keith Gordon. “He’s sort of a geeky loser-type with glasses and yogurt for lunch,” Phillips says. But when Arnie buys an old junker named Christine to fix up, everything changes. “He starts looking more like a young Elvis, and he loses his glasses. In the book he loses his acne, but who wants to watch acne on screen? And when people start hurting Christine to get back at Arnie, Christine kills them.”

Exchanging acne for glasses is just one of the adaptations Phillips made to translate King’s book to film. “One of my jobs was to make the killing more cinematic. In the book, Buddy Repperton, sort of the leader of the bad guys, is run over and left as a grease spot on the road. But that doesn’t translate to film very well. So we built a gas station, and Christine comes in, smashes Buddy’s car, blows up the gas station, chases Buddy down the road on fire, and runs him over, and now he’s left as a flaming corpse on the road. It’s a little more interesting to watch.”

Visiting associate professor and screenwriter Bill Phillips ’71 (right), with singer-songwriter George Thorogood on the set of Christine, in costume for a cameo that didn’t make the final cut—“mercifully,” Phillips says. (Photo courtesy of Bill Phillips)

At the suggestion of his then-girlfriend, Phillips proposed the soundtrack for Christine’s iconic opening scene on the assembly line: George Thorogood’s “Bad to the Bone.” “I remember the meeting I went into with the producer, Richard Kobritz, and John Carpenter—I said I just discovered this song, and I sang it for them: ‘B-b-b-b-bad.’ And they bought it.”

Phillips himself had a cameo in the film, with Thorogood, although their scene got left on the cutting-room floor—“mercifully,” Phillips says.

“I was the guy who ran the crane at the very end, when”—spoiler alert—“Christine is crushed into a cube. The first take, I’m sitting there pretending to run this crane, and the production assistant comes up and says, ‘Mr. Carpenter would like you to act taller in your next scene.’ I think they were just putting me on—how do you act taller? I don’t know if they ever intended to use it.”

Though Christine was his first script to reach the big screen, Phillips had written another King adaptation, of Firestarter, for Carpenter—a project that fell through. But the evil car launched a prolific career: Phillips has written screenplays for 50 films, including The Beans of Egypt, Maine, El Diablo, There Goes the Neighborhood, Shadow of a Doubt, and several independent productions, including Sabra, a 2015 documentary on Vermont artist Sabra Field.

Phillips says he enjoys writing in almost all genres—though he still likes the psychology of a good scary movie. Among his favorites that he didn’t write: The Exorcist (“When the little girl says to the astronaut, ‘You’re going to die up there,’ and then she wets the rug—that moment is like, oh my god. Chilling”), Alien (“What was so scary is that you hardly ever saw the creature—the horror was in your mind. That’s the best kind of scare”), and the 1931 Fitz Lang classic, M (“Back in the days of the Hays Code, when censorship reigned, filmmakers had to think of clever ways to get otherwise graphic ideas across. In M, a child-killer strikes, but they couldn’t show that, so they showed a playground ball bouncing alone. The audience supplied the rest”).

What’s the ongoing appeal of Christine? “Christine is a film that’s on the border between horror and—something. Maybe pathos,” Phillips says. “It doesn’t have a lot of scares in it. I think the performances were just so honest and genuine that people relate to it. I mean yeah, it’s ridiculous, a car that kills people. But King tapped into the fact that we all feel inadequate in high school. What I used to say is, this is a story about your possessions possessing you. Of course, when I was writing it, I was thinking, this isn’t just a killer car movie! But when it came right down to it, it’s a killer car movie.”

Written by
Hannah Silverstein, MALS ’09
Share this
FacebookTwitterEmail
In the News