Bringing people together has long been one of political operative Daughtry’s skills. 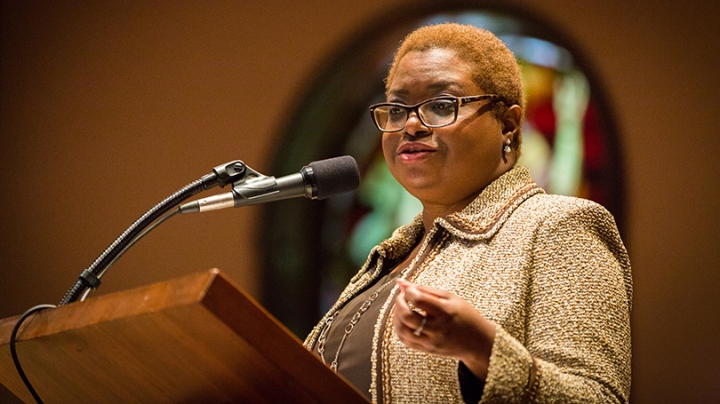 “We have a moral obligation, grounded in our common values, to live not as islands unto ourselves, but in a beloved community with each other,” Leah Daughtry ’84, pictured during a recent visit to Dartmouth, told the audience at the 2016 Democratic National Convention. She is the chief executive officer of the Democratic convention this year. (Photo by Joshua Renaud ’17)
10/03/2016
Body

The magazine checked in with Leah Daughtry ’84 before July’s 2016 National Democratic Convention, of which she was the CEO.

Daughtry, 53, who was in the final stretch of her second stint as CEO of the Democratic National Convention, had been in this position before. As the CEO of the 2008 convention, she experienced a contentious campaign that also stretched to the end of the primary calendar. And by the looks of her resume, Daughtry was an ideal choice again this time. A peacemaker by temperament, Daughtry has a long history of work and a deep well of trust with both candidates. Then-party chair Debbie Wasserman Schultz declared herself “thrilled” when Daughtry agreed to take the post. “She will bring so much expertise and enthusiasm,” Wasserman Schultz noted.

The responsibilities of the convention CEO are hard enough in a normal political year. The planning involves adherence to arcane and formal regulations that undergird the political process: the establishment of the party’s platform and its rules, the gathering of each state’s delegation, the voting and, eventually, the official nomination of a presidential ticket. And then there are the dizzying logistics. Daughtry and her team had to design and construct what was essentially a city within a city. She had to arrange lodging for 50,000 attendees, create a bus system to transport them from 95 hotels, oversee a veritable army to provide security and, most importantly, produce an enormous staged event that would embody all the pageantry needed to launch the party’s formal general election campaign for president with enthusiasm from rank-and-file party members.

To do this Daughtry was provided a $60 million budget, most of which came from corporate, union, and individual donors who gave to a Democratic Party fund or to a host committee led by the Philadelphia mayor Jim Kenney. By May she had built a staff of 90, which grew to 130 by July.